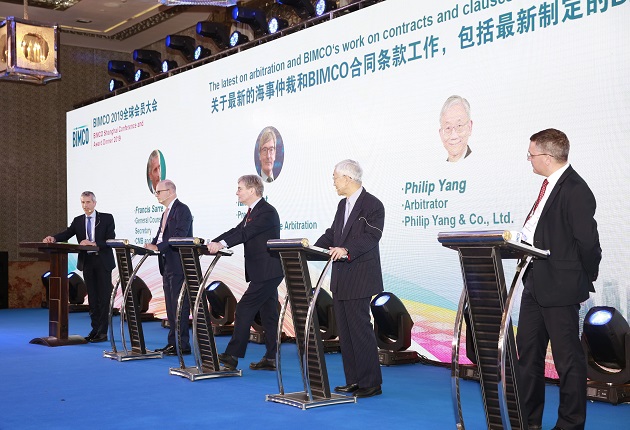 BIMCO has hosted a panel session on arbitration in Shanghai to discuss current issues such as the future of arbitration centres, the impact of BREXIT, the impact from the emergence of China as a leading shipping nation and much more.

The panel session on arbitration was held at the BIMCO Conference in Shanghai on 28 February before an audience of about 250 people. The  panel members were Hong Kong-based arbitrator and BIMCO Documentary Committee Member Philip Yang, David Roberts, Managing Director of the Standard Club Asia Ltd Singapore, HFW Shanghai Partner Nicholas Poynder and Ian Gaunt, President of the London Maritime Arbitrators Association.

The panel session discussed a number of current issues in international maritime arbitration. Topics up for discussion included the future of traditional and recently established arbitration centres, the impact of BREXIT on London arbitration and the continuing role in particular of English law and arbitration in maritime contracts.

It also discussed the impact of the emergence of China as a leading shipping nation and the potential for the conduct of international maritime arbitration in China, the role of mediation, conflicts of interest and bias as well as the panel’s views on the work of BIMCO in producing standard contracts and documentation for the maritime industry - notably its recently published sulphur clauses designed to address the 2020 IMO requirements.

More disputes to be solved locally in the future?

There was a broad consensus that English law would continue to find favour as the law of choice in most international contracts in the shipping industry, including charter parties, contracts of affreightment and contracts for the construction of ships and offshore units.

The English law is particularly valued for its certainty and for the large number of historical precedents reflected in case law. Other potential arbitration venues have increasingly accepted that English law will continue as the preferred substantive law of contracts and, based on this, have promoted themselves as seats where arbitrations arising from English law contracts could be adjudicated.

This has however not so far found great favour and in recent years, the numbers of maritime arbitrations seated in London has remained quite constant at levels which far outstrips the competition.

Nevertheless, David Roberts observed that, as Asia gradually increases its share of global tonnage - currently almost 50% - it would be strange if pressure does not grow for more disputes to be resolved locally in key maritime centres such as Singapore, Hong Kong and Shanghai.

“The considerable commitment made, for example by Singapore, in recent years in developing enviable dispute resolution infrastructure, could put them in a good position to compete going forward,” David Roberts said.

One of the particular selling points of London is the availability of a right of appeal on points of law which is not available in almost any other competing jurisdictions. This is also the case for the belief that English qualified lawyers, arbitrators and judges are probably best placed to handle English law disputes and decide on appeals. Appeals are in fact quite few but the availability of the right of appeal offers parties a “safety valve” which many in the industry appreciate.

From the panel discussions, it was felt that overall legal certainty and finality is not materially affected by these factors.

According to Philip Yang, Hong Kong is in as good a position as Singapore to attract arbitration business involving mainland Chinese interests because of its geographical proximity, expertise and personal familiarity. So far, Singapore has attracted considerably more arbitrations from India than from mainland China.

The panel agreed that, although much talked about, BREXIT will have no major impact on London arbitration. This is because London arbitration awards are enforceable under the UN New York Convention which has nothing to do with Britain's membership of the European Union. The fact that P&I Clubs, which generate a significant amount of appointments in London, have sought a seat or passport for their P&I business in the European Union as a result of a possible BREXIT, would not in David Roberts’ view have any material influence on appointments in London in favour of more European-orientated or other seats.

More scope for mediation in the industry

According to Nicholas Poynder, this is one of the reasons why international maritime arbitration in China has developed rather slowly. In addition, this might be expected to hamper its growth in the future, as it is, with narrow exceptions, not possible to conduct arbitration with a Chinese seat, except under the auspices of an arbitral institution such as the China International Economic and Trade Arbitration (CIETAC) or China Maritime Arbitration Commission (CMAC).

David Roberts added during the discussion that, as the liability and legal costs insurers, the P&I Clubs ware against “conveyor belt” arbitration or court proceedings with the attendant costs and risk implications.

“Therefore, mediation could be highly effective and should be considered more frequently as an alternative, or in addition to the more traditional processes,” David Roberts said

Ian Gaunt emphasised the fact that some 80% of awards in London are issued on the basis of documents-only arbitrations without an oral hearing, and that this generally cuts expenses considerably.

A major factor favouring London is the expertise, not only of the large number of experienced arbitrators, but also the experience of over 40 specialist maritime solicitors’ firms and specialist barristers, and of judges with experience of maritime cases in practice.

More opportunities ahead for Asian arbitrators in London

The expertise from London not only contributes to efficient handling of cases in arbitration, but also to the effective settlement of many cases which never reach the stage of arbitration.

The concentration of a large number of cases among a limited number of arbitrators in London has attracted attention. According to David Roberts however, the P&I Clubs are not concerned about bias on the part of maritime arbitrators. Also, challenges to arbitrators on the basis of actual or apparent bias are extremely rare.

According to Ian Gaunt, the LMAA is keen to expand the available pool of arbitrators capable of handling LMAA arbitrations, and this should not be limited to UK nationals or residents. The LMAA did not maintain a panel as such; foreign arbitrators would be welcomed, providing that they have knowledge and experience of arbitral procedure, as well as maritime business or legal experience.

In fact, LMAA is generally open to the parties in an LMAA arbitration to appoint anyone of their choice as arbitrator, whether or not they are a full or other member of the LMAA. As the LMAA is relaxing the residence requirements for their member arbitrators, there will be opportunities for Chinese or other Asian nationals to become qualified arbitrators in London, thereby enhancing the attractiveness of the ad hoc London procedure for Asian participants.

The panel appreciates the work of BIMCO in producing standard documentation for use in the shipping industry. They see scope for greater use of the NEWBUILDCON contract in shipbuilding and believe the sulphur clauses developed by BIMCO can help provide a clear allocation of risks and expenses and avoid potential disputes in the future.

Contact online
BACK TO: BIMCO initiates work on new ASV charter for the offshore sectors NEXT: BIMCO issues new Shipmanagers’ Letter of Undertaking

By Søren Larsen
in Copenhagen, DK