According to BIMCO estimates from the upcoming Dry Bulk Shipping Market Overview and Outlook report, deliveries of bulk carriers should drop to 23.8 million DWT in 2024. The sector’s orderbook currently adds up to 66.7 million DWT, a mere 6.9% of the bulker fleet, the lowest ratio since at least 1996.

Contracting of bulk carriers spiked in 2021 and reached 48.4 million DWT, driven by a positive congestion driven cycle which brought an opportunity for investment. However, in the first ten months of 2022 only 11.7 million DWT were contracted as concerns about economic growth and alternative fuels dominated the sector. 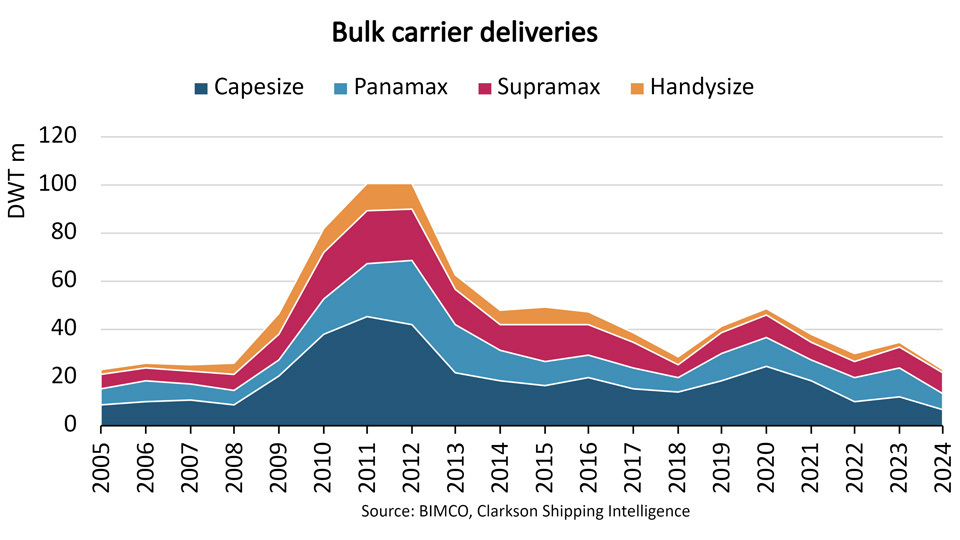 In terms of size, upcoming bulk carrier deliveries are increasingly skewed towards panamax and supramax ships. Capesizes will account for around 27.8% of deliveries in 2024, significantly lower than their 40.9% ten-year average. Weaker and volatile rates and a 0.6 ratio between prices for newbuildings and 5-year-old ships are hindering contracting in the segment.

The sector’s response to fuel transition and emissions reduction has thus far been slow, as demonstrated by the orderbook. Measured in deadweight, only 13.3% and 6.0% of deliveries until the end of 2024 are LNG and ammonia ready, respectively, while only two panamax ships are LNG ready.

The continued economic downturn will likely affect investment decisions and keep the orderbook small. However, the average bulk carrier age has risen by six months each year since 2018 and the average bulker is now eleven years and six months old. Amid stricter environmental regulations and an aging fleet, renewal of the fleet will be required, and we can expect contracting to pick up across all segments towards the end of 2023.

Alternative fuel adoption among bulk carriers will likely continue to lag behind other sectors. However, by the next contracting cycle, a clearer roadmap for the adoption of alternative fuels will hopefully have emerged.

By Filipe Gouveia
in Copenhagen, DK