In September 2022, head-haul and regional export volumes were down 9.3% y/y according to Container Trade Statistics. Head-haul trades fell 15.5% whereas regional trades were down 0.7%. At the same time, volumes were 0.2% lower than in September 2019. The volume decline represented the first month since June 2020 to see lower volumes compared with the same month in 2019 and could be a warning that laid up ships and further freight rate reductions are on the horizon.

In September 2022, head-haul and regional trade volumes were lower than in 2021 into all import regions except the Far East. Remarkably, volumes into North America, which led the surge in volumes during COVID, saw the greatest loss at -20.6% y/y. 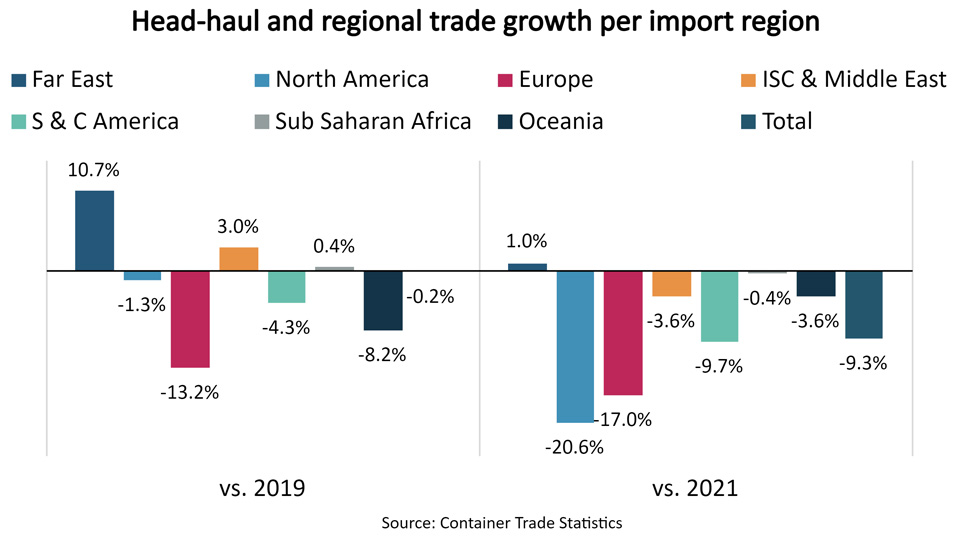 In total, volumes in September were 1.1 million TEU lower than a year ago and 20 out of 28 region-to-region trades showed negative growth. At the same time, 13 trades recorded lower volumes than in September 2019. Out of the top 10 region-to-region trades which cover nearly 90% of all volumes, the trades into Europe are unsurprisingly doing the worst compared to 2019. The Far East-Europe trade was down 18.8% while the Intra Europe trade declined 11.5%.

The abrupt slowdown in volumes to North America and Europe comes after 9-12 months of the fastest increase on record in business inventories in both the US and the EU. It is therefore likely that the lower volumes reflect a need for businesses to both trim inventories and adjust ongoing imports to expected lower sales as prolonged high inflation is taking a toll on consumers and businesses.

No matter the reason for the low volumes, at this level of volumes, the remaining congestion that has helped to prop-up the supply/demand balance should dissipate quickly. The liner operators will then be left with lower volumes than in 2019, a fleet that has grown 11.8% since then, an orderbook set to add 9.9% to the fleet in 2023, and poor prospects for the global economy. EEXI and CII regulations may absorb as much as 10% of the fleet in 2023, but unless the markets surprise positively, we must still expect to see numerous laid up ships or freight rates that continue to move quickly downwards, or both.