High energy prices in Europe have shifted aluminium production to China. Due to China’s increasingly depleted bauxite reserves, this shift has resulted in an increase in bauxite shipments, benefitting the capesize segment. Guinea, the world’s largest exporter of bauxite, accounts for around half of traded volumes and has seen a 14.9% increase in bauxite shipments so far in 2022.

Growth in bauxite and coal volumes have provided some relief for capesizes this year, however, the Baltic Exchange's Capesize 5TC index has still fallen on average 50.6% y/y due to a decline in Chinese iron ore demand and reduced congestion.

Weaker iron ore demand led operators to relocate ships to alternative trades such as the bauxite trade out of Guinea. Capesizes have accordingly become increasingly dominant, handling 86.2% of volumes in 2022 compared to 78.8% in 2021, pushing smaller segments out of the market. Combined with an increase in exported volumes, capesizes have carried 27.4% more Guinean bauxite so far in 2022 than in 2021. 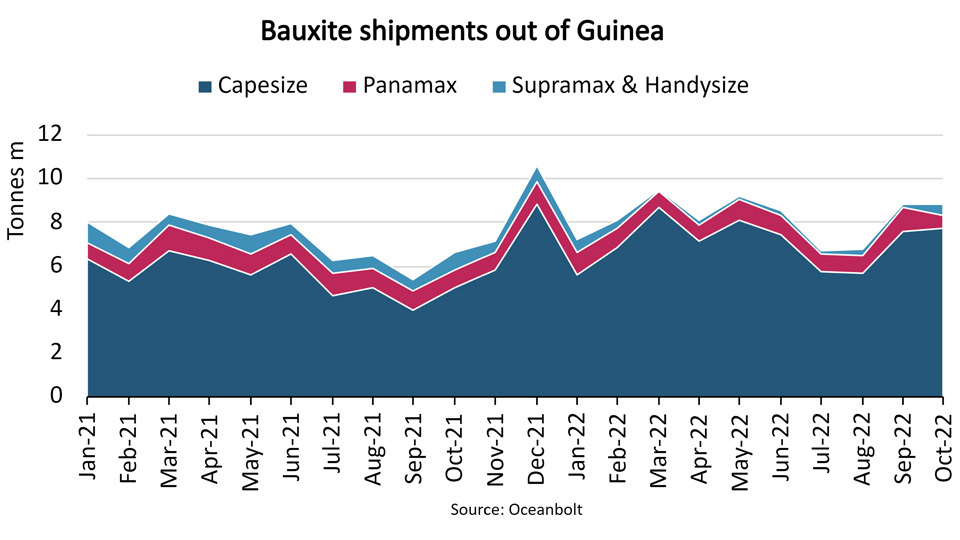 Guinea is currently governed by a military junta which took power in September 2021. The promised transition back to democracy has recently been delayed to September 2024. This decision has caused social unrest and demonstrations, which could threaten the country’s stability and economy.

In April 2022, Guinea’s military junta presented bauxite mining companies with an ultimatum demanding investment plans for alumina refineries by June 2022. No further information has been shared about these investment plans since then.

Energy is a key challenge for alumina refinery projects in Guinea, due to refineries’ high energy requirements. Less than half of Guinea’s population has access to electricity and the country lacks fossil fuel reserves, heavily relying on hydro power. Alumina projects will likely require the construction of new coal- or oil-fired power plants, increasing Guinea’s energy import needs.

It appears unlikely that the energy required for alumina production will become available in Guinea in the short-term. This should be a relief to capesize owners as alumina refining of four tonnes of bauxite results in only one tonne of alumina. Increased alumina refining would consequently reduce export volumes from Guinea.

By Filipe Gouveia
in Copenhagen, DK