If the cargo is harmful to the marine environment (HME) in accordance with MARPOL Annex V, the Charterers shall be responsible for all extra costs and time and/or losses incurred by the Owners associated with the storage, removal and disposal of HME cargo related residues and/or hold washing water. Compensation for such extra time shall be in an amount equivalent to the rate of demurrage stipulated in the charter party. Storage, removal and disposal shall always be in accordance with MARPOL Annex V or other applicable rules.

Amendments to MARPOL Annex V covering the disposal of cargo residues and hold washing water containing materials that may be “harmful to the marine environment” (HME), took effect in January 2013. In July 2013, a revised version of the BIMCO Hold Cleaning/Residue Disposal Clause for Time Charter Parties was issued (see Special Circular No. 6 – 18 July 2013) holding charterers responsible for the costs and time of removal and disposal of HME cargo residues and hold washing water.

Under a voyage charter party, cargo residue removal and disposal would normally be for owners’ account. However, there is at present no definitive list of HME substances, leaving determination to be made subjectively by reference to listed criteria. In turn, this relies on the accuracy and integrity of shipper declarations or decisions made by port or other officials. This, in itself, is an unsatisfactory situation and when coupled with the lack of suitable cargo reception facilities in many ports, exposes owners to the risk of unexpected additional costs which might not be easily recovered from a counterparty.

In order to address the circumstances set out above, a new Clause has been developed. Under this provision, the normal position is reversed so that charterers are responsible for additional costs incurred in connection with the removal and disposal of HME cargo residues and/or hold washing water.

The provisions are contained in three sentences. The first sentence sets out the key elements of the Clause covering the triggering mechanism and charterers’ resulting responsibilities and liabilities.

Specifically, the Clause applies whenever a cargo is held to contain HME properties. It does not address the problematic question of which party is responsible for determining the HME nature of a particular cargo, but takes effect regardless of whether a declaration has been made by cargo interests or regulatory authorities. Where the provision is triggered, charterers are responsible for all extra costs and time and/or losses associated with the storage, removal and disposal of HME cargo related residues and/or hold washing water. In this context, “extra costs” means those over and above the costs of cleaning, washing or sweeping holds which are ordinarily incurred by owners  on completion of cargo discharge (and included in the voyage freight) together with any losses sustained by owners such as reduced cargo intake on a subsequent voyage where, due to inadequate reception facilities at the discharge port, residues or water have to be stored on-board for later disposal.

The second sentence states that any extra time used in connection with disposal is to be compensated in an amount equivalent to the charter party demurrage rate.

In accordance with the third and final sentence, storage, removal and disposal of cargo residues or hold washing water must always be in accordance with MARPOL Annex V or other applicable rules.

As noted above, this might mean that residues have to be carried beyond the contractual discharging port. In such event, consideration should be given to the implications under any subsequent or separate fixture of deviation for disposal or reduced cargo intake.

BACK TO: Himalaya Clauses for Passenger Tickets NEXT: Hold Cleaning/Residue Disposal Clause for Time Charter Parties 2013 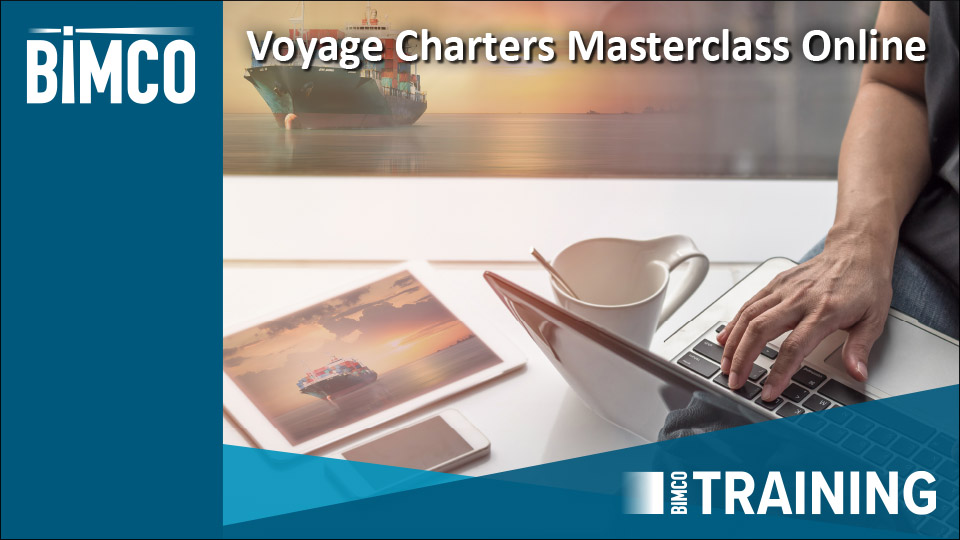 Voyage Charters Masterclass Online is a series of 10 online sessions delivered over 5 days. Each day will run for 120 minutes with a short break in between. Thi...
More info