On 30 September 2022, China added 15 million tonnes to its 2022 export quota for oil products. The quota includes 13.25 million tonnes for gasoline, diesel and jet fuel as well as 1.75 million for low-sulphur marine fuel. If headed for the EU, it could be a welcome addition to the block seeking to replace on average 2 million tonnes of diesel imports from Russia when sanctions take effect from February 2023 and demand for heating increases in the winter months. It could also add some attractive tonne miles for product tankers.

During the first nine months of 2022, exports of gasoline, diesel, and jet fuel have been 45% lower than in 2021. So far, 18.4 million tonnes have been exported, leaving 18.85 million of the full year export quota unused. To fill the full year quota, average monthly exports during the fourth quarter would have to triple compared to year-to-date. This appears unlikely and many analysts are expecting that refineries will be allowed to make use of the 2022 quota in 2023.

Chinese exports of diesel have been particularly low in 2022. During the first nine months of the year diesel exports have fallen 72% y/y. A return to 2019 levels could increase average monthly diesel export volumes by 1.3 million tonnes to 1.8 million tonnes. 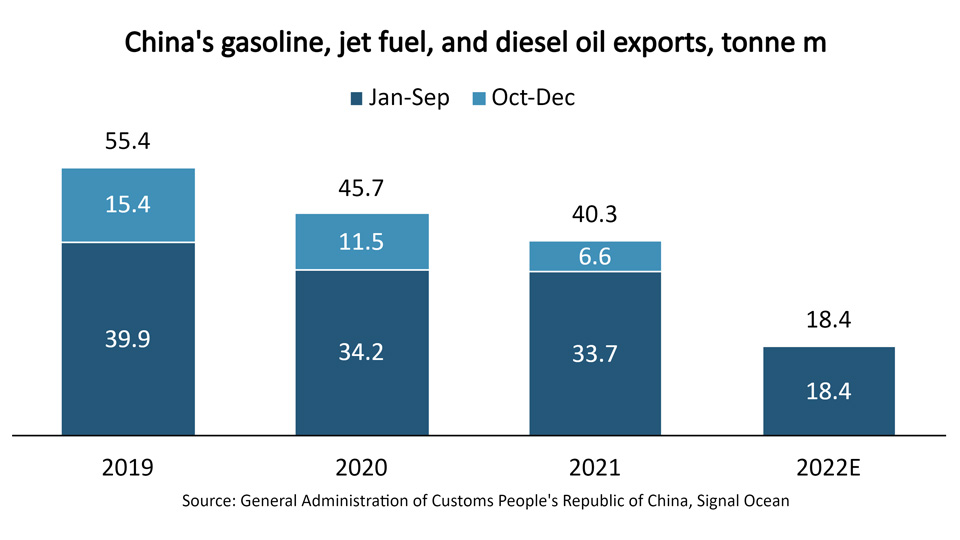 Increased diesel exports are of particular interest as EU’s sanctions of Russian refined oil products will be implemented on 5 February 2023, and since 90% of the import volumes is diesel. By now, the EU’s imports of Russian crude oil are almost 25% lower than last year, however, diesel imports from Russia have not yet been reduced.

Starting in February 2023, the EU must replace on average 2 million tonnes of diesel imports from Russia. In addition, the International Energy Agency has estimated that the EU’s demand for refined products will increase by 300,000-500,000 barrels per day during winter to meet heating demands. A possible increase in Chinese exports could make this process a lot easier and provide a business opportunity for Chinese refineries as well as some very attractive tonne miles for product tankers.

However, the recently announced 2 million barrels per day production cut by OPEC+ may increase price volatility and increase the risks that Chinese refineries face when exporting to Europe. Any price reduction between when the crude oil is bought, and when the refined product can be sold, can lead to losses for the refineries. As the time delay between buying and selling is higher when exporting to Europe, the price-related risk is higher. The Chinese refineries may therefore also focus the increased exports on Southeast Asia. In that case, the volumes will most likely replace volumes from India and the Persian Gulf that can then head to the EU instead.