Container volumes in head-haul and regional trades are the key drivers of container vessel demand, average container rates, liner operator profits, and, since 2020, port congestion. According to Container Trade Statistics, combined head-haul and regional trade volumes fell 0.4% y/y in the first half of 2022. Head-haul volumes were 1.3% lower than a year ago while regional volumes were 0.6% higher. Under normal market circumstances the peak season in key head-haul trades should lift Q3 volumes. However, recently released volume statistics indicate that there may be no peak season in 2022 but it is very likely that volumes will slow in Q4.

In July, the combined head-haul and regional trade volumes fell 1.5% m/m but were up 1.5% y/y. While this initially seems to be a relative improvement in volumes, compared to first half results, the figure appears in a different light when historical seasonality is considered.

As an example, in the Far East to North America trade lane, volumes in July have historically been on average 7.0% higher than June volumes due to the beginning of the peak season. However, this year volumes were 3.3% lower in July than in June. Applying historical seasonality, volumes should have been nearly 200,000 TEU and 10.6% higher than actual volumes.

Using the same principle for all head-haul and regional trade lanes, the combined July volumes should under normal circumstances have been 3.3% higher; 4.3% higher in head-haul trades and 1.9% in regional trades. Overall, volumes would then have been 4.9% higher than July 2021 instead of 1.5%. This is partly because it in 2021 was the first time in recent years that volumes in July were lower than in June. 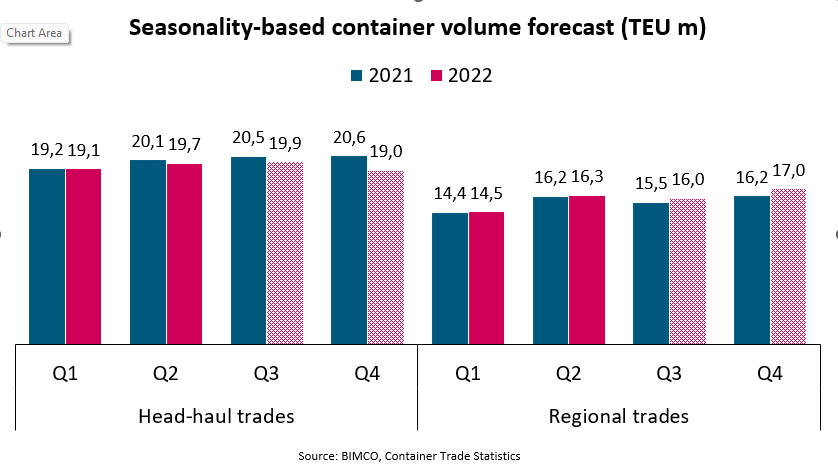 Focusing on the rest-of-year period from August to December, the calculation indicates that combined head-haul and regional trade volumes will be down by 1.9% y/y. From a congestion perspective it is interesting to note a 10.7% y/y and 8.2% y/y fall in import volumes to the Europe and Mediterranean region and North America respectively.

Considering the risk of energy shortages in Europe during winter and that conditions for consumers and businesses are likely to get worse before they get better as the year progresses, it is possible that volumes could end even lower.

Though we appreciate that this approach to forecasting rest-of-year volumes may be somewhat simplistic, the overall forecast does tally with the economy-based forecasts in our recently published Container Market Overview and Outlook report. The prediction will most likely not end up 100% accurate, but we do believe the overall trend will end up correct, confirming a very muted peak season in key head-haul trades and lower Q4 volumes in line with normal seasonality.

Contact online
BACK TO: Crude oil tonne miles out of the Gulf of Guinea down 5.9% so far in 2022 NEXT: Ukraine exports reach 2.1 mln tonnes under grain deal, Russia raises fresh concerns