On 9 August, the Indonesian Energy and Mineral Resources Minister announced that 71 coal miners failed to meet their domestic market obligations, and that 48 of them are now banned from exporting coal. The ban comes into force just as the EU ban on Russian coal takes full effect and demand for non-Russian coal increases.

Indonesia is the world’s largest exporter of coal. In January 2022, the country had a full coal export ban in place with the aim to protect domestic supply. Since the ban was lifted in February, miners have been obligated to sell 25% of coal in the domestic market to protect against future energy crises.

Despite legislators’ concern over shrinking domestic coal stocks, another outright ban of all coal exports remains unlikely for now. Inventories in the state’s power utility company PLN remain above 4.5 million tonnes, a level considered to be secure.

The names of the 48 miners have not been revealed and the Indonesia Coal Mining Association are contesting the ban. 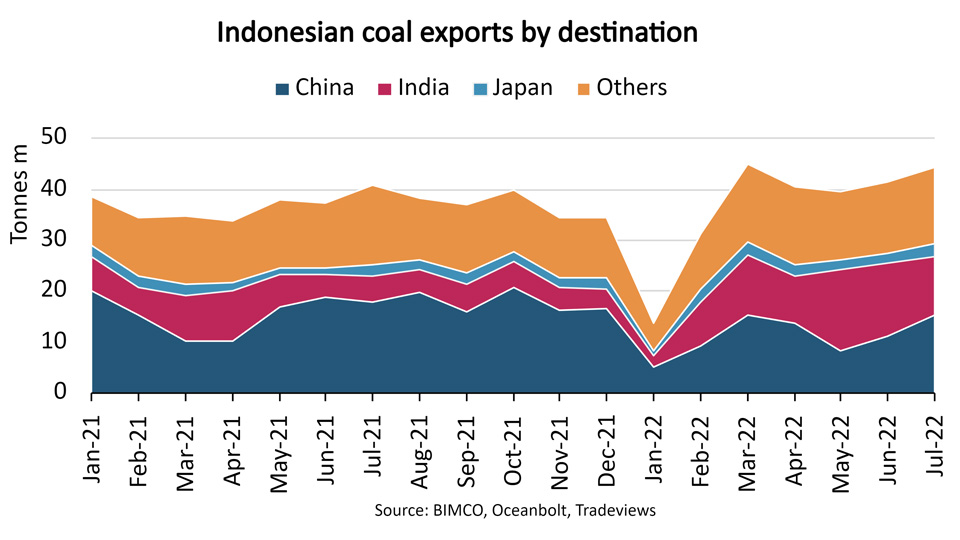 The announcement comes only one month after Indonesia pledged to increase coal production to help meet demand from countries that have lost supplies from Russia.

Indonesia is the world’s largest exporter of coal. In 2021, the country exported 441.5 million tonnes coal equal to 31% of global coal exports. All exports are moved by ship and in 2021 were equal to 8% of global dry bulk cargo demand.

The partial Indonesian export ban coincides with the full implementation of the European Union’s ban on Russian coal. In 2021, The EU imported 39 million tonnes of coal from Russia, equal to 36% of EU coal imports. The EU’s demand for coal has increased year-to-date and is expected to increase further as the bloc turns to coal to replace missing natural gas supplies from Russia.

The EU’s ban on Russian coal increases demand for non-Russian supply by about 4% and a sustained partial ban of Indonesian exports will obviously not help. It makes it even more likely that India and China will buy more of their coal from Russia in the coming months. Combined, the two shifts in supply patterns will drive up average sailing distance for global coal shipments and bulk demand overall.