Exports from the major US west coast container ports took another hit in July, falling to their lowest level since at least 2010, the earliest BIMCO has data for.

Exports from the major US west coast container ports took another hit in July, falling to their lowest level since at least 2010, the earliest BIMCO has data for. Just 327,417 TEU have been exported with goods. In contrast exports of empty containers have been record high this year with July seeing 770,475 empty TEU exported. Still, this marks a decrease from May when they totalled 876,506 TEU. In the first seven months of the year have totalled 5.3m TEU, up 57.6% from 2020.

Laden container exports have been under pressure not only from lower exports from the US manufacturers as a direct result of the pandemic and the weak recovery of the sector, but also because of the pressure the container shipping industry is currently facing. Carriers are desperate to get containers back to the Far East as fast as possible for their next fronthaul load, even if this means sacrificing a backhaul load. Full warehouses and delays in hinterland transport all make it harder for exporters to secure the containers they need for their exports. 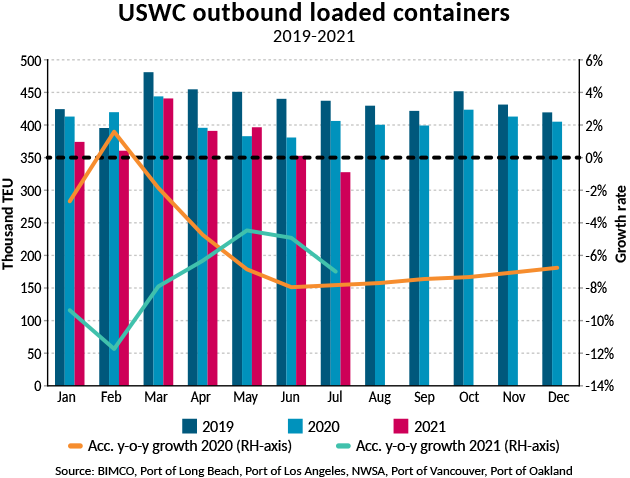 Pandemic has accelerated years of decline

So far this year, a total of 2.6m TEU of laden containers has been exported by USWC ports, a 7.0% drop from the same period in 2020, which was itself down 7.8% from the first seven months of 2020. USWC exports of laden containers had already been falling before the pandemic and the current disruption. The last time there was any meaningful growth was in 2016 when laden exports rose 7.3%. Since then, laden container exports have fallen year-on-year in every year except for 2018 when they grew by a measly 0.3%.

“The 7% year-on-year drop in accumulated laden container exports from the US West Coast is just another example of how disruptions to the container shipping market over the past twelve months are affecting trade. Laden exports have been on a downward trend since March and as congestion, port waiting times and the container shortage remains high, exporters may continue to struggle finding containers for their goods, even as US manufacturing, and thereby potentially also exports recover from their pandemic slump,” says Peter Sand BIMCO’s Chief Shipping Analyst.

For more analysis on the container shipping market, as well as the global macroeconomic situation, dry bulk and tanker shipping, check out BIMCO’s latest Shipping Market Overview and Outlook.

BACK TO: Chinese coal imports from Australia drop 98.6% as restrictions bite NEXT: China’s 49.2 manufacturing PMI indicates falling activity in August