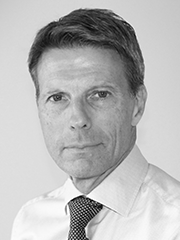 Following his graduation from Copenhagen University and the Institute of Maritime Law, Søren Larsen joined BIMCO in August 1985.
He was appointed Head of Department for Documentary and Legal Affairs in 1993 and became Deputy Secretary General, with primary responsibility for BIMCO’s documentary affairs, in 1999.
From 2005 to 2009, Søren Larsen assumed particular overview of the Documentary, Security & International Affairs, and Services Departments at BIMCO and is currently primarily responsible for BIMCO’s Contracts & Clauses and Support & Advice departments. In addition, he represents BIMCO’s and shipowners’ interests in various international fora, such as the IMO, UNCITRAL, ICC and CMI and works closely with the Secretary General in the management of the BIMCO Secretariat.
He has represented BIMCO at meetings with various government bodies in the United States.

BACK TO: Simon Ward NEXT: Stephen Mackin