Unequal vaccine distribution has put a stopper in the recovery in parts of the world, adding to supply chain disruptions and slowing growth even in countries protected by higher vaccination rates. In a globalised world, no one can return to normal before everyone can.


The world is increasingly divided between countries where high vaccination rates are protecting populations, and thereby protecting the economies, and countries at the other end of the scale where vaccination rates, in some cases, still stand in single-digits. This divide, coupled with the COVID-19 Delta variant, which has increasingly broken through the defences that kept many countries almost COVID-free, has prompted the International Monetary Fund (IMF) to revise its GDP growth forecast for 2021.

Low vaccination rates and another wave of COVID-19 cases has hindered the economic recovery of many Asian countries as some battle their worst caseloads since the start of the pandemic. A prime example is Vietnam, which until recently had been very successful in its handling of the pandemic. However, the Delta variant and low vaccination rates have led to a rise in infection numbers over the summer and widespread lockdowns as a result.

During the first half of the year, Vietnamese exports were up by 28.4% year-on-year, and industrial production increased by 9.3%. Prior to the effect of the recent lockdowns being felt, the economy grew by 6.6% in Q2 2021 compared with the same quarter in 2020. However, the latest outbreak has forced many factories to shut down, and the manufacturing PMI index indicates month-on-month declines in June, July and August. In August, the overall PMI stood at 40.2, with production experiencing its steepest decline since April 2020. In addition to production taking a hit, transport links have been affected, causing headaches for shipping, in particular container shipping, as ports are forced to operate below capacity. 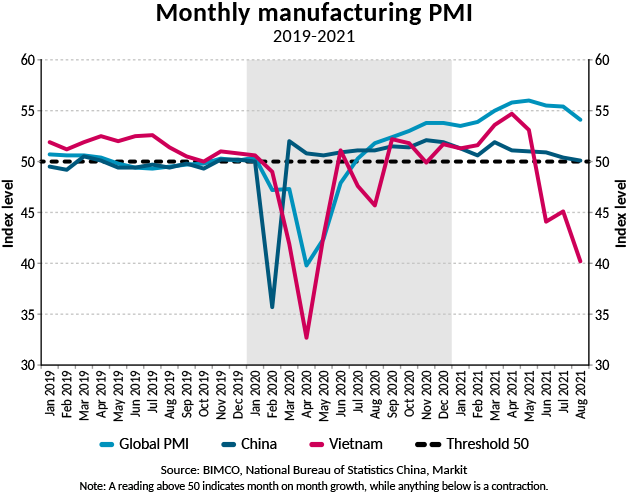 Similar problems are arising elsewhere in Asia, including China, where a zero-tolerance COVID-19 elimination strategy means that hard lockdowns are difficult to predict and damaging when implemented. As well as targeted lockdowns, which include ports and terminals, new restrictions on domestic travel have been enforced. The number of domestic flights in China dropped by around a half between the end of July and 9 August to 5,785 flights, affecting demand for oil products. By 30 August the number of domestic flights had risen to 8,244 (-31% from January 2020). The number of international flights remains down by 72% compared to January 2020.

In the second quarter of the year, Chinese GDP increased by 7.9% from the same period in 2020, far below the 18.3% recorded in the first quarter of 2021, although this was against a much lower base of Q1 2020. Growth in industrial production in China has also slowed as supply chain woes accumulate. Industrial production grew by 6.4% in July compared with the same month in 2020, the lowest year-on-year increase this year, with accumulated year-on-year growth slowing to 14.9%. This can be explained by the current sluggish recovery overall, as well as a higher base in 2020, when the Chinese economy picked up in Q2 2020.

Also pointing to slowing growth is the manufacturing PMI, which barely rose above the threshold of 50 - which indicates growth – and stood at 50.1 in August. In fact, the rate of growth has now slowed in every month since March. In contrast to the overall PMI, the new export orders index has declined over the past four months. The index registered its sharpest drop of the year in August to 46.7, its lowest level since June 2020.

Neither the economic bloc, nor any of the five largest economies in the EU, are expected to return to their 2019 strength this year, although the Netherlands, appearing in the top five now that the UK is out, will be just 0.5% smaller this year compared with 2019, according to forecasts by the European Commission. In contrast, economic growth in the EU is forecast to be up 3.0% on 2019 levels in 2022, with Italy being the only one of the top five economies forecast not to record any growth. The Commission forecasts that the country’s economic output in Q4 2022 will be about 1% below its pre-pandemic levels. 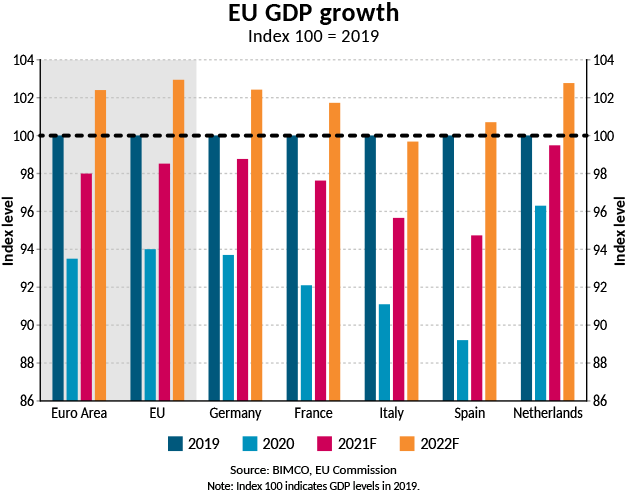 Over the summer, the recovery in Europe has been driven by the re-opening of service sectors, as the vaccine roll-out has allowed a gradual re-opening of nations despite the spread of the Delta variant. Working against this positive development, and worrying for shipping, is the fact that problems in production and higher costs are hurting manufacturing. These difficulties include shortages and higher prices for inputs, transport difficulties as well as staff shortages. This is a complete turnaround from much of last year and the first quarter of this one, when manufacturing and production outperformed services.

In the UK, these problems are even more pronounced, since production as well as transport facilities are short of workers, due to a combination of the pandemic and Brexit. This shortage has left the UK with greater supply chain problems than those faced by the rest of the world, and UK restaurants and shops are currently struggling to get enough stock to meet demand. Compared to February 2020, June 2021 GDP data showed that the UK economy had contracted by 2.2%, with services declining less than manufacturing: 2.1% compared to 2.3%, respectively.

Still capping growth are the net effects of trade, with total exports down 9.9% from Q2 2019, while total imports are up marginally by 1.7%. As shipping can easily testify, imports of goods alone have been much stronger; up by 6.3% in Q2 2021 despite the widely discussed problems of getting goods into the country. Imports of goods account for almost 90% of total US imports, with the remaining 10% coming from services, which are still down by 17.4% compared to Q2 2019.

Having now achieved a milestone level of economic growth that exceeds pre-pandemic levels, the speed of recovery in the US appears to have peaked. Rising cases of Delta variant infections, particularly in communities with low vaccination rates, have resulted in new restrictions and a slowing down of recovery in the services sector. Also capping the pace of the recovery are shortages, both of materials and labour, as well as capacity pressure, which has caused a rise in prices. This, along with the ending of additional unemployment benefits, are all contributing to a slowing down of the GDP growth rate.

Despite this, demand for imported goods is set to remain strong as the holiday season approaches. Inventories will need many months to be re-stocked, leaving little room for a desperately needed post-peak season breather for container shipping later in the year. In June, the US retail inventory to sales ratio stood at 1.05, slightly up from 1.04 in May, but still far below the figure of 1.47, which was the average between 2018 and 2019. 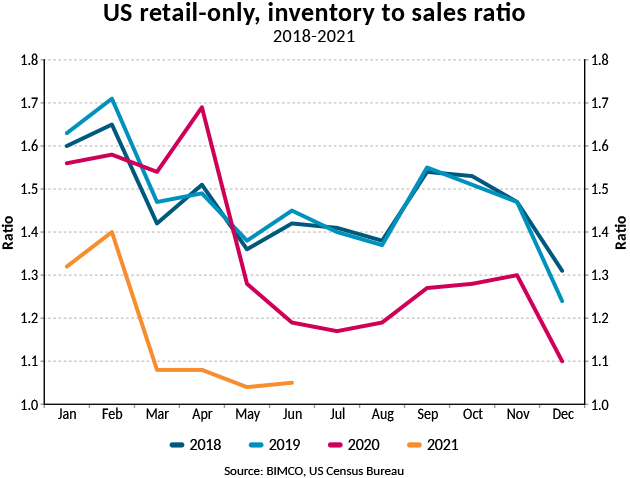 
The diverging paths on the road to recovery for advanced and emerging economies pose a threat to global economic recovery. This is due to a combination of the threat of new virus mutations and the increasingly divergent paths between countries that are ahead with their vaccination roll-out programmes and those that are behind. Satisfying high demand in a more or less restriction-free world in some parts of the world is hampered when many of world’s major production hubs are struggling with rising infection rates.

The OECD has warned that most of the world’s major economies have already achieved their peak growth rate this year, and while they will continue to grow, it will be at a slower pace. The “easy” gains derived from the re-opening of economies have been realised and the next gains in line will be more challenging, not least because key industries are prevented from realising their true potential due to external factors, such as material and labour shortages.

The big question for everyone in shipping, and for the rest of the world for that matter, is how the supply chain disruptions will develop. Despite services re-opening and accounting for a larger share of consumer spending, demand for goods in the developed world will remain high, as wholesalers and retailers will need many months to get their stock back to levels they are comfortable with after this unprecedented period. This means that even if manufacturing and supply chains can keep up, it will be well into 2022 before there can be any talk of a “normalisation”.

So, can supply chains keep up? The development of the pandemic in many of the world’s major producing countries has exacerbated the problems, as factories and ports are closed in an attempt to contain the virus. This causes more delays, and a return to normal will take longer. All eyes will be on China, which is dominating production to a large degree, and on whether the country will continue to pursue a COVID elimination strategy despite the severe economic consequences for both itself and all of the countries that depend on receiving its goods. A prolonged COVID elimination strategy from China would likely lead to more closures of factories and ports, with very little predictability as to where they will hit or how long they will last.

Global shortages of inputs, low stock levels, high consumer demand and high shipping costs have led to inflation in many of the world’s economies. US inflation rose by 5.4% in the twelve months to July 2021, or by 4.3% if energy and food goods prices are not taken into account. However, the shift by the US Central Bank (also known as the FED) to focusing on average inflation means that although inflation exceeds the target of 2%, interest rate hikes are unlikely to be imminent. This is because government debt is massive, unemployment remains high, and scepticism remains regarding whether high inflation is a long-term trend or a temporary jump due to the nature of the pandemic, and consequently, the speed of economic recovery.

Contact online
BACK TO: Tanker shipping - profitability still a way off for loss-making tankers as pandemic drags on NEXT: Dry bulk - profits surge to multi-year highs as pandemic related demand and disruptions linger