Despite diverging pandemic paths in the world, global growth is forecast to reach 6% this year, according to the International Monetary Fund, following a 3.3% contraction last year. There are, however, still plenty of downside risks, especially as parts of the world are facing their worst coronavirus outbreaks to date and the prospect of a large part of the global population being vaccinated is still a long way off.

Even in countries that seem to have the worst of the pandemic behind them, growth this year is expected to vary. China and the US are expected to forge ahead, solidifying their position as the top two global economies, whereas the EU, Japan and the UK are lagging behind and need at least another year to return to pre-pandemic levels. 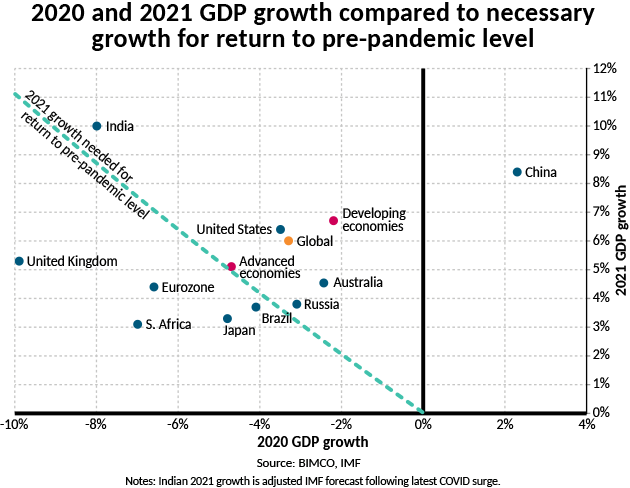 With the global recovery picking up steam as vaccines are rolled out widely across the developed world, manufacturing activity is picking up, especially in developed economies where it dropped last year, unlike in China where it drove the recovery.

Despite April seeing the highest number of confirmed COVID-19 cases so far, the global manufacturing PMI reached its highest level since April 2010, at 55.8, the tenth month of expansion. The higher PMI is a result of not only rising ouput and new orders – though both of these have been strong (55.7 and 56.7, respectively) – but also longer supplier delivery times and higher input prices as manufacturers struggle to secure all the raw materials they need to keep up with their orderbooks.

The strength of consumer demand for manufactured goods and the unpredictability of the past year has left supply chains under more pressure now than at any other point in this pandemic, as securing the needed inputs has become an increasing challenge in many industries, with delays and temporary factory closures still being announced worldwide.

Headline figures for Chinese GDP growth were very strong in the first quarter, up 18.3% from Q1 2020. In the first four months of the year industrial production registered a 20.3% increase compared with the same period in 2020, and retail sales were up 29.6%. Even when adjusting for the large drops that came at the start of last year, industrial production in April was up 14.1% from the same month in 2019. Even more impressively, after being a drag on growth in 2020, consumer spending on retail goods, which fell in 2020, was 7.8% higher in the first four months of 2020 than in the same period of 2019. Compared with Q1 2019, the Chinese economy was 10.3% bigger in Q1 2021.

Despite the high growth rates, Q1 growth was the slowest quarter-on-previous-quarter growth since the large drop in Q1 2020. Compared with Q4, the Chinese economy grew by just 0.6%, down from the 3.2% growth registered in Q4 compared with Q3 2020. Over the full year, the IMF expects the Chinese economy to grow by 8.4%. If correct, this will mean economic growth for 2020 and 2021 will be around 1.5 percentage points lower than if the economy had grown by 6% in both years.

Another economy that has returned to its pre-pandemic level is South Korea, whose Q1 2021 economy was up by 1.8% compared with Q1 2020. Strong demand has pushed up exports to the rest of the world – especially of high-value goods – because of government stimulus elsewhere. Total South Korean exports were up by 18.8% in the first four months of 2021 compared to 2020.

Just over half of the growth in South Korean exports came from those to China and the US, which were up by 26.8% and 25.1% respectively. The best performing commodity so far this year has been electronic machinery, which now accounts for 29.4% of total South Korean exports, when measured by value, after growing by 19.2% in the first four months of 2021.

Japan has also seen stronger exports driven by Chinese demand. Total exports in the first four months of this year were up by 13.1% compared with the start of 2020. Exports to China alone were up by 27.7%, whereas exports to the rest of the world were up by 9.8%.

With rising cases and several cities under emergency measures, the fast-approaching Olympics will not deliver the economic boost that had been expected, because foreign fans are not allowed to attend, and social distancing measures for locals means that the usual Olympic boost to consumption will not happen.

At the other end of the COVID-19 spectrum, for India Q2 2021 will be the worst quarter yet, with the economic recovery from last year’s lockdowns now put on hold. However, restrictions this year are more local and targeted and therefore unlikely to cause the economy to slide as deeply as in Q2 last year, despite a far worse health situation.

The effect of the government stimulus measures on the US economy is clear, with the cash injection sending retail sales to a record high in March of USD 565.1 billion, beating the previous record set in December 2020. In April retail they fell slightly from March, to USD 550.7 billion, leaving total retail sales so far this up by 23% compared to the first four months of 2020. Housing starts (the number of new residential construction projects), which is a leading indicator of US container imports also jumped, with 140,900 new units in April, down slightly from the 141,400 in March which was the highest monthly level since September 2006. 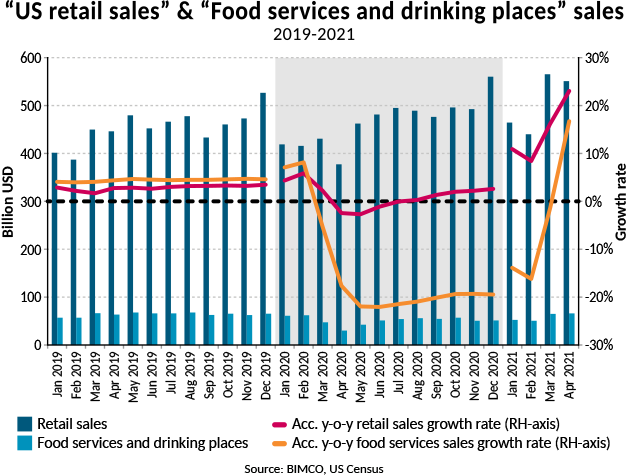 As well as retail sales, the fast vaccination rollout and relaxing of restrictions has led to strong growth in the service sector. Spending on food services and drinking places rose to its highest level since August 2019 reaching USD 66 billion in April, beating the pre-pandemic months of January and February last year.

Air travel is also recovering, driven by domestic flights, with an average of 1.5 million passengers per day in the first half of May. American Airlines expects that its domestic seat capacity this summer will be around 90% of 2019 levels. International travel, on the other hand, has a much longer path to recovery, with travel restrictions – both in the US and across the rest of the world –being tightened in response to virus mutations.

Already in the first quarter of the year the economy was above pre-pandemic level with the first estimate showing growth of 0.4% compared with Q1 2020. However, with non-defence federal spending up by 10.4% in Q1, the looming question that has yet to be answered is what happens when state support runs out and there are still millions more unemployed than before the crisis?

The Biden administration has already proposed another USD 4.1 trillion in spending, though as opposed to previous stimulus rounds when the money was spent almost immediately, this will be split over the next decade, with less of a focus on getting citizens through the immediate crisis, but rather on infrastructure and education.

Supply chain issues are holding up the recovery for some of the major industries in Europe, which have seen a shortage of certain inputs and delays creating problems for manufacturers. One of the clearest examples of this is the automotive industry, with factories across the continent being temporarily shut owing to a lack of critical components and parts.

Motor vehicle manufacturing is particularly suffering in Germany, where this bottleneck has combined with a new wave of infections and restrictions. The first four months of 2021, compared with the same period of 2020, was up by an impressive 21.7% year-on-year. But compared with Q1 2019, production was down by 25.0%, with 418,360 fewer passenger cars produced. 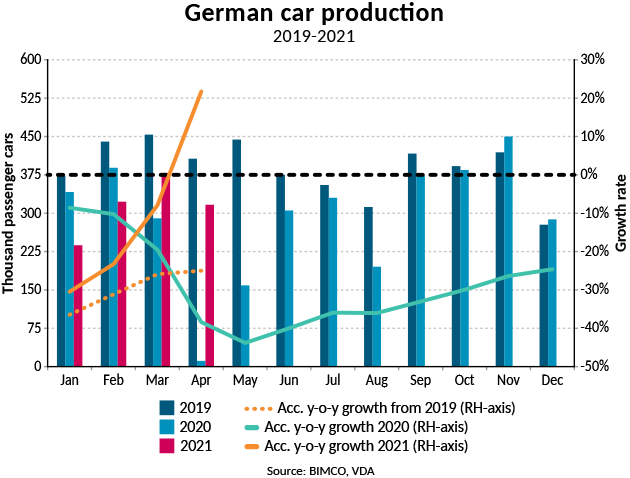 Though the pandemic and recent supply chain issues have undoubtedly hurt German auto manufacturing, it was already on a downward trend. The US-China trade war – as well as new emissions regulations – contributed to car production in Germany peaking in 2016, with 5.8m cars produced. By 2019, this number had declined to 4.7m, before a steep drop to 3.5m cars in 2020.

The rest of the European Union is experiencing similar input-related disruption to manufacturing activity, with demand higher than production capacity. This disruption is particularly bad news for the EU's economy, as unlike other places where vaccine programmes are more advanced and services are increasingly opening up, continued lockdowns and restrictions are delaying the economic recovery in the Eurozone.

In the first quarter of 2021, the Eurozone’s GDP was down by 1.8% from Q1 2020. This was the second consecutive period with a quarter-on-quarter contraction, with the economy suffering a double-dip recession as a third wave of infections and lockdowns hit economic activity. However, with case numbers in most European countries now easing as vaccines become more widely available, the IMF expects that the Eurozone economy will end 2021 up by 4.4%, still leaving it 2.5% smaller compared with 2019 levels.

With the pandemic still raging, the number of daily new confirmed cases and deaths rising, and a geographically very uneven vaccine distribution, the post pandemic world is still some way off. However, despite all the risks the current situation still presents, the richest economies in the world are lifting restrictions, which – if they avoid new surges – will boost their economies. 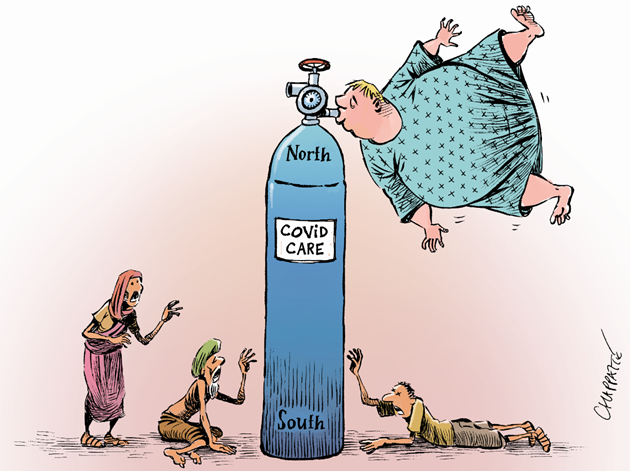 Although services are picking up in countries where the vaccine roll-out is going well, goods will continue to drive global economic growth. The World Trade Organization forecasts that merchandise trade will grow by 8.0% in 2021 (after a 5.3% drop in 2020), with container and dry bulk shipping both seeing record high volumes so far this year. As long as travel restrictions and social distancing measures remain in place, however, global oil demand, and thereby demand for tanker shipping, will remain far from record levels.

The delays in supply chains that are affecting production around the world will also continue to cause problems for many months to come, as manufacturers scramble to piece together the components needed for their production lines. While a knee-jerk reaction for some will be to look at options for relocating production and increasing protectionism, the solution to a global problem will have to happen on a global scale. Protectionist measures will only complicate the issue.

As The Economist puts it: “Globalisation is the work of decades. Do not let it run aground”.