Total orders of dry bulk, tanker and container ships in the first five months of the year have jumped 119.7% compared with the same period in 2020, primarily driven by record high container ship contracting, as investors in this segment find themselves flush with cash.

So far 43.6m DWT of orders have been placed at shipyards, towering above the 19.8m DWT at the start of 2020, when order levels were lower due to uncertainty at the start of the pandemic. In all of 2020, 49m DWT was ordered, a level which is only 5.5m DWT above the level reached in just the first five months of 2021. 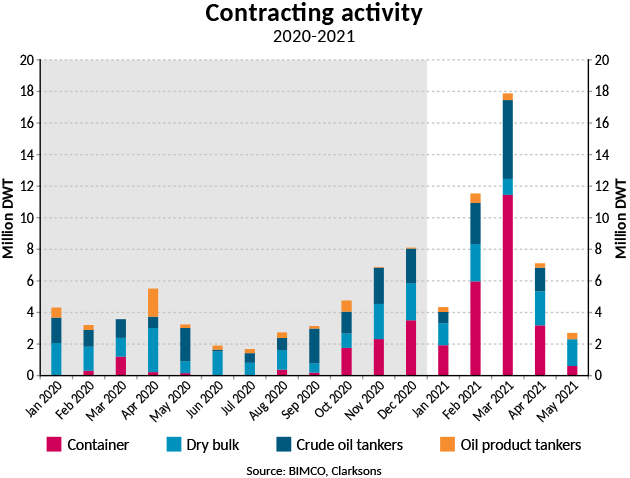 Although not matching the staggering growth in container ship contracting, demand for new crude oil tankers has been strong, up 47.4% from the first five months in 2020, despite the freight market being much more profitable than currently. Oil product tankers on the other hand have seen a fall in contracting, whereas dry bulk contracting, despite the strong freight and S&P markets, is only slightly above last year’s level.

“The vast amount of money pouring into container shipping is finding its way into the shipyards, with the current tightness in the supply of ships incentivising some owners to expand their fleets. Although also making good money in the current market, dry bulk owners have been more reluctant to order new tonnage, with the second-hand market proving more popular,” says BIMCO’s Chief Shipping Analyst, Peter Sand.

“The tanker market is split in two. We are seeing a rise in contracting for crude oil tankers, as owners who filled their coffers during the height of the market last year are betting on a better market when the ships are delivered, whereas oil product tankers are proving less popular,” Sand says.

Money from the container freight and charter markets pouring into shipyards

It has been a truly record-breaking start to the year for containership contracting, with 2.2m TEU being ordered. This is more than 12 times higher than the 184,254 TEU ordered in the first five months of 2020 and more than 60% higher than the previous record dating back to the start of 2005.

“The biggest of the ULCS are proving less popular with carriers seeing the 15-16,000 TEU ships as a better option. This is because they still offer solid savings from economies of scale while not putting the same limits on flexibility as the 20,000+ TEU ships have in terms of trading patterns,” says Sand.

The three big shipbuilding nations are the only ones to have cashed in on the high containership contracting, with China winning the most deals (145), South Korea in second place (63) and Japan rounding out the trio (21). 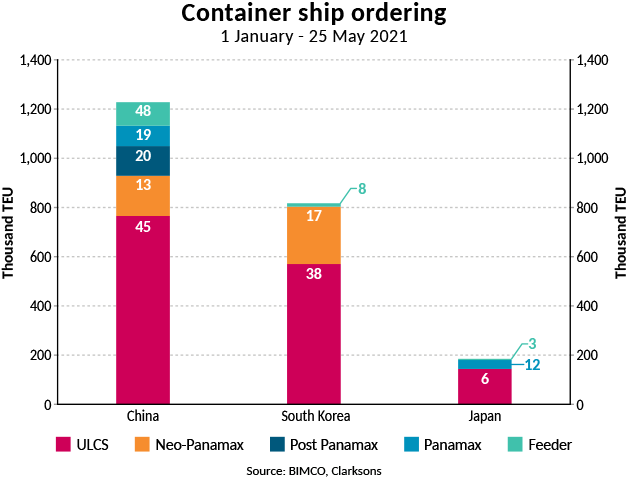 The vast majority of the tonnage ordered so far this year will be delivered in 2023, which according to BIMCO estimates will see 1.5m TEU delivered. This would make it the busiest year for container ship deliveries since 2015.

Despite the much poorer market conditions in the first five months of this year compared with the start of 2020, ordering of VLCCs has risen 125% to a total of 8.2m DWT, up from 12 ships to 27. After just five months, VLCC ordering is now only 4 ships (1.1m DWT) shy of total ordering in 2020. The rise in VLCC contracting has been enough to make up for the fall in contracting of smaller crude oil tankers. Ordering of Aframax and Suezmax tankers has fallen 44.5% to 1.5m DWT between January and May 2021 compared to 2020.

The bigger ships are also the most popular in the dry bulk market. Contracting for Panamax and Capesize ships has risen by 40.9%, but the 56,5% fall in new orders for Handysize and Handymax ships means total dry bulk contracting activity has risen by only 3.6% to 8.6m DWT.

In contrast, in the oil product tanker market, the bigger Long-Range ships have proven less popular than MR tankers of which 28 have been ordered totalling 1.4m DWT, all with a capacity of 40-50,000 DWT. For LR2 tankers, only five orders have been placed so far this year, and none for LR1 tankers.

On 1 and 2 June BIMCO will publish its quarterly Shipping Market Overview and Outlook covering the dry bulk, container and tanker markets as well as global macroeconomics. These, as well as all other BIMCO market analysis can be found here.