No V-shaped recovery in sight after the large-scale shutdown of economic activity and the virus posing a risk to globalisation.

The global economy and world trade are being battered by the widespread and comprehensive measures to limit the spread of Covid-19. Even though some countries have started easing their lockdown measures – such as in China – there has been no swift uptick in economic activity, leaving no hope of a swift global economic recovery.

On 8 April, the World Trade Organization set out two scenarios and both predict trade dropping in every region and across all sectors. In its most optimistic view, global trade will fall by 13% in 2020, whereas its pessimistic outlook sees trade falling by 32% from 2019 levels, with a recovery in 2021 that will not return volumes to pre-pandemic levels. BIMCO believes the actual drop will be somewhere between these two figures, depending on how long it takes for the pandemic to be brought under control, and how governments around the world are able to coordinate and implement effective stimulus measures to get their economies back up and running. 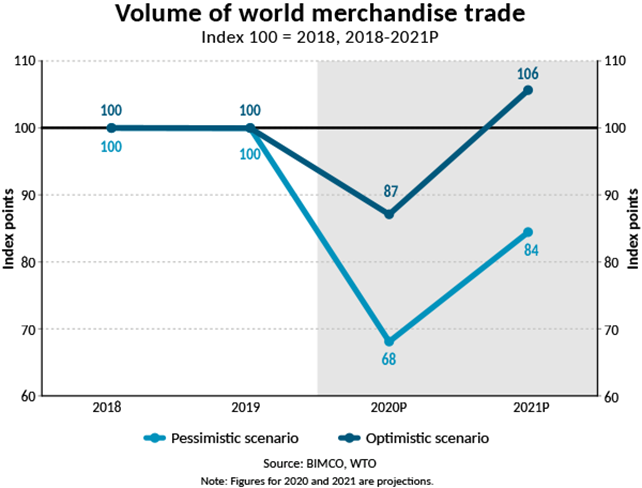 The International Monetary Fund (IMF) has turned its 2020 growth forecast on its head, from + 3.3% growth before the outbreak, to a 3% contraction, although this prediction remains shrouded in uncertainty as the duration of the crisis and the speed at which nations can reverse lockdown measures remains unclear. This sudden and drastic contraction far exceeds that of the 2008 financial crisis; the Great Depression of the 1930s, unfortunately, looks like a closer comparison.

In its April World Economic Outlook, the IMF forecasts the economy will normalise in 2021 with growth of 5.8%, bringing the global economy to an index level of 102.6 from 2019 levels. This forecast assumes that most containment efforts will be removed over the course of the second half of 2020.

The crisis, which took hold in Europe in March, has seen countries responding in different ways, although most have been on a scale ranging from a full lockdown and curfews to more restrained social distancing measures. Common to all countries, however, is that their economies have taken a massive hit. 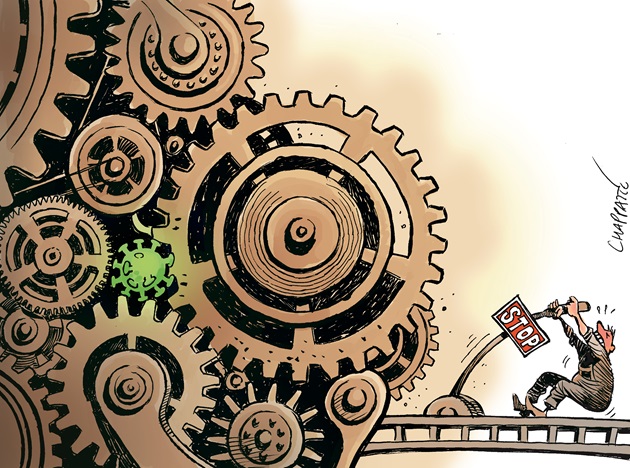 The largest economies in Europe are among those worst affected. Germany, the UK, France and Italy have all posted negative Q1 GDP growth: -2.2%, -2.0%, -5.8% and -4.7%, respectively. The European Union as a whole saw its economy shrink by 3.5% in the first quarter of 2020 compared with Q4 2019, although when looking year-on-year, the economy was 0.2% larger than in Q1 2019. The impact on shipping will be lower demand across all sectors.

These Q1 GDP contractions are merely a warning of the damage the virus is likely to cause in the second quarter of the year. Most countries only implemented containment measures in March, and the continued confinement in April – as well as the slow and winding road out of the situation – means the economic damage will be greater in the second quarter than in the first, inevitably leading to slower growth. The IMF forecasts a 7.5% contraction in the eurozone’s economy for the full year. Even with a return to growth in 2021 of 4.7%, would still leave the economy significantly smaller than in 2019.

The service sector, which outperformed manufacturing last year, has been even harder hit by the global health crisis. The eurozone’s service Purchasing Managers Index (PMI) fell to its lowest reading on record in April at just 12 points (the threshold of 50 indicates no change from the previous month, with anything under 50 representing a contraction).

Manufacturing on the continent has also been dealt a heavy blow, with countries lining up to post record low readings of their manufacturing PMIs. The eurozone saw a massive contraction.  Its index fell from 44.5 to 33.4 in March, as factories closed and demand plummeted, with the new export orders sub-index falling to record lows. In the five biggest nations in Europe, the indexes fell to between 30.8 and 34.5 points. Despite government measures to avoid unemployment, manufacturers reported cutting staffing levels at the fastest rate since April 2009. 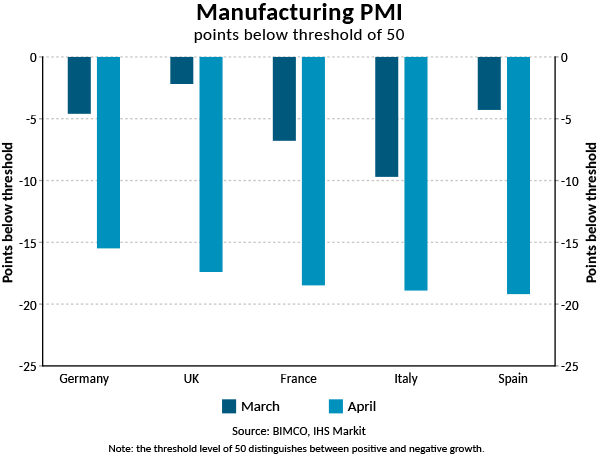 The virus has devastated the economy in the United States, with the first estimate showing GDP shrinking by 4.8% in the first quarter (quarter on quarter). Personal consumption expenditure fell by 7.6%, exports are down by 8.7% and imports by 15.3% (Source: Bureau of Economic Analysis). The outlook for the second quarter looks even worse.

Weekly unemployment rates sky-rocketed at the start of the crisis and, although new filings appear to have peaked when they reached 6.9 million in the week ending 28 March, new claims are still coming in by the million every week. The total hit 38.6 million after the first nine weeks of the crisis, with the unemployment rate rising to 14.7% in April from 4.4% in March.

Retail sales figures in March and April give a detailed indication of what the lockdown has meant for sales of consumer goods. Advance figures from the US Census Bureau show that sales in grocery stores rose 29.3% in March 2020 from March 2019, with April sales up 12% from the previous year. However, sales in other stores have plummeted: clothing sales were down 89.3% in April and sales in furniture and electronics stores were down by 66.5% and 64.8% respectively. These are important goods for the container shipping sector, and if they are not being bought in the US, they will not need transportation across the Pacific.

The outlook for sales picking up remains poor; lockdown measures continued into May and the increases in unemployment and the looming recession offer little hope that consumers will boost their spending once back at the shopping malls.

Trade data for March shows that the US trade deficit widened to USD 44.4 billion, up 11.6% from February, with exports declining faster than imports (-9.6% and -6.2%, respectively). Declines were posted in services, with tourism in particular coming under strain, as well as in the trade of goods, as demand and supply chain disruptions made themselves felt.

In China, where the virus outbreak led to a much earlier shutdown than in the rest of the world, the easing of the measures has provided some insight into how the rest of the world could emerge from this crisis. China’s economy shrank by 6.8% in the first quarter, with it being harder hit than other countries because the containment efforts started earlier. The outlook for a strong recovery remains muted, as the after- effects of the lockdown in China and lower demand from the rest of the world take hold.

The Chinese manufacturing PMI posted 50.1 in March, indicating only a tiny positive change from February and by no means a full recovery. Given the 40.3 contraction in February, there is a long way to go before activity returns to pre-Covid-19 levels.

Despite a general return to work in Chinese factories, manufacturing activity contracted in April, albeit slowly, with an index reading of 49.4. This contraction is a result of the lower demand within China and the rest of the world, where goods delayed by the shutdown in China are arriving at their destination to find no demand and an increasing lack of storage space.

A testament to this is the new export orders index out of China that in April stood at only 33.5 points. This is above the 28.7 it posted in February, but with March also posting a reading below 50 (46.4), the absolute volumes of exports remain much lower than before the crisis, with no hope of a rapid V-shaped recovery. It will take many consecutive months of PMI readings above 50 for manufacturing activity to return to pre-Covid-19 levels. 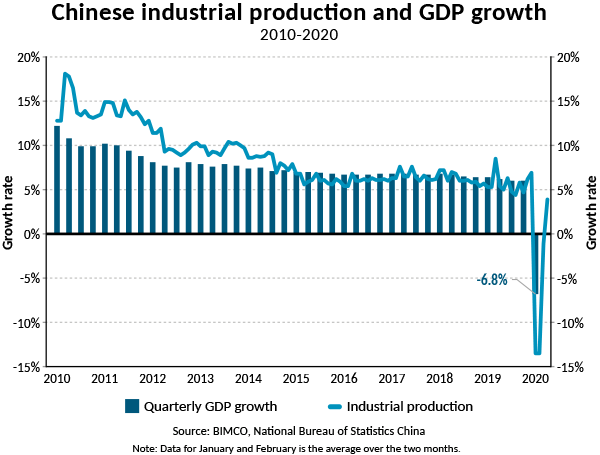 Industrial production in China recovered in April, posting growth of 3.9% from April 2019. This marked the first month in which production (measured in value) was higher this year than in the corresponding month last year. Comparing the first four months of the year though, industrial production is down by 4.9% from last year. Even a country such as South Korea, which has for the most part avoided strict lockdowns and confinement, has seen its economy take a battering, shrinking 1.4% in the first quarter, with a drop in consumer demand and exports being the primary causes. Japan has also been hit by these two factors which, along with -3.4% growth in Q1, caused it to enter a technical recession, following a 1.8% quarter-on-quarter contraction in Q4 2019.

BIMCO does not expect a V-shaped recovery of shipping demand and economic activity in general. Instead – after an alarmingly steep drop – the economy faces a long and uncertain climb back to growth. This is due to the following reasons:

The speed and scale of the slowdown in economic activity in nations around the world are unprecedented, and, while the threat from the virus remains, the duration of this crisis and the speed at which the nations will emerge from the slowdown are highly uncertain. The massive stimulus packages materialising around the world – including wage compensation for workers otherwise at risk of unemployment, cheques from the government and deferred tax payments – all aim to ensure that as much of the economy as possible is still standing once the health crisis eases. Even so, an economic crisis will follow.

The post-pandemic world will be faced with, among other things, lower consumer spending power, lower consumer confidence and lower overall demand, both domestically and internationally. As we have seen in China, a recovery in its domestic market is not enough to shore-up demand – it also needs a strong global economy. The slow re-opening of economies around the world also increases the risk of a new wave of infections and a return to more stringent lockdown measures, all of which will weigh heavily on government, business and consumer decisions until the crisis has passed.

Global oil demand is massively impacted and lower demand will be felt by shipping, despite a short-term boost caused by the oil price war in April.

A coordinated response is needed to ensure as smooth a recovery of globalisation and the global economy as possible. Countries must avoid turning towards protectionism. On this front, worrying signs are emerging. In particular, the trade war between the US and China – which had been experiencing a truce since the signing of the “Phase One” agreement in January – risks flaring back up, as the US threatens more tariffs on imports from China in a response to its handling of the Covid-19 outbreak. It goes without saying, this will only hamper both economies’ recoveries, at a time when they both need plenty of help rather than further stifling.

However, increased tariffs are not the only threat to global trade. The virus has opened many people’s eyes to the vulnerability of international supply chains and their reliance on manufacturing plants on the other side of the world. This is the case for governments – many of which experienced shortages of critical equipment usually imported from abroad – as well as businesses. The exposure of these vulnerabilities will no doubt lead to changes in supply chains, with some benefiting the shipping industry, while others will harm it.