Capesize remains submerged in the depths of despair

While the Capesize segment has been massively impacted by the coronavirus, the smaller dry bulk segments are starting to recover towards profitable territory, partly on the back of seasonally higher grain exports from South America.

While the Capesize segment has been massively impacted by the coronavirus, the smaller dry bulk segments are starting to recover towards profitable territory, partly on the back of seasonally higher grain exports from South America. Nonetheless, as the coronavirus continues to spread, the risks are skewed towards the downside.

Capesize remains extremely unprofitable, but what about the rest?

The Baltic Exchange Capesize index drew headlines lately, as it, for the first time ever, went into negative territory. The index is still in negative territory, currently at -372 index points, due to the seasonality, IMO2020 and the outbreak of the novel coronavirus. When looking the at Capesize earnings, the same picture of unprofitability becomes abundantly clear. On 6 March, average Capesize earnings for a non-scrubber fitted ship sits at USD 2,542 per day, deep in loss-making territory.

Yet, as the Capesize segment has remained shackled in the doldrums, the smaller dry bulk segments Panamax, Supramax and Handysize has started climbing away from the loss-making freight rates. 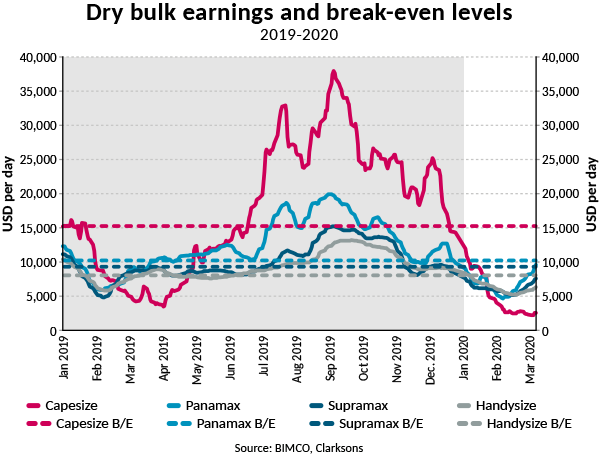 Argentina kicks off the year on a strong note

The first quarter of the year typically marks a slow one for the dry bulk market, partly due to the lunar new year celebrations in China and seasonally low agricultural export volumes from South America.

Yet, an unusually strong start to the Argentinian season has partly prompted a pickup in dry bulk demand and somewhat insulated the smaller dry bulk segments from the effect of the coronavirus.

The Argentinian marketing year for wheat runs from December to November, where the largest amounts are shipped off during the early months, yet the current season has started out on an extraordinarily strong note.

In January, Argentina exported a total of 6.2 million tonnes of grains (defined as soya beans, coarse grain and wheat) where wheat accounted for 3.8m tonnes and 2.4 m tonnes came in the shape of coarse grains. This uptick in exports marks a 34% increase in exports compared to January 2019. 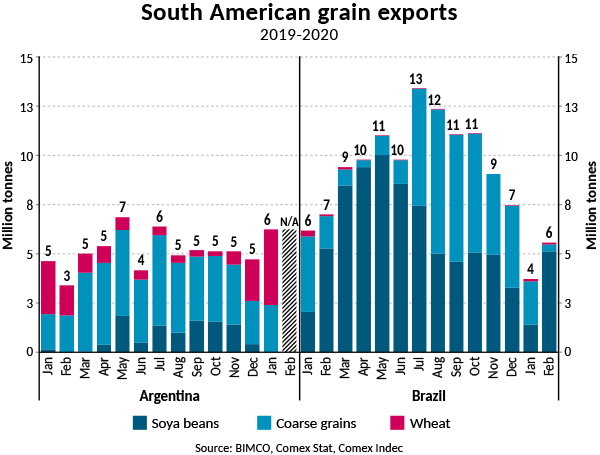 For the present wheat marketing year 2019/2020, Argentina is projected to export 13m tonnes of wheat and 37m tonnes of coarse grains, respectively up 7% and down 7% compared to the previous year. (source: USDA). The higher wheat exports will not offset the lower coarse grain exports, which are projected to decline by 2.6m tonnes.

Brazil claimed the crown from the United States – which has held the top spot for over 20 years – as the largest seaborne agricultural exporter in 2019. However, Brazil has kicked off the new year on a slow note with low export volumes of grains. In February, 5m tonnes of soya beans were exported from Brazil, of which more than two thirds went directly to China. Accumulated exports for the two months of 2020 are down 11% compared to the same period last year.

Although the Brazilian exports of soya beans have remained slow, it is projected that 2020 will mark yet another strong export season for Brazilian soya beans. USDA projects that Brazil will export 77m tonnes of soya beans in the 2019/2020 soya bean marketing year, adjusted to October-September, an extra 2.4m tonnes over the estimated 75m tonnes exported in the previous marketing year.

However, although Brazilian soya bean exports are projected to remain strong, there are several variables which could interfere with these projections.

First off, the African swine fewer outbreak in China in August 2018 led to the widespread culling of pigs, structurally decreasing the demand for soya beans used for feedstock.

Secondly, China has stipulated, over a two-year period, to purchase an additional USD 32 billion worth of agricultural goods in the US-China Phase One trade agreement, which could bring about a boost of US soya bean exports at the expense of Brazilian exports. Supposedly, the goods will be purchased in accordance with prevailing market conditions, which raises questions about whether these purchases ever will see the light of day.

Lastly, the coronavirus, which has sent shockwaves through the global economy and shipping markets, could dramatically dampen total dry bulk demand growth if it continues to spread globally.

While seasonally strong grain exports could provide for a temporary lift in freight rates, it is ever worth addressing the elephant in the room: structural overcapacity.

The Panamax, Supramax and Handysize fleet grew by a challenging 4.5% through 2019, and with 25m DWT on order right now it seems unlikely that the fleet will return to a strong balance between supply and demand anytime in the near future. 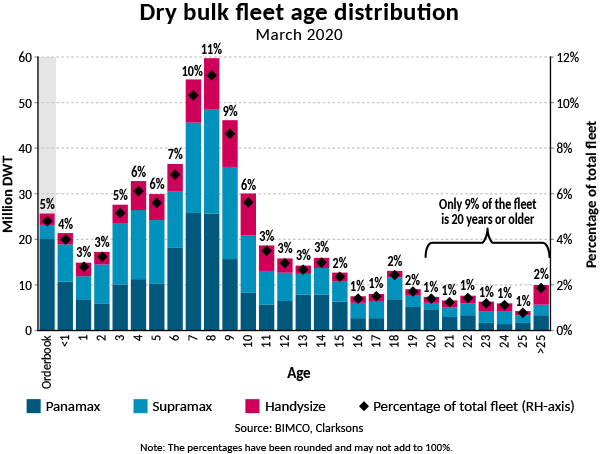 The coronavirus is a massive uncertainty factor, which will limit world economic growth through 2020. While China just now is getting back on its feet, it seems likely the worst is yet to come for the rest of the world.

BIMCO has modelled two coronavirus scenarios and reality has unfolded somewhat like our Scenario 2. In this scenario, focusing on China only, economic activity will start to pick up through mid-March and business activity normalise to baseline by April-May. As China recovers, dry bulk freight rates follow suit. Meanwhile conditions outside China have clearly soured in the first 10 days of March. That development is putting a lid on the extent and pace of the overall dry bulk market recovery.

BIMCO had already expected a challenging market for the dry bulk market in 2020. The high fleet growth will offset any potential demand growth and, at the very least, the IMO 2020 regulation will adversely impact dry bulk profitability through the first half of the year. The coronavirus has simply worsened the negative market outlook. Some demand has permanently been destroyed by the economic impact of the virus, and with market sentiment taking a turn for the worse, it seems likely that the dry bulk shipping industry will struggle to be on the profitability side for the coming year.