Low demand growth will continue into 2020, with carriers struggling to increase freight rates enough to cover the additional costs of the IMO 2020 sulphur cap compliance. Fleet growth is lower then last year, but still too high compared to demand growth.

In January, unaffected by the coronavirus (COVID-19) outbreak, freight rates rose, as per their usual seasonality, with rates traditionall rising in January from December.The hike this year was not enough to cover the additional costs of the IMO 2020 sulphur cap, with the market offering little support to carriers attempting to pass these on fully.

What should really be made of these increases? If we compare the average January 2020 with average readings of the indices over the past six years, the SCFI is 91.3 points (10.1%) higher and the CCFI 55.8 points (6.4%) higher. Both indices were higher in January 2015. 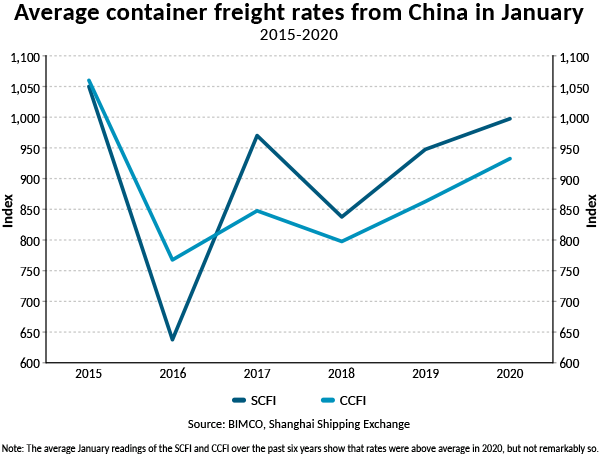 Comparing the January 2020 average with the January averages of the past six years of China and Europe paints a similar picture. The freight rates are above the six-year average – but not remarkably so – and not enough to cover the additional fuel costs from IMO 2020, this adds further pressure to carriers’ bottom lines.

The Bunker Adjustment Factors (BAFs) have been widely criticised for not being transparent or for being too complex to understand, leading to carriers having trouble implementing them. Those that have succeeded may have done so by lowering the underlying freight cost, such that the total price shippers’ pay has not changed much.

The strong freight rates come from the seasonality linked to volumes out of China being frontloaded ahead of the widespread factory closures for the Chinese Lunar New Year holiday. Volumes tend to fall during the holiday period, before ramping up again once the holiday ends.

This year will be different. Following the outbreak of the coronavirus in China, manufacturers have been much slower returning to capacity after the holiday. Many have stayed closed for weeks past their planned reopening date, and the return of workers has been delayed by widespread closures of inter-city transportation. As exports fall, carriers have been blanking sailings to reduce the capacity on routes out of China, despite the demand for goods being – as yet – unaffected by the virus, as it is driven by overseas buyers.

Disruption to Chinese manufacturing trades will also have consequences for neighbouring countries, as supply chains are deeply interconnected; manufacturers in one country often rely on those in another. This interconnectedness is the reason why intra-Asian container volumes are an early indicator of what will be exported on the long-distance trades out of Asia. Manufacturing in China, therefore, is not alone in facing problems; knock-on effects will be felt by manufacturing and exports throughout the region.

Extended blanked sailings were the first measures taken by global liner companies to ease the pressure of low demand. On the Far East to Europe trade, data from Alphaliner shows that capacity reductions are expected to total 700,000 TEU in the eight weeks following the Chinese Lunar New Year, more than double the reductions made over the same period in 2019 (340,000 TEU).

In the short term, if goods are not produced there are no alternatives and demand will fall. However, in the medium term, alternative producers will start to appear, just as we have seen as a result of the ongoing trade war between the US and China.

Growth in intra-Asian trade – the largest when measured by container numbers – disappointed in 2019, with full-year growth of just 0.6%, after rises of around 4% in both 2017 and 2018. The global slowdown and the trade war, were the primary drivers behind this contraction. The negative impact of the coronavirus on manufacturing in the region may well be enough to see volumes falling in 2020 compared with 2019.

BIMCO expects the container shipping fleet to grow by 2.5% in 2020, marking the first time in four years that deliveries will be below 1 million twenty-foot equivalent units (TEUs). On top of a fall in deliveries, demolitions are set to rise to 200,000 TEUs. 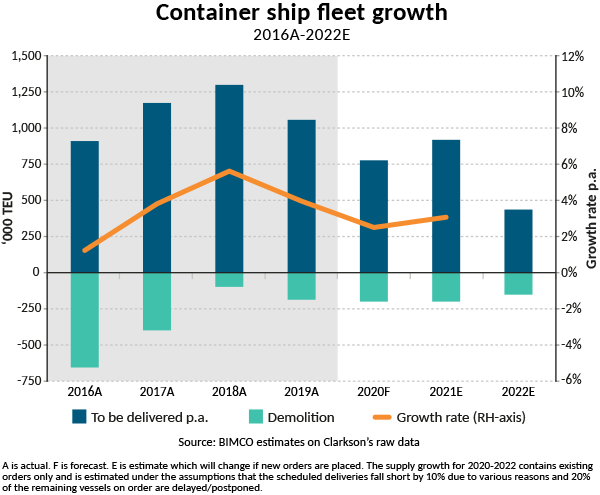 The unpopular middle-vessel sizes are not only experiencing an absence of orders but, for a long time, deliveries of these ships have not been enough to counteract demolition, with the Panamax fleet (3,000- 7,999 TEUs) shrinking every year since 2015. At the start of 2016, the Panamax fleet had a capacity of 3.6 million TEUs; by the end of 2019, this number had dropped to three million.

The expansion of the Panama Canal in 2016, allowing larger container ships through, and continued growth in the larger ship sizes, has squeezed the market for Panamax vessels, which now find themselves stuck in the middle. They are not large enough to reap the benefits of economies of scale – being forced out of more secondary trades due to cascading of vessels from the largest routes – and are too big for the traditional feeder routes. Currently employed worldwide, they are most common in Central America, West Africa and the Far East.

Feeder ships (100 – 2,999 TEUs), on the other hand, remain popular. The continued expansion of ships on long-haul routes means they can call at fewer ports, while at the same time bringing more containers into a region, increasing the need for feeder lines around the major hubs. BIMCO believes the hub-and-spoke strategies deployed throughout the industry will continue to support demand growth for flexible feeders (size and gear).

Global container shipping demand growth slowed to 0.8% in 2019. The factors behind this contraction remain the same:

As “Phase One” of the agreement’s primary focus is on goods from the US to China, the trade war will continue to hurt the more important eastbound transpacific trade. In 2019, inbound laden container imports to the US West Coast fell 5%, the first decline since 2011. BIMCO does not expect “Phase Two” of a deal to be signed before the US election in November. That paints a bleak outlook for this trade in 2020, even before the effects of the coronavirus outbreak are taken into account.

Blanked sailings are common around the Chinese Lunar New Year, but this capacity is usually returned shortly after the holiday ends. However, because of the prolonged factory shutdowns in China to limit the spread of the coronavirus, carriers have blanked more sailings. This has been done to support freight rates by limiting capacity as demand for transportation has fallen.

A prolonged downturn in Chinese manufacturing may result in a boost in exports once the virus is contained and manufacturing is back at its usual capacity. If demand remains unaffected, container shipping may receive a boost although, overall, this is unlikely to make up for lost volumes earlier in the year.

The fundamental balance of the container shipping market will once again deteriorate in 2020. Although fleet growth has fallen, it still exceeds the expected growth in demand. This comes at a time when, even during the seasonally strong pre-Lunar New Year period, carriers had difficulty passing on the extra fuel costs – a situation that, given the lower demand, has continued to worsen.