Join Peter Sand as he provides his latest dry bulk outlook at the INTERCEM Shipping Forum in Málaga, Spain on 21 January 2020.

The Chief Shipping Analyst is also scheduled to speak at the Annual European Oil Storage Conference, hosted by S&P Global Platts, in Amsterdam, Netherlands on 22 January 2020.

Peter Sand will engage participants with his outlook on the dry bulk market at the INTERCEM Shipping Forum, a premier venue for anything related to the cement industry. Sand will join in on an IMO2020 panel discussion in which he will present BIMCO’s outlook on the dry bulk market and the implications of the IMO2020 Sulphur Cap. Also contributing to the discussion, will be Michel Ardohain, Associate Professional Officer at the IMO, Mr Simon Cox, Senior Partner at Howe Robinson Partners and Alvaro Bonelo Martínez, Managing director at Cemco Cement Trading S.L.

BIMCO’s Chief Shipping Analyst is also present at the 13th Annual European Oil Storage, hosted by S&P Global Platts, in Amsterdam, a conference that dives into all subjects related to the oil storage market. Peter Sand will take the stage on 22 January 2020 and provide an overview of the oil tanker market and how IMO2020 impacts the shipping market and oil storages. The conference will feature other prominent industry speakers, including Bassam Fattouh, Director of Oxford Institute for Energy Studies, Hari Dattatreya, Global Oil Director at Vopak and Chris Midgley, Head of Analytics at S&P Global Platts.

The IMO2020 Sulphur Cap marks a huge environmental leap forward for the shipping industry. However, the regulatory framework will certainly impact the commercial shipping markets, which, for many owners, will entail higher fuel costs. The regulation has cast massive uncertainty over the markets, but also positively affected market sentiment in some segments with hopes of increased scrapping activity and heightened demand once the regulation sets into motion.

BIMCO has underlined that the added costs of IMO2020 can only be passed on to the shippers if the underlying freight markets are fundamentally strong. Throughout 2019, BIMCO has seen a deterioration in market balances across the three commercial markets with relatively high deliveries and comparatively low scrapping activity. Nonetheless, some markets are faring better than others and in particular, the tanker market. However, BIMCO reckons that the high tanker freight rates are due to a combination of a strong seasonal boost, a tightening of the US sanctions regime, geopolitical uncertainty in the Middle East and temporary supply outages with ships being utilized for floating storage or undergoing scrubber retrofitting. 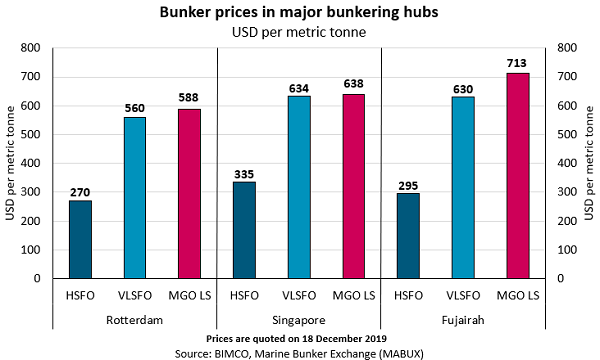 The fuel oil price spread between low sulphur fuels and HSFO fuels has been widening as 2020 has inched ever closer, which has been driven by declining HSFO prices. Up until the fourth quarter of 2019, Very Low Sulphur Fuel Oil (VLSFO) was largely unavailable but has gradually emerged and is now available at +100 ports around the world, priced at a slight discount to MGO LS in most ports. BIMCO has developed an exclusive bunker price tool for members, which highlights bunker price spreads in 32 ports.

In Singapore, the largest bunkering hub in the world, the VLSFO-HSFO spread is at USD 299 per metric tonne on 18 December 2019. Preliminary estimates indicate that low sulphur fuels accounted for 51% of total bunker sales in Singapore throughout November, a significant increase compared to previous months. The widening spread illustrates a massive uptick in additional costs that shipowners and operators must, in many cases, carry themselves. With more working capital tied up in bunker fuels, cash flow management is set to be of the utmost importance for shipowners and bunker suppliers in the coming year.

Contact online
BACK TO: News & Trends NEXT: Supply and demand trending off balance