Dry Bulk Shipping: Freight rates down from multi-year highs as the market fundamentals make themselves felt

The fundamental balance in the market has worsened in 2019 with supply growth outstripping demand, and BIMCO expects that this will continue into 2020.

After peaking in September, the fundamentals of the market have begun to drag on freight rates – although the rates remain above the average experienced so far this year, buoyed by a handful of positive developments during Q3.

Capesize ships are the only dry bulk ships to have seen average freight rates in the first 10 months of this year higher than those in the corresponding period of 2018 with average rates up USD 624 per day, pulled up by the peaks in earnings experienced towards the end of Q3. On the other hand, average earnings are down for all the smaller vessel sizes: -3.2% for Panamax, -12.7% for Supramax and -17.1% for Handysize. 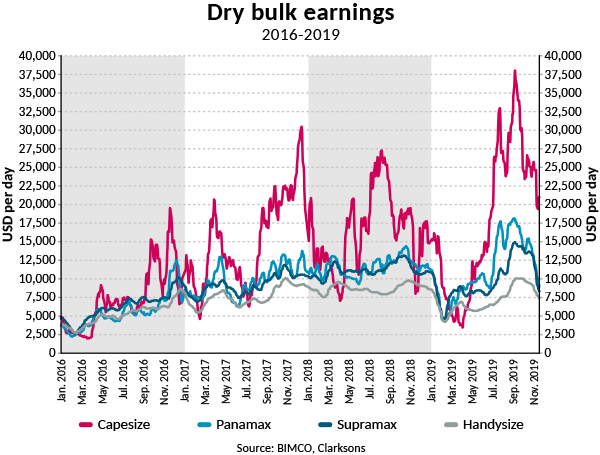 Although Brazilian iron ore exports have suffered after the Vale tailings dam collapse in January, firmer exports in Q3 helped push Capesize rates to six-year highs, despite total Brazilian exports still being 12.3% lower in the first 10 months of 2019 compared with the same period of 2018.

For only the third time this year, monthly exports exceeded 30m tonnes, with 31.2m tonnes exported in October. In 2018, this export level was reached in nine of the 12 months. Indications from Vale suggest that exports may face renewed pressure through to the end of the year, Although after falling to zero at the start of November, the number of spot cargoes being reported has increased.

Imports of iron ore to China have also fallen, down 1.6% in the first 10 months of the year. Nevertheless, imports in September were the third-highest ever, pulling year-on-year accumulated growth rates up from the -5% they had been hovering around throughout the year. 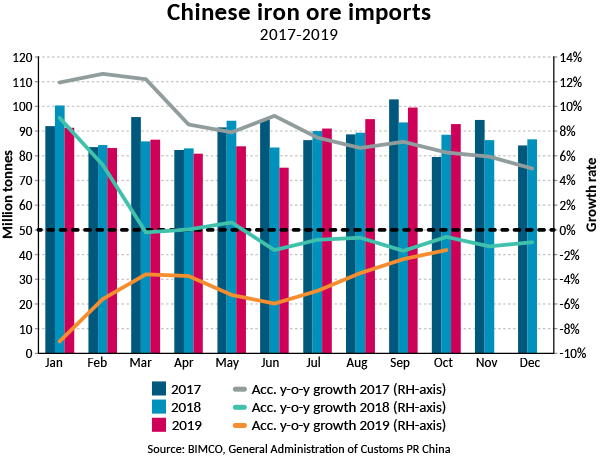 2018 was the first year in which Chinese iron ore imports fell, and BIMCO expects this trend to continue as China moves towards using scrap steel, rather than imported iron ore in steel production.

Despite all earnings coming down since their peak in September, they remain much higher than during the first half of the year when rates tumbled. On 1 November, Capesize earnings stood at USD 24,637 per day, Panamax at USD 12,142 per day, Supramax at USD 11,590 per day and Handysizes earning on average USD  8,398 per day. At these levels, all rates are above the average break-even costs, covering not only operating, but also financing costs.

Brazilian corn exports are up 123.8% in the first 10 months of the year, with volumes from Argentina up 48.7%. This brings total exports from the two countries to 60 million tonnes, or an additional 317 Panamax loads, compared with exports from the two countries in the same period of 2018. On the other hand, the US has seen falling corn exports, down 44.3% in the first nine months of the year. In volume terms, this means a loss of 234 Panamax loads – not enough to derail the positive effects of higher exports from Brazil and Argentina. These strong corn exports helped to boost Panamax and Supramax freight rates at a time when they were already being pulled up by the strong Capesize market.

Rates for these vessel sizes have since fallen, as US soya bean exports, usually strong in the last four months of the year have, like last year, disappointed in September and October. The US soya bean marketing year runs from September to August, and in the first nine weeks exports are down 3.8 million tonnes from the same period in the 2017/2018 marketing year-the last one unaffected by the trade war. Exports are however 1.2 million tonnes higher than they were in the 2018/2019 marketing year, but this is testament to very low exports in 2018/2019, rather than a good start to the current marketing year.

Despite rumoured breakthroughs in trade talks, BIMCO expects that exports in the main US soya bean season will continue to be lower than those in previous seasons unaffected by the trade war. This is not only because of these tensions, but also due to the massive culling of pigs in China in response to the African swine flu. This has led to 41% fewer pigs in China than at the same time last year, dramatically cutting the country’s demand for soya beans. Furthermore, Chinese buyers have continued purchasing Brazilian soya beans, which is unusual, at a time when they would usually be importing from the US. 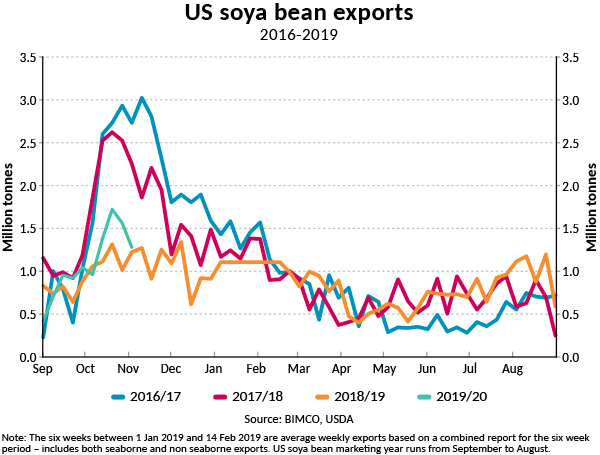 This development has come about because US soya beans are now more expensive than their Brazilian counterparts, even before taking additional tariffs into account, thanks to rumours that large purchases from China were just around the corner.

The changing seasonal export patterns have caused problems for ships that were in place and ready for the US season, only to find that Brazil was the place to be.

Dry bulk fleet growth in 2019 is already higher than it has been in any year since 2014. It is currently standing at 3.5%, and BIMCO expects it to rise to 4.1% by the end of the year. This is based on the expectation that a further6m deadweight tonnage (DWT) will be delivered betweenmid-November and the end of the year, adding to the 36m DWT already delivered, and 0.9m will be demolished. This would bump the total demolition up to 7 million DWT. 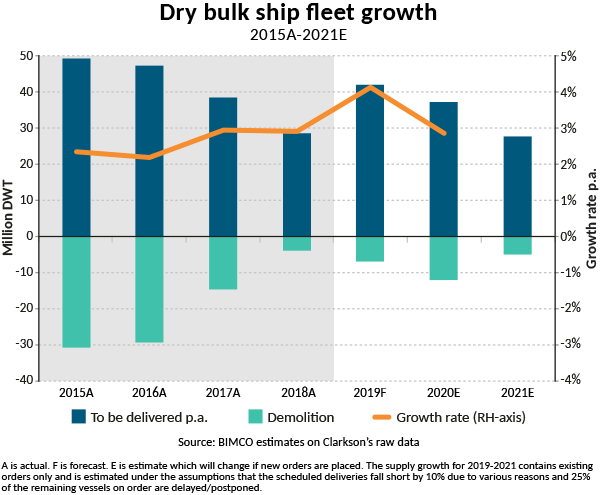 Ordering activity has been subdued this year, amounting to 19.9m DWT by mid-November. This is 47% lower than the 37.7m DWT ordered in the first 11 months of 2018, which saw orders for a total of 40.1m DWT. It is a very positive development, sowing the seeds for a better market balance.

While earnings have remained at healthy levels moving into Q4, this has little to do with the market fundamentals. Instead, it is a continuation from the high freight rates seen in Q3, where a positive demand shock saved them from the doldrums they had experienced in the first half of the year.

The swing factor remains Chinese coal imports, which have grown by 9.6% in the first 10 months of the year. While this growth is expected to continue into the last two months of the year, policy decisions in China could have a large impact. Imports were curbed at the end of last year, as a result of domestic policies aimed at reducing emissions. This meant Chinese coal imports fell from June through to December, with imports in December 2018 dropping to less than half of those in the same month in 2017.

The fundamental balance in the market has worsened in 2019 with supply growth outpacing that of demand. BIMCO expects that this will continue into 2020 and the fleet to grow by around 3%. This will do nothing to help shipowners pass on the additional costs of the looming IMO 2020 sulphur cap, which is set to add even more pressure to already struggling bottom lines.

It remains unclear whether the high freight rates in Q3 were due to delayed cargoes from Q1 appearing on the market, or the pushing forward of Q4 cargoes. BIMCO expects the former, but fears that if the latter is to blame, then freight rates will continue to fall in the last few months of 2019.

Contact online
BACK TO: Container Shipping: Pressure remains despite some of the trade war damage being offset by a reshuffling of manufacturing in Asia NEXT: Tanker shipping: sky-high freight rates have given way to a profitable winter market supported by the fast-approaching IMO 2020 Sulphur Cap