The oil market has recently been shaken up by geopolitical events, but volatility in the price difference between low and high sulphur fuel cannot be explained by that alone – the uncertainty is the chaos factor.

The uncertainty of the upcoming IMO 2020 Sulphur cap regulation (IMO2020) is having a big impact on the bunker market. Whereas, the price for Marine Gas Oil Low Sulphur (MGO LS) has largely remained stable, the price for High Sulphur Fuel oil (HSFO) has been become increasingly more volatile in recent months. The HSFO-MGO LS price spread has, in some ports, widened to levels exceeding the actual price for HSFO.

IMO2020 adding a disruptive interference in the market

The oil market has remained on edge in recent months with plenty of market volatility to go around. The bunker fuel oil market is normally directly correlated to the developments in the crude oil market, but recently, IMO2020 has added a seemingly disruptive interference with the pricing of bunker fuel on top of it.

As people in shipping are painfully aware, in less than two months, shipowners are no longer allowed to burn fuel oil with sulphur emissions above 0.5%, unless a scrubber is working on board. This presents a massive challenge for the industry, where the vast majority of ships are operating on 3.5% HSFO.

The implementation deadline has been well-known in the industry for several years, yet, uncertainty is increasingly characterising the market as 2020 creeps closer. Heightened bunker price volatility has become a new normal in the second half of 2019 with the HSFO price in Singapore plummeting 45% in less than a month. 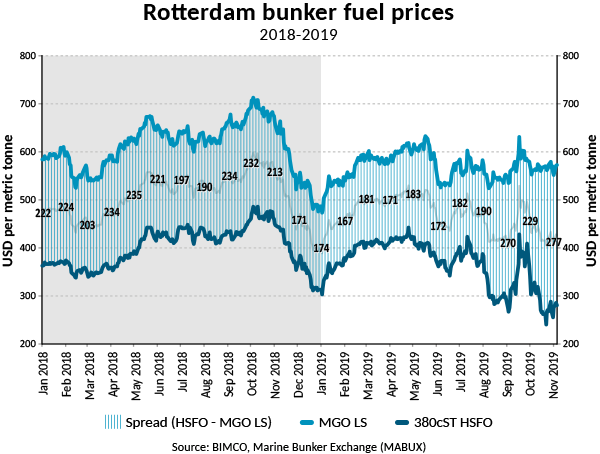 “The bunker price spread illustrates the tumultuous ride that the bunker market has endured in the last couple of months and similarly, the spread illuminates why the market is filled with uncertainty about the future. From 1 October to 1 November, the spread for HSFO-MGO LS in Rotterdam spread widened 21%, from USD 229 to USD 277 per metric tonne,” says BIMCO’s Chief Shipping Analyst, Peter Sand.

MGO LS is, as all other bunker fuels, exposed to underlying oil market shocks, but has exhibited less volatility and fluctuated around the same price range in 2019. Conversely, price volatility of HSFO has increased in recent months with significantly greater fluctuations in price.

BIMCO members can dive into the fluctuations further using the bunker pricing tool available on the BIMCO website at the market reports section. It shows the bunker fuel prices in 32 ports around the world, based on daily information supplied by MABUX. The service is available to BIMCO members only.

A quick review of the market can shed some light over recent developments. Seemingly, a lightning struck the HSFO market towards the end of June. Over the course of 14 days, the price for HSFO rose USD 132 per metric tonne from USD 370 to USD 502 in Singapore. A massive price change, considering the stability of the market in the preceding 6 months. In the weeks to follow, prices cooled off and dipped to a mere USD 330 per metric tonne, which was, at the time, the lowest point since 2017.

The HSFO price went on the recover and rose above its previous levels during August and early September. Then, on 14 September 2019, lightning struck the market again, although this time in the shape of a drone strike on the Saudi Arabian Abqaiq oil facilities. Brent crude spiked 20% initially with the bunker market following suit. The HSFO price in Singapore spiked to a whopping USD 590 per metric tonne on 17 September 2019. However, the peak was short lived and dipped back to lower levels, bottoming out at a new yearly low of USD 323 per metric tonne on 10 October 2019.

“Geopolitical events, such as the attack in Saudi Arabia, certainly impose shocks on the bunker oil market, but recent movements in the HSFO-MGO LS spread cannot solely be laid at the feet of geopolitics. Seemingly, the uncertainty of the IMO2020 regulation is disrupting the normal market conditions to a certain extent. Anecdotal evidence suggests that, in some ports, greater efforts have been made to store MGO LS on bunker barges, tightening the market for HSFO.” says Peter Sand.

Availability of fuels will vary greatly in between ports and greatly influence bunker prices. Some ports, such as Singapore, are increasingly focused on storing MGO LS.  The consequence is decreasing supplies of HSFO, which potentially contributes to fluctuations in price.

This effect may have caused the price difference for HSFO between Singapore and Rotterdam to go on the roller coaster ride in the second half of 2019. 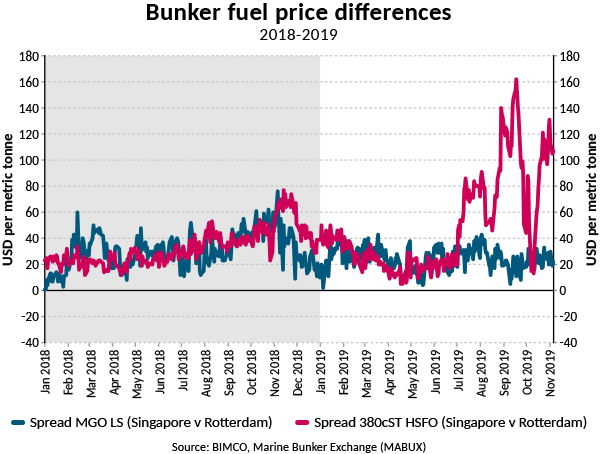 Bunkering in the western hemisphere

At the Panama Canal, one of the main bunkering hubs in Central America, a similar development has taken place. MGO LS prices have remained relatively stable through 2019, whereas the price for HSFO, in the second half of 2019, has fluctuated considerably in the USD 300-500 per metric tonne range with the spread widening to a level on par with price of HSFO.

Knowing about the different price levels between ports enables shipowners to save massive amounts on their fuel oil bill if bunkering operations are scheduled optimally. However, the recent volatility of prices and the chance of fuel non-availability in ports will certainly challenge optimal bunkering operations in the coming year. 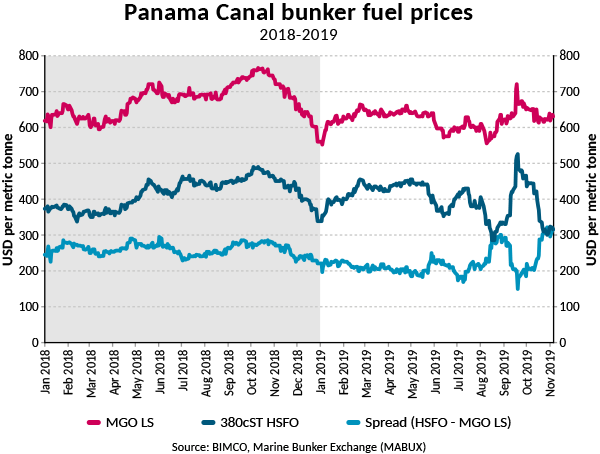 As fundamentals are off, setting up scenarios will help

The massive uncertainty in the market is clearly interfering with the usual pricing mechanisms. BIMCO reckons, that it is no longer fundamentals driving the market, but rather a market dictated by uncertainty, speculation and general fear of where the bunker market is heading.

A market no longer operating by fundamentals will be hard to forecast. Instead, we can construct potential scenarios, but even then, reality rarely conform to our assumptions. The scenarios presented below are based on BIMCO’s assumptions.

Shipowners are ready, are bunker suppliers?

Conflicting narratives are circulating in the market, as IMO2020 draws close. BIMCO recently reported, that while shipowners are ready for the upcoming sulphur regulation, the bunker market is not. Availability will vary significantly between ports and adequate supply in main bunkering hubs may not be enough to cushion the blow from IMO2020. Conversely, others are expecting less disruption from the new regulation and expects to continue onward with business unhindered.

No matter the outcome, IMO2020 will surely mark a period of change, both on the regulatory and operational side.

Contact online
BACK TO: Macroeconomics: World growth and trade volumes under pressure, but still positive NEXT: Fuel spread now available for 32 ports on BIMCO website