Also contributing to the June record was South Korea, as exports to the other main Far Eastern buyer reached an all-time high volume of 2.3m tonnes.

1.2m tonnes were shipped to China between 1 June and 30 June, up from 1m tonnes in May and worlds apart from no exports at all in the months of August through October in 2018 and again in January 2019.

“From being a very consistent and significant buyer of US crude oil until the trade war changed it all, China was back above a 1 million tonnes in June 2019.

As China stopped buying in August 2018, South Korea became the no 1 destination for US seaborne crude oil, taking 1.5m tonnes on average per month in 2019, and setting a record of 2.3m tonnes in June 2019. 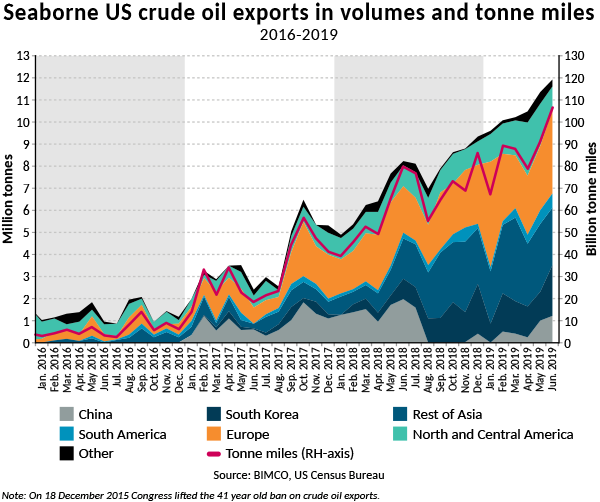 South Korea took over as main destination when China left

Taking 2.3m tonnes of crude oil from the US in June, meant that South Korea was the main destination, buying 19% of total seaborne US crude oil exports in that month.

The same goes for India, which imported an average of 1.3m tonnes in March through June from the US, while cutting its Iranian imports sharply from 1.4m tonnes in March and April to zero in June. India used to be Iran’s second largest buyer of crude oil after China.

“Crude oil tankers enjoy higher tonne mile demand, when India turns to the US instead of Iran to source its need for crude oil.

Geopolitical instability is often the main reason behind changes in the trade patterns of the oil tanker market.

No other large-scale changes have appeared

While North and Central American seaborne imports were steady at 1m tonnes per month in 2018, 2019 has seen a gradual lift in crude oil imports from the US, to the countries in those regions. Peaking in April 2019 at 2.4m tonnes while falling back to 1.1m in June, the monthly average for the first six months of 2019 has reached 1.6m tonnes. Up by 65% from the first six months (H1) of 2018.

With US crude oil oil exports increasing at a very high pace, one could easily be drawn to make faulty conclusions with regards to trade flows. But while export volumes of US crude oil to various regions have enjoyed double digit growth rates, trading patterns have been the same.

Europe grew its imports by 52% in H1 compared to the same period in 2018, but this was simply a case of proportional growth in volumes to the increased total crude oil exports from the US. Europe’s share was at 31% of total seaborne US exports compared to 33% last year.

Same thing was witnessed in the case of North and Central America, which share-wise took the same amount as last year, but volume-wise were up 9.6 m tonnes with an accumulated Y-o-Y growth of 64%. In this case, one single country can easily be singled out and that is Canada, which accounts for 84% of the 2019 imports into North and Central America.