Tanker Shipping: A boost from the 2020 sulphur cap will not make up for a fast-growing fleet.

Even with the sulphur cap expected to give a boost to the tanker market, high fleet growth will put pressure on earnings.

Rising geo-political tensions have led to disruptions to the tanker shipping industry and all other ships trading in the Persian Gulf. Tensions have risen following the expiry of waivers to the US imposed Iran sanctions, as well as attacks and arrests of ships sailing through the Strait of Hormuz.

Despite the ending of waivers which the US had hoped would lead to all countries stopping their imports of Iranian crude oil. This has not been the case with the Chinese in particular continuing; their crude oil imports from Iran totalled 11m tonnes in the first six months of the year. This is 30.1% lower than last year and imports have slowed throughout the year; averaging 2.3m tonnes in the first 4 months but subsequently slowing to 1.1m tonnes in May and 0.9m tonnes in June. 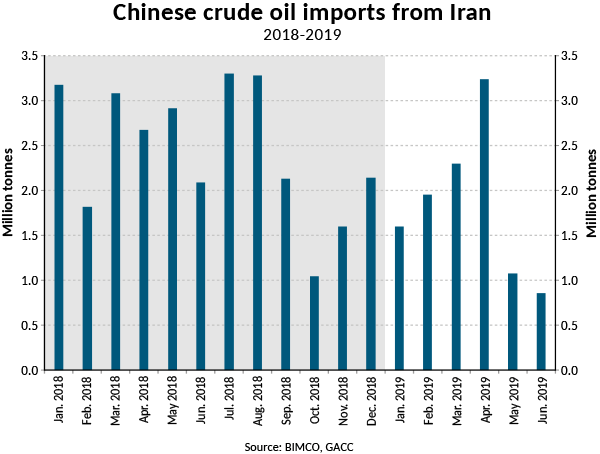 Exact data for Iranian crude oil exports does not currently exist. Reuters has reported that a Trump administration official estimates that 50-70% of Iranian’s crude oil exports are for China and around 30% go to Syria. The now renamed Adrian Darya 1 (formerly Grace 1) was arrested while believed to be sailing with crude oil from Iran to Syria, in breach not only of US sanctions against Iran, but also EU sanctions against Syria.

Tensions remain high in the Persian Gulf, where a US-led mission to ensure the security of international ships when transiting the Strait of Hormuz has so far been joined by the UK, Australia and Bahrain. Iran’s President Rouhani has been quoted by Reuters as issuing a veiled threat that, should Iran’s crude oil exports be forced to zero, security in international waters could not be guaranteed.

In reaction to the first attacks, on two tankers transiting the Strait of Hormuz in June, crude oil freight rates from the Persian Gulf to China doubled over the course of a few days, as BIMCO reported. They soon returned to previous levels as it became clear that despite the added risk, maritime operations would continue at close to normal levels and shipowners would have to absorb the higher insurance cost.

There was a sudden jump in earnings for the largest crude oil tankers in August, with VLCC earnings reaching their highest point of the year at USD 37,239 per day on 16 August. Earnings for the smaller vessel sizes have remained much more stable, and after falling fast at the start of the year, Suezmax earnings have averaged USD 16,716 per day between June and August, while an Aframax tanker has in the same period earned an average of USD 12,215 per day.

Oil product tanker earnings have been volatile over the summer, falling to below USD 10,000 per day for all vessel sizes in July, but have since risen again, with LR2 rates reaching USD 21,542 per day on 9 August, and at the end of August, remain above USD 19,000 per day. 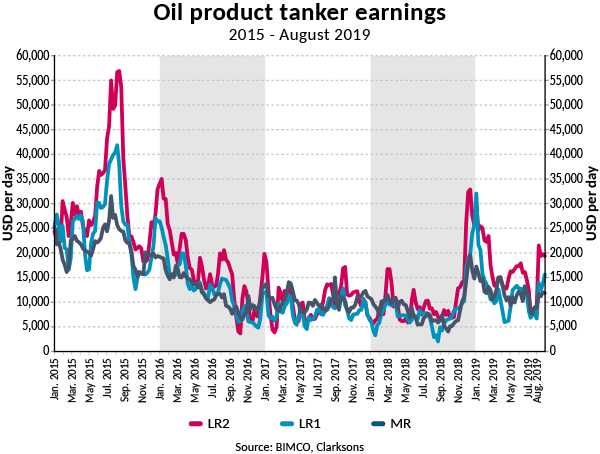 US exports of finished petroleum products were down 4.5% in the first five months of the year. A longer than usual refinery maintenance season which was brought about to allow refineries to produce the low sulphur fuel oil needed by the maritime industry come 2020 by avoiding further maintenance shutdowns which are traditionally performed in the last few months of the year. Exports of finished petroleum products have so far this year averaged 3.3m bpd.

By the middle of August, the total tanker fleet has already grown by 4.3%. Growth in the crude oil tanker fleet is particularly high with BIMCO expecting full year growth of 5.3%. The higher fleet growth comes not only from increased deliveries, but also from slower than expected demolitions.

Only 2.1m DWT of crude oil tankers has been demolished so far this year, in response BIMCO has lowered its expectations for crude oil tanker demolitions in 2019 from 9m to 4m DWT. 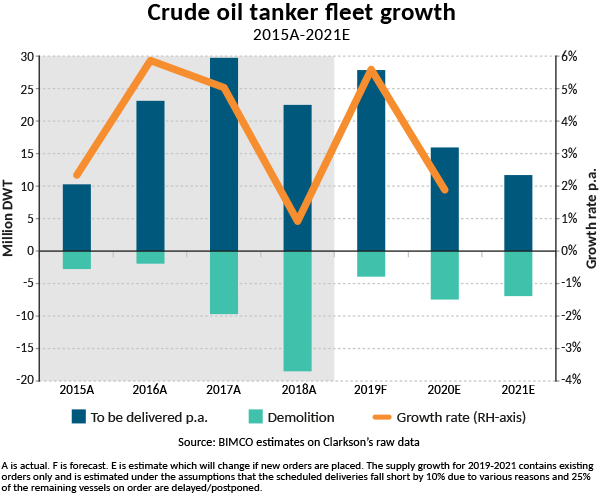 In contrast to the disappointing demolitions, ordering has picked up. New orders for the total tanker fleet have increased to 13.1m DWT. Since May 6 VLCCs of 300,000 DWT or more have been ordered as well as 30 Aframaxes. As BIMCO expects the total tanker fleet will grow by 5% this year, the already over supplied market has no need for extra ships, and further ordering will only worsen future market conditions.

Demolitions of product tankers have also slowed down through the year, with owners preferring to keep their tonnage active in the hope of benefitting from additional demand for oil product tankers as we approach IMO 2020, and new low sulphur fuel types are made available around the globe. BIMCO expects this will provide a much-needed boost to demand for tanker shipping.

Recently contracting activity has slowed down in the oil product tanker market, with only nine MRs being ordered in June and July. The orderbook for oil product tankers now stands at 11.9m DWT, which is 15.9% lower than in August 2018, as more has been delivered than ordered in the past twelve months, a positive trend to be continued to enable a return to a more balanced market.

In July OPEC+ ministers announced that they would maintain their current output restrictions, of 1.2m barrels per day (bpd), aiming at reducing high stocks in an oversupplied market. The US has continued to increase its crude oil production and exports, with seaborne exports reaching a new record high of 11.9m tonnes in June. South Korea became the largest importer of US seaborne crude oil exports, after China all but disappeared from the market as its relationship with the US soured.

The increase in volumes from Saudi Arabia of 10.5m tonnes is good news for the shipping industry, as most Russian crude oil exports to China are through pipelines, and therefore have no effect on the crude oil tanker market.

Although Chinese imports from Saudi Arabia boost the shipping industry more than those from Russia, a resolving of trade tensions and a return of Chinese buyers to the US crude oil market would provide an even larger boost for crude oil shipping, as it would increase tonne mile demand.

Another boost to the industry comes from the ramping up of refined oil product exports around the world as the traditional Autumn maintenance season will be shorter, and volumes won’t fall as much as usual. As refineries start producing and selling low sulphur fuel, oil product tankers will be employed to transport the product to where it is needed.

Any further escalation of the situation in the Persian Gulf, as Iran has hinted could come should their exports be forced to zero, would have a severe impact on the tanker shipping industry as around half of all seaborne crude oil is transported through the Strait of Hormuz. Should it be further threatened, or outright closed, the tanker market would face severe consequences.

Contact online
BACK TO: Crude oil tanker freight rates from the Arabian Gulf to China double on the back of tanker attacks NEXT: Macroeconomics: Low growth persists amid trade tensions and a slowdown in global manufacturing