Container Shipping: The many pitfalls in the coming months will decide the fate of the year

As weak demand growth is forecasted for the coming quarters, the container shipping industry is set to return to negative margins.

The timing and impact of Chinese New Year always affects business during the first three months of the year – this is a first glimpse at the real trend, as we now have three months of data to smooth the seasonality and not only two.

A growth rate as low as 0.5% is a critical issue for an industry used to much higher growth – double digits for many of the years between 1999 and 2007, growing by an average of 10.2%, and coming down to an average of 4.3% between 2012 and 2018. Having said that, the underlying numbers reveal a somewhat confusing demand picture.

It is very positive to see demand growth on these long-haul trades, even though spot-freight rates on the Far East to Europe did not improve. Instead, the rates followed the same path as last year, holding steady in January and February and falling through March and April. At USD 743 per TEU on 24 May, spot-freight rates are at loss-making levels for the carriers, despite a lift in rates in May. Spot rates on trades bound for the US East Coast and West Coast are up by 7.7% and 22.7% respectively on average for January through April, compared with a year earlier. 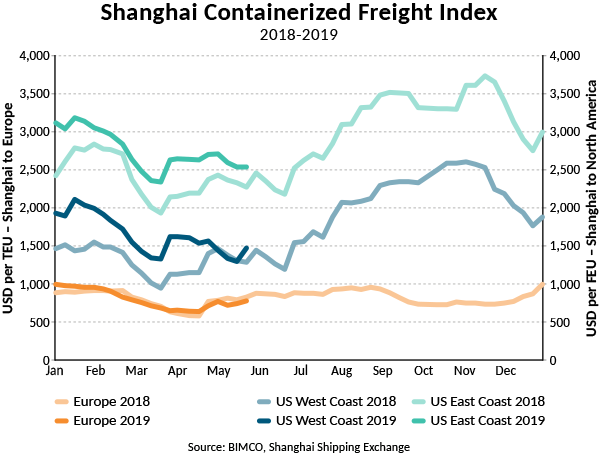 Volumes on the intra-Asian trades fell during Q1 (-0.2%). The drop is a sign of weakening volumes in the supply chains and, ultimately, the result of fewer new export orders received by Asian manufactures in recent months – something that will impact outbound volumes in the coming months.

Fewer export orders mean less transport of semi-finished goods between the Asian countries. So the freight rates on intra-Asian routes going from Shanghai to Japan, Korea and Singapore are increasingly relevant to keep an eye on, to spot the knock-on effect on the regional semi-finished goods market – and they are mostly moving sideways or slowly in decline. 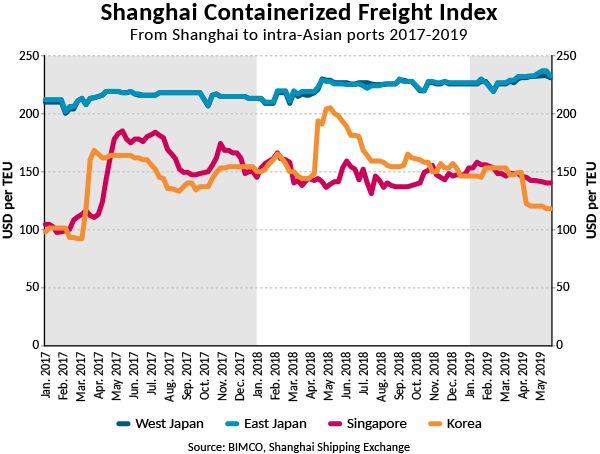 In March, Chinese leasing capital provided full financing of (yet another) full string of ultra large container carriers (10 ships – 15,000 TEU) for the already crowded Far East to Europe trade lane. The 10 ships represent a 40% jump in the estimate for deliveries in 2021.

The active fleet grew by 1.1% during the first four months of 2019, if measured by capacity. 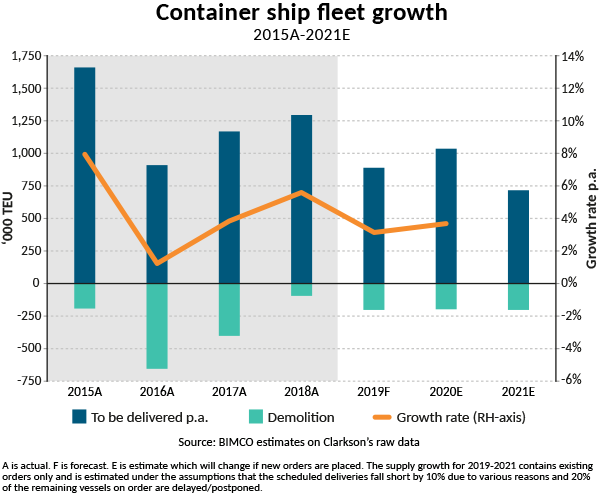 Our forecast is now for the fleet to grow by 3.1% in 2019. This would be the second-lowest fleet growth on record.

At the beginning of the year, BIMCO expected a small amount of capacity to be demolished. That amount is now predicted to double – to 200,000 TEU – on the back of much weaker than expected freight rates across the board for the year so far.

Only smaller ships will leave the fleet, as the larger ships are still comparatively new. Even though the market may stay unprofitable, sentiment, more than freight rates, has improved enough to disincentivise owners from scrapping; even a sluggish demand outlook will not cause massive scrapping.

Recently, the idle fleet has come down rather sharply. According to Alphaliner, the capacity of the idle ships amounted to 292,943 TEU on 29 April – down from 908,479 TEU on 4 March.

There has been no effect on time-charter rates yet, but these are the steps we watch out for:

In due time, this chain of events will lift time-charter rates if the market actors are patient. Rates for ships with a capacity of 4,250 TEU and less have been flat this year, but down 20-30% from the pinnacle of June 2018.

The time-charter rates for 6,500 TEU are now at USD18,000 per day (-5%), whereas rates for 8,500 TEU ships sat at USD26,000 per day in late May. The rates for those two segments moved up only a little since mid-February, as ships of that size were increasingly being left idle in January and February.

Overall, BIMCO has low expectations for demand growth in 2019. A protectionist’s approach to global trade – as mentioned in the article on macroeconomics – and a high sales-to-inventory ratio in the US set limits for how strong peak-season import will be.

The peak season for transported volumes is July to September for the Far East to Europe and North America trade lanes.

To get an early indication of how well the peak season on the long hauls in 2019 will perform, we watch the intra-Asian trades closely. As discussed earlier in the report, we have started to see some weakness. This is the downside risk for which we are watching out.

The global demand for a three-month period peaked in May through July in 2018 (see chart). Intra-Asian volumes tend to peak before the long-haul volumes do, as many of the semi-finished goods are in transit to final production stages just before the peak export season out of Asia starts in July. 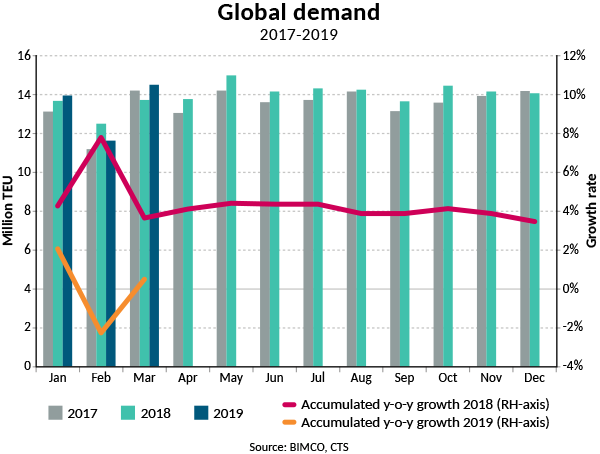 As the idle fleet comes down fast, it’s important to note that it is not a response to fast-growing demand – it is merely the result of fleet managers responding to margins that improve from highly negative to only slightly negative, which apparently prompts action among the owners.

The correlation is striking and simple: reactivation of idle ships limits the upside to higher operating margins.

Just as margins reach positive territory, the balance tips and another downturn begins. Ship owners’ and operators’ fleet management, much more than the changes in demand for container shipping, triggers these “cycles”. During 2011-2018, the main container carriers posted an average operating margin that was negative in 19 out of 32 quarters.

As BIMCO forecasts weak demand growth for the coming quarters, the container shipping industry is set to return to negative margins.

Contact online
BACK TO: Dry bulk: A struggling market gets all hyped up by Capesize volatility NEXT: Rising deliveries of Capesize ships pose a threat to the already fragile market balance