"It's the steel production, stupid!"

China’s increased use of scrap metal for its production of crude steel is fundamentally critical to the dry bulk shipping industry. Mostly Capesize ships are impacted by this, way beyond the temporary iron ore export disruptions in Brazil and Australia.

“For two decades the dry bulk shipping industry have relied on growth in Chinese steel production to continuously spur seaborne imports of high-quality iron ore – from Australia and Brazil.

That trend has now vanished and the Capesize ships operating on the spot market feel the pain. Growth in volumes are gone and iron ore is increasingly being shipped on long term contracts,” says Peter Sand, BIMCO’s Chief Shipping Analyst and continues: 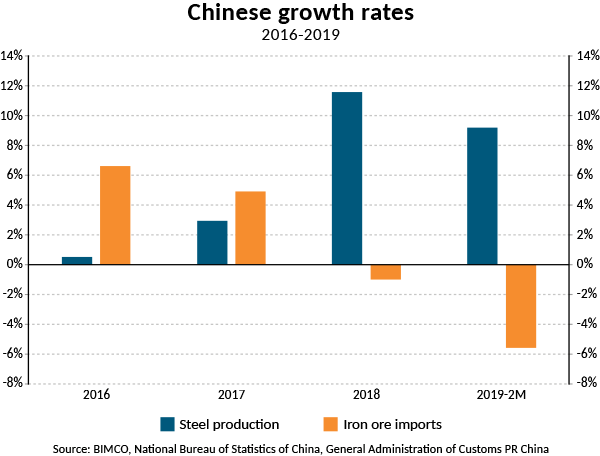 It’s no longer only a matter of squeezing out low-quality domestically mined iron ore from the list of ingredients to grow Chinese imports. The focus area of the past 5-10 years is changing. It has become secondary to the rapidly increasing use of scrap steel. This development is a very illustrative example of the potential negative impact the circular economy will have on shipping.

Changes to the Chinese steel-making industry have pushed a move towards increased use of scrap metal, away from using imported and domestically mined iron ore blend into a solid amount of coking coal.

“This year, BIMCO is putting special focus on this decoupling between steel production and iron ore imports, as the mega driver for Capesize transportation demand may not only disappoint, but worsen its fate,” says Peter Sand.

Keep an eye on China, as the rest of the world is fading

While India has now surpassed Japan as the world’s second largest steel producer – it produced only 12% of what China did in Jan-Feb 2019. Indian crude steel production grew by only 22,000 tonnes (+0.1%) in Jan-Feb 2019, according to the World Steel Association. In 2018, China produced 52% of all crude steel.

Disrupted production and exports of iron ore in Brazil…

The deadly collapse of the Dam I of the Córrego de Feijão mine happened on 25 January 2019. Immediately after - and during February and March - Brazilian iron ore export terminals and mining operations have been disrupted due to a wide range of issues. Issues and disruptions which are unlikely to go away soon.

The full extent of the damage will only be fully known later. Reports from Vale on changed iron ore sales guidance for 2019 have not been clear cut. BIMCO expects that iron ore exports in 2019 from Brazil will fall short of those seen in 2018, as exports from stockpiles may not fully compensate for the lost production. Brazilian iron ore exports dropped to a multi-year low in March 2019 as 22.2 million tonnes were exported, down from 30 million tonnes in March 2018.

Less than two months after the Dam I collapse; Australian exports were disrupted by the tropical cyclone Veronica (TC Veronica). Ports on the Pilbara coast in Western Australia were shut down from 22 March 2019 for a duration of 92-132 hours. This was the longest closure at Port Hedland, the key export hub, for many years.

“Exports during April from the Pilbara coast ports will be affected to some degree in the aftermath of TC Veronica due to the damage done, including flooding,” says Peter Sand.

Fortescue Metals Group reported lost production of 1.5 to 2 million tonnes. A total of 836 million tonnes of iron ore was exported from Australia in 2018 – 83% went to China, 16% to other short haul Asia buyers and 1% to the rest of the world. Total estimated fallouts amount to 2.75% of 2018 exports.

On 9 April 2019, Rio Tinto confirmed another fire had disturbed its export capacity in the Port of Dampier (Western Australia). No changes to the guidance on 2019 shipments have been issued. 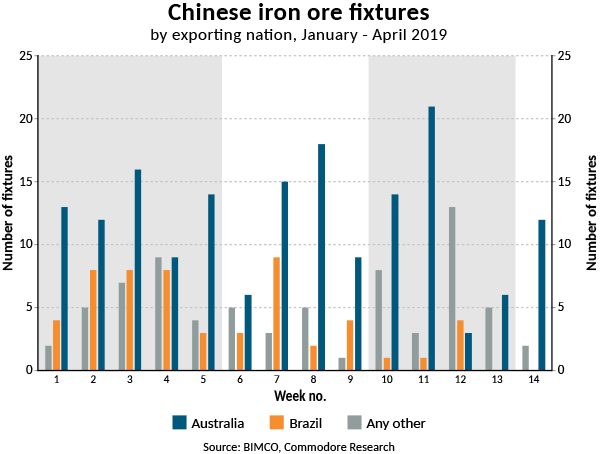 While exports out of Brazil continue at slow pace on long-term chartered in ships – there is little left for the open spot market. No spot fixtures from Brazil have been reported for weeks 13 and 14. That contrasts the first week of April (week 14) which saw 12 China-bound spot fixtures from Australia according to Commodore Research.

How can that be? Isn’t the BCI simply the index value of the “average of the 5 time charter (T/C) routes for Baltic Capesize Index”? No, it’s not. The BCI is compiled from 11 routes in total: the 5 T/C routes and 6 “dollar per tonnes” routes. The T/C routes account for 50% of the BCI with the dollar per tonnes routes accounting for the other half. Most relevant in this context is the fact that Brazil-related trade has a higher weight in BCI than in the average for the 5 T/C routes.

Demand was already falling, and the Brazilian dam disaster only made things worse. Any upbeat sentiment left from 2018 that had kept rates around USD 15,000 per day in January evaporated instantly.

Comparing the BCI and the actual rates, it looks like the BCI tends to exaggerate the actual development. When the 6 “dollar per tonnes” routes over the same period of time, from 25 January to 2 April, fell between 27% and 45%.

Why is it that the BCI has a much higher volatility than any of its components? And why is it falling by 95% - when nothing else is? Is it because volatility is endeavoured in an FFA market? Bottomline is that, freight rates are low in the Capesize market right now – but freight rates did not drop to 1/20 of what they were on 25 January over the course of the following 9½ weeks. 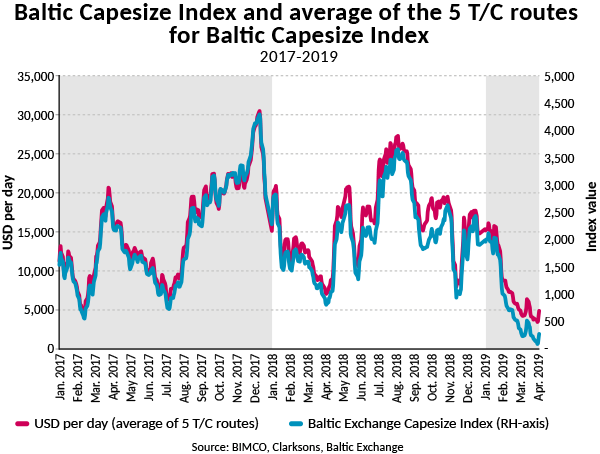 Since freight rates for Brazilian exports have been particularly depressed since the Brazilian dam collapse in January – the BCI has fallen dramatically. As Brazilian exports weigh more in the BCI than they do in the average of the 5 T/C routes – a gap between the two has opened.

“Looking forward, iron ore will no longer drive the Capesize market up as it has been doing for two decades.

Freight rates will become more negatively impacted by fleet growth than before, as demand is now falling, for the all-important Capesize commodity.

This year alone, 13 Capesize ships have been demolished, while 12 have been delivered including five Valemax. Over the past 12 months – the Capesize fleet has grown by 2.8%.

If iron ore demand from China stalls or outright falls going forward – then the fleet size must stall or fall – simply to keep the market balance from getting worse”, says Peter Sand.

Contact online
BACK TO: Meet BIMCO's Chief Shipping Analyst in Rotterdam, the Netherlands NEXT: US seaborne crude oil exports hit record high for fifth month in a row