Calling a market turnaround to perfection is pure luck. But scouting for pillars that would support a higher level of demand makes sense. First up is the next Brazilian soya bean export season.

The extent of the freight rate recovery in 2018 was limited – when compared with initial expectations – by a faster-growing fleet. Q4-2018 wasn’t as strong as it often is either, but we now know that was merely the beginning of a sharp downturn. On top of that, in the first month of 2019, leading the way even further down was a massive lack of cargoes. By early February, the industry appeared to be paddling in quicksand.

The November dip in Capesize freight rates was just an ill omen of what was to come. For the whole of January, there has been no support for Supramax, Panamax or Handysize freight rates; it is as if the market has turned back the clock by two years, touching at freight rate levels last seen in early 2017. 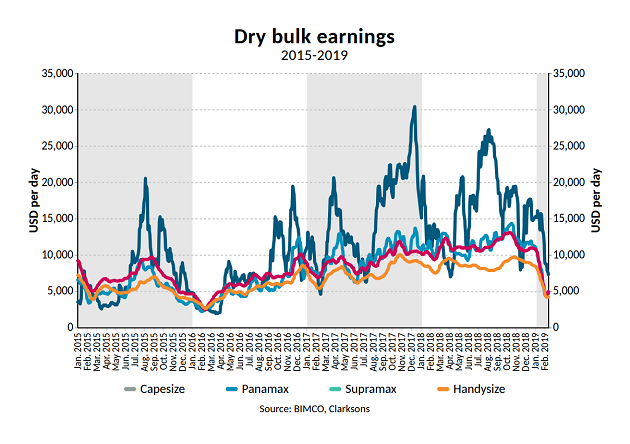 At the levels recorded on 31 January 2019, Handysize, Supramax and Panamax all had earnings of about $6,000 per day, whereas the 180,000 DWT Capesize ships earned only a little more than $11,000 per day. All of them are operating at loss-making levels.

A major challenge is created because seaborne transportation is completely price inelastic. In other words, shipping cannot create higher demand through lower prices – it is simply the servant of world trade. Only a continued focus on removing barriers to trade and lifting global economic growth can support the demand side of the shipping industry.

Chinese dry bulk imports – the main driver on the demand side of the fundamental balance – have exhibited weakness, growing by only by an estimated 2.5% in 2018. Minor bulks (minerals, metals, forest products, and so on) were among the positive drivers, while a massive headwind was blowing against grains, soya beans and iron ore.

At the end of January, a devasting dam collapse in Brazil, in which more than 140 people died and 190 are still missing, has crippled the country’s iron-ore exports for the foreseeable future.

This is a developing story, but it will surely disrupt the Capesize market in a negative way, as longhaul Brazilian exports are substituted with shorter hauls – most likely from Australia – considering Asian imports only. On 6 February, Vale reported suspension of operations at a mine capable of producing yet another 30 million tonnes a year.

All this is bad news for the standard Capesize ships, as volumes goes down and new VLOCs are launched rapidly throughout 2019.

Preliminary data points show that 3.2m DWT was delivered in January 2019 – the highest for a single month since January 2018. January is traditionally the month that sees the highest number of launches. Just three ship demolitions did little to counter the fleet growth of 0.3%.

As the order book is no longer massive, global shipyards will tend to deliver newbuild ships closer to the scheduled dates than usual. Consequently, BIMCO has adjusted the slippage rate in its forecasts down to 25% in 2019 from 35% in 2018.

The current level of deliveries forecast for 2021 (16 million DWT) – and estimated on the back of the existing orderbook only – shows that interest in placing new orders has been subdued since the middle of 2014. The only exception is the period September 2017 to January 2018 when freight rates were at their highest level for a long time.

For the full year, BIMCO estimates a dry-bulk fleet growth of 3.1%, up from 2.9% in 2018. We predict demolition activity will remain low. Should our estimate of just 4m DWT exiting the fleet prove too low, an additional 10m DWT leaving will bring the fleet expansion down to 2%.

This sensitivity shows that even a much higher level of demolition – if freight rates stay low for an extended time – may not be enough to create a turnaround. It may only make sure fleet growth stays on a par with potentially lower demand. 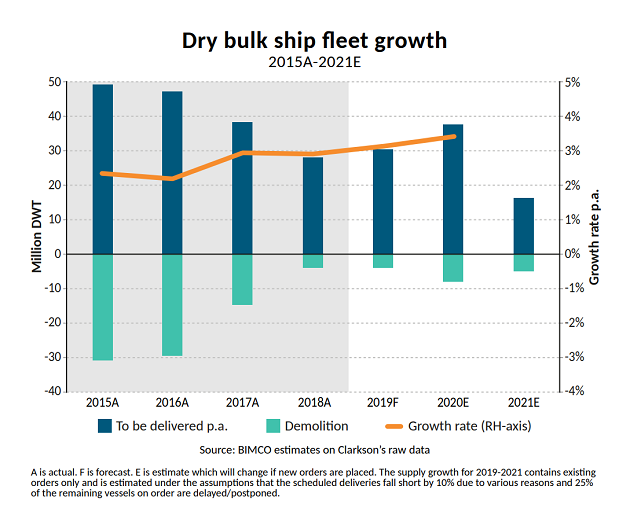 The deliveries scheduled for launch in 2019 includes: nine Valemax ships; 52 Very Large Ore Carriers (VLOC); 20 standard Capesize 133 Panamax; 122 Supramax; and 73 Handysize. A faster fleet growth in 2019, combined with a deteriorating market, means that a broad-spectrum impact will be felt. No sub-sectors will be shielded from the way the market is developing – neither from a growing fleet nor the synchronised freight rate movements.

Calling a market turnaround to perfection is pure luck. But scouting for pillars that would support a higher level of demand makes sense. First up is the next Brazilian soya bean export season, which might come earlier this year, as harvest conditions have reportedly been favourable. As a result, we expect to see soya bean cargoes entering the market as early as the second half of February.

The trade war disrupts normal seasonality, but if we see easing trade tensions, soya beans may well be exported from the US in the off-season. Owners and operators could end up splitting repositioning of open-spot ships between Brazilian and US waters and both may see exports increase within the coming weeks or months. 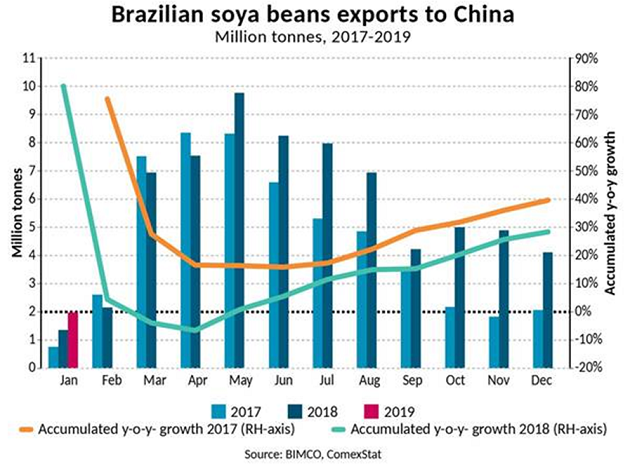 Both trade lanes – Brazil-China and US-China – are long hauls that will underpin the market as cargoes start to flow. The issue is that China’s insatiable appetite for soya beans is currently challenged by more than just the trade war; an outbreak of African swine fever has resulted in a massive culling of pigs and a government proposal to reduce the protein levels in pig feed. Nevertheless, we expect a solid import level to stick around.

Everything above must be considered against the backdrop of a weakening macroeconomic outlook. A backdrop that may be of such significance that even strong, regular dry-bulk seasonality may not be able to lift demand to an extent that brings back profitable freight rates.

Contact online
BACK TO: Tanker Shipping: Geopolitics and overall fleet growth are the main drivers NEXT: Macroeconomics: Trade tensions and rising risks lead to slowing growth