Tanker Shipping: Winter is coming, random shocks can be powerful, but only fundamental improvements last

The continued severity of the tanker market conditions has made owners dig deep into the oversupply of capacity. Still BIMCO expects the tanker fleet to keep growing. A short-term rate recovery is not expected, as it is ‘maintenance season’ for the global refining industry in September and October.

Monthly average earnings for a VLCC in April and May were below USD 4,000 per day; in June and July, they had moved up to a still sluggish level at USD 7,000-8,000 per day; and. August and September saw levels around USD 11,000 per day – all in the loss-making territory. But then, October saw average earnings shoot up to USD 33,500 per day.

Where did that come from? In all fairness we are not sure whether this is a dead cat bounce, or winter arriving early, just as refinery maintenance has been concluded for the season. Impact has also come from the ongoing and busy typhoon season in the North West Pacific, affecting Asia at large, that has disrupted normal shipping business and may have tilted the balance in favour of owners for the time being.

What we do know is that, although crude oil is not an official part of the trade war, the two months of August and September have seen US exporters of crude oil seeking new buyers, as their previous number one purchaser, China, has taken zero crude oil.

New purchasers have been found in the Atlantic Basin and, fortunately, in the Far East. The new number one long-distance buyer, South Korea, has helped in keeping tonne-mile demand almost unchanged from July’s record high. In China's absence, Canada has emerged as the new top buyer.

For oil products, it’s been unexciting all year. But that may change shortly. Earnings for an LR2 moved up to USD 12,838 by 2 November 2018, with LR1s and MRs rising only slowly.

We know oil tankers often enjoy an upswing with some lag to the crude oil tankers, and this may bring a little relief to the oil product tankers in the final two months of 2018.

A glut of gasoline in the Far East has brought down refinery margins, as supply has exceeded demand. This may also limit the arbitrage opportunities for oil traders, ultimately limiting demand for oil product tankers too. 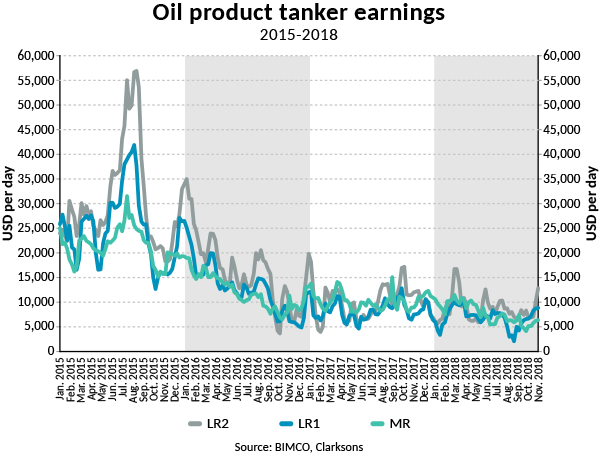 For the oil product tanker fleet, our forecast is steady from early August with tankers being delivered as predicted and just eight MR orders, by unknown owners, having been placed at a South Korean shipyard since then. We also keep our demolition forecast intact, resulting in an estimated fleet growth of 2.4% – the lowest level since 2012. More importantly, our 2019 fleet growth forecast remains fixed at 2.4%, with deliveries and demolitions both falling.

It is not only orders for oil product tankers that South Korean shipyards have been able to sign with owners/investors. Thanks to government support, they have landed 44.5% of all orders in 2018 to date, measured by Compensated Gross Tonnage (CGT); this is up from just 27.6% for the whole of 2017. The order book has been filled with classic South Korean ‘trademarks’ of large and complex ship types, including Very Large Gas Carriers and Ultra Large Containerships. 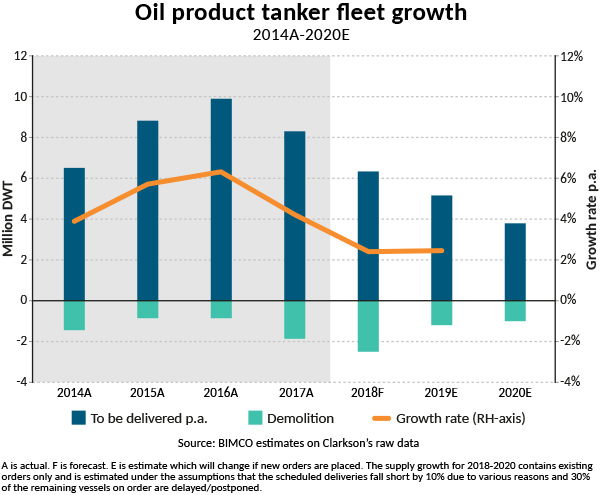 For crude oil tankers, the recent upswing in earnings caused fleet growth to rise earlier than expected. Demolition expectations are unchanged, but the pace of delivery is slowly going up. BIMCO expects the crude oil tanker fleet to increase by 0.9% in 2018. Looking into 2019, much depends on the level of demolition.

Following three low months of ordering activity from June to August, September saw owners and investors showing a renewed interest in crude oil tanker tonnage. The combined order for 1.7m DWT of Suezmax (5) and Aframax (8) was the highest since June 2017.

Can we expect a normal winter market for tankers where rates go up as demand for shipping increases? What we saw in October was positive, but there is likely to be volatility this winter as geopolitical issues have been piling up. However, we expect some positive seasonality to return, after last year’s absence.

The US has granted ‘waivers’ to its sanctions against Iran to eight countries including, Japan, India, Italy and South Korea, all of which are among the top 10 buyers of US crude oil. Initially, the impact will be that oil exports out of Iran will continue. In the medium term, it will matter how much oil imports are waived and whether it is a fixed volume, or one that must be gradually reduced.

A large proportion of Iranian exports go to Asia – two-thirds to India and China alone.

On top of the already low visibility into the demand for oil and, subsequently, tankers, we see changing trade lanes caused by the US sanctions on Iran. A shift away from Iran primarily to other Middle Eastern exporters doesn’t change trading patterns much, as barrels will be switched with heavy sour crude oil of a similar quality.

Elsewhere in the world, Libya is scaling up production and the US has set a record for crude oil exports to all nations other than China for seven months in a row.

The International Energy Agency (IEA) has revised its estimates for global oil demand down for both 2018 and 2019. This is because of trade concerns, weaker economic outlook, higher prices and a revision of data. Despite that, Q4-2018 is expected to deliver the first quarterly oil demand exceeding 100m barrels per day (bpd) at 100.2m bpd. 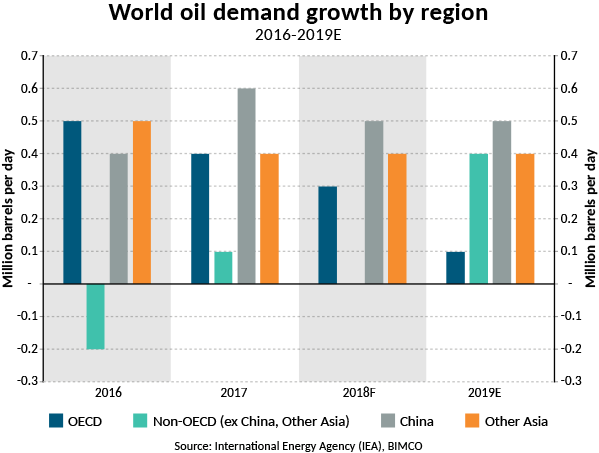 The price of crude oil has gradually slipped during October; a development signalling that supply is again running ahead of demand. Both the IEA and the US Energy Information Administration (EIA) estimate that global oil inventories will build in both Q4-2018 and H1-2019.

Contact online
BACK TO: Trade war leading to headwinds for the fragile dry bulk recovery NEXT: Dry Bulk Shipping: BDI weakness in Q4, as the trade war limits demand growth and demolitions stall