When profits finally arrive, everyone breathes a sigh of relief. Several years of very bad markets have come to an end, but how do we retain the profitable freight rates?

Freight rates have recovered a lot in 2018, but it is not strong across the board. After a steady decline since April, earnings for handysize ships slipped back into lossmaking territory on the very last day of July – and rates have kept sliding in August. In sharp contrast, the capesizes have turned around a fairly weak start to the year, and are now at USD 16,019 per day on a year-to-date average per 10 August. Disregarding the short spike in December 2017, capesize earnings are managing to stay at a high level not seen since March and November 2014. 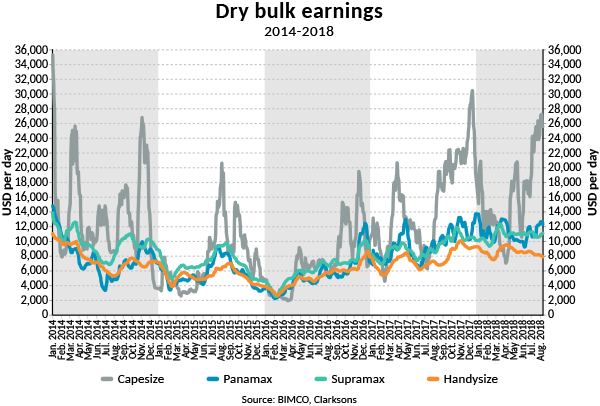 One of the drivers in the market during the first half of the year has been US coal exports, which were up by 31% in the first six months, peaking at 10 million tonnes in April. In early August, international coal prices started to weaken, but remain at a high enough level for US exports of thermal and coking coal to be attractive for buyers – especially in the Far East. BIMCO expects this to remain a driver, unless coal prices drop to a level that price out US coal for Asian buyers.

In 2012, US coal exports were generating more tonnes miles than Chinese coal imports.  While US exports have rebounded since Q3-2016, current tonnes-miles demand remains below previous highs.

The usual mega driver, Chinese imports of iron ore, is disappointing this year. It started at the second-highest imports level on record in January, only to deliver fairly steady – but a bit lower – volumes from there onwards, compared to last year. Total imported iron ore volumes are down by 0.8% in the first seven months from last year. The slowdown has been going on for more than a year now, with H2-2017 volumes only 0.96% higher than H2-2016.

In recent years, Chinese steel mills have delivered an unchanged output, but the switch away from domestically mined iron ore caused imports to keep growing. This year, China’s steel production is at a record high level, as more efficient mills are opening. High production is also coming on the back of strong steel-producing margins. Many of these mills are electric arc furnaces (EAF), which make steel out of scrap iron. China has always preferred blast furnace (BF) production to EAF, but EAF output has rapidly increased recently and now affects shipping. This results in more steel produced without more iron ore and coking coal needed in the process.

If that is a sign of what’s to come, Chinese iron ore imports could begin to drop faster than we have seen so far in 2018. China’s availability of scrap steel is forecast to double from 2015, to reach 300 million tonnes by 2030 (source: World Steel Association). Note that China may still be cutting absolute steel-production capacity, but it is overcapacity and substandard capacity they are cutting – not production output.

Monthly year-on-year growth data for the dry bulk fleet shows that the slowing expansion has bottomed out. Since the end of March, the fleet has grown by an average of 2.2% compared with the same month last year. The change in trend comes on the back of stablising capesize fleet growth, and the return of a growing panamax fleet. The latter is mainly a result of the sudden and almost complete end to demolition activity involving the 65,000-99,999 DWT workhorses of the fleet. Only 8% (214,000 DWT) of total demolished capacity in 2018 were panamaxes, down from 24% in the past four years.

Across the board, demolition of dry bulk ships has slowed to a trickle: only 2.6m DWT has been demolished. This compares with 14.7m DWT in 2017 and 29.5m DWT in 2016. It’s a crystal-clear reflection of higher freight rates that now stop owners from scrapping ships. 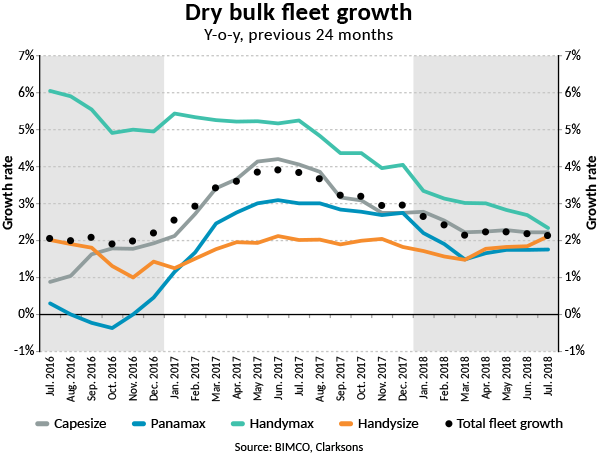 The halt in demolition activity also means that we need to revise upwards our fleet-growth estimate for 2018. This narrows the improvement of the fundamental balance. Where the former is down to human nature in the shipping market (not handling the supply side with care), the latter relates somewhat to the trade war, the drought in Europe and Australia limiting grain exports, and China growing its iron ore imports more slowly than forecast.

The fleet will now grow by 2.7% if our revised demolition estimate of just 5m DWT is realised. 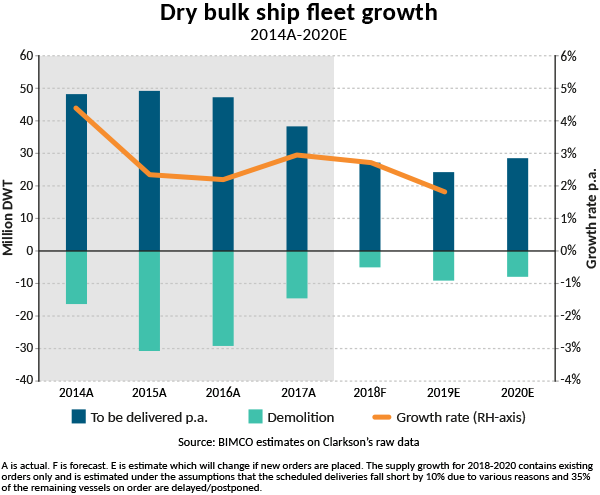 Looking into 2019, a sensitivity analysis shows that a reduction of demolition in 2019 – to 5m DWT from 9m DWT (estimated) currently – will lift the fleet growth to 2.3%, which is also above our long-term estimate of demand growth.

Our previous dry bulk report was titled ‘No more room for newbuilds’. Three months have passed since then and 5.8m DWT has been ordered during that time; 14 of 24 ships were panamax and six were capesizes. BIMCO has long held the view that demand growth is better for the larger ship sizes compared with the smaller ship sizes, but if overcapacity reigns that upside will never materialise.

When profits finally arrive, everyone breathes a sigh of relief. Several years of very bad markets have come to an end, but how do we retain the profitable freight rates? We all know the answer – make sure fleet growth does not exceed demand growth.

In 2018, demand has outpaced fleet growth and year-to-date (10 August) panamax average earnings stand at USD 11,181 per day, up from USD 8,654 (+29%) per day. You could argue that owners should have kept up the pace of demolition, making an extra USD 1,000-2,000 per day on the 11,000+ ships in the fleet. But as the industry is so fragmented, with thousands of owners globally, every ship is important to its owner. As you can’t scrap one-quarter of a ship, the industry relies on the larger owners to do ‘the right thing’ to balance the markets by means of demolition. In 2017, 121 shipowners scrapped 219 ships. In 2018, a mere 34 shipowners sold 37 ships for scrapping – the lowest level since 2007.

What comes next? More dry bulk commodites are being tariffed by both parties in the trade war. Full disclosure of this is found in a separate and updated BIMCO overview of the trade war and its impact on shipping.

As we close in on the fourth quarter, and the US soya bean export season, the real effects of one of the main tariffed commodities will be exposed. What we know right now is that Brazilian exports have been higher than last year, but – so far – they remain nowhere near a level where they can fully substitute for US exports to China.

Other negatives coming out of the trade-restrictive measures are the protective actions taken by EU to shield its steel market and industry against steel that would have been imported by the US, but now seeks a new buyer. India is rumoured to be following suit.

As demand for transportation of dry bulk commodities increases throughout the year, BIMCO expects the recovery of freight rates to continue slowly but steadily. Expect higher volumes for coal, iron ore and wheat to dominate the market in the second half of the year.

Contact online
BACK TO: Shipping is increasingly caught in the trade war line of crossfire NEXT: Container Shipping: it is obviously very difficult to hold down fleet growth to improve the market.