Container Shipping: it is obviously very difficult to hold down fleet growth to improve the market.

The capacity of the fleet is growing too fast for the demand to cope with it. All three aspects of the supply side have pushed up the fleet growth – in nominal as well as active terms.

When judged by global volume, demand growth alone – 3.8% for the first six months – is not that bad. It’s just that the nominal fleet grew by 3.9% during the same period, and the active fleet even more. The trend points towards lower demand growth this year, as global volume demand has fallen since April.

It goes for all shipping sectors that tonnes-miles demand is measured by the volumes multiplied by the sailing distance. This gives a bit of insight into why container shipping is facing headwinds at the moment; 83% of the newbuilds delivered in 2018 are ships with a capacity of 10,000+ TEU. They were made for long sailing distances. This compares to 37% of the volume growth being short-distance, intra-regional trades (for example, intra-Asia or intra-Europe).

The positive economic development in Europe is mirrored by imported volumes, this year in particular. Inbound volumes into Europe are up 4.1% (+646,000 TEU). But the ‘problem’ is that imports are growing on secondary, middle-distance trades from North America, the Indian subcontinent and the Middle East, and South and Central America to other countries – trades that are currently serviced mostly by ships below 10,000 TEU.

Growth on the longest distance tradelane from the Far East, which accounts for half of all European imports and 10% of global volumes, is up by a meagre 1.3% (+99,000 TEU) in the first half of 2018. (datasource: CTS).

The development was much better on the other significant long-distance trade from the Far East into North America, where imports were up by 214,000 TEU (7.1%). Interestingly, too, imports into South and Central America grew strongly in all overseas trades apart from North America. Double-digit growth rates, between 11% and 18%, were recorded from Asia, Europe, and the Indian subcontinent and Middle East.

After four hectic months of chartering, in which 6-12 month time charter (T/C) rates reached a three-year high in June, interest has cooled down. T/C rates for a 6,500 TEU ship have fallen from USD 19,000 per day on 22 June to USD 14,500 per day (-24%) on 10 August. Charter rates for smaller ship sizes have risen and fallen to almost the same extent. 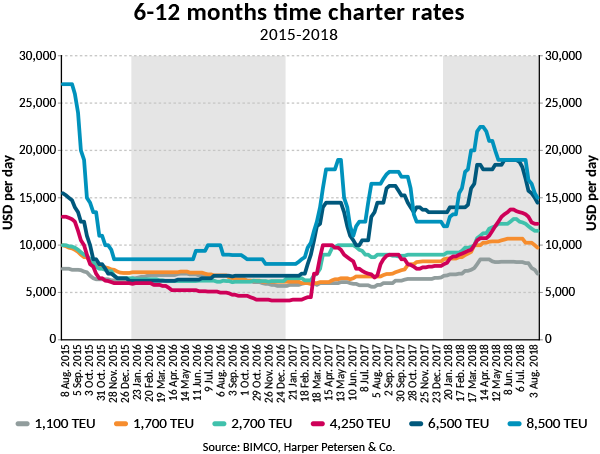 Whereas the initial rounds of the trade war between the US and China were focused on steel, aluminium and soya beans, the more recent rounds (July and August) – and those already being proposed for future implementation – are much more focused on containerised goods. BIMCO estimates that tariffs imposed on 6 July affect 670,000 TEU (7 tonnes cargo per TEU), with an additional 270,000 TEU affected from 23 August. In total, 9% of US West Coast imports are now part of the speeding train towards a trade war.

The capacity of the fleet is growing too fast for the demand to cope with it. All three aspects of the supply side have pushed up the fleet growth – in nominal as well as active terms.

The yards have delivered 947,000 TEU of newbuilt containership capacity, slightly above our expectations. What has been completely off our expectations has been the fact that only 36,833 TEU of capacity was demolished by early August. During Q2-2018, just five ships (9,608 TEU) were taken out. It’s been 10 years since we last had such a low level of capacity removed. Only small and old ships have been broken up. In 2018, the average ship being demolished was 24 years old, with a capacity of 1,754 TEU. In 2017, the average ship was 21 years old and 2,807 TEU in size.

The third element is the roller-coaster ride of reductions and reactivations of the idle fleet. This has mainly been pushing the active supply growth up, resulting in falling freight rates as demand is growing at a lower pace. Starting the year at 417,000 TEU, the idle fleet dropped to 200,000 TEU by February, only to rebound strongly to 627,000 TEU by March. As per end of July, 341,000 TEU is idle.

Moreover, the fleet is more and more a matter of two tiers, divided somewhere short of 10,000+ TEU. Most of the new capacity is above the threshold, whereas all of the demolition is below. The two are still connected, but they get further and further apart – both in terms of deployment and earnings. 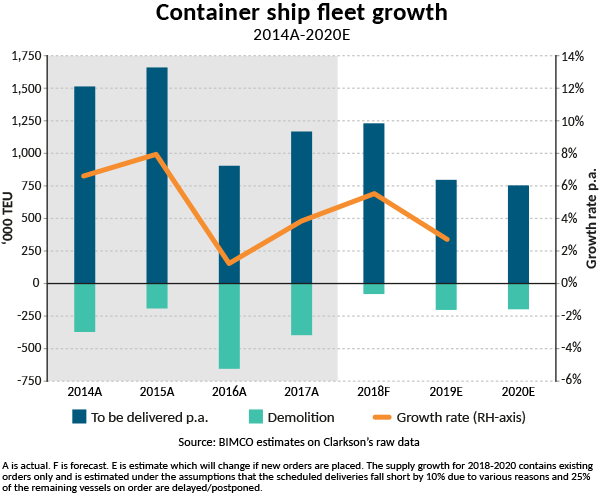 In addition to that, we revise our demolition estimate downwards, from 250,000 TEU to just 80,000 TEU. This results in an estimated nominal fleet growth of 5.5% for 2018.Should demolition volumes only reach 40,000 TEU, the fleet would then grow by an estimated 5.7%.Sensitivity analysis remains as important as ever to understand how the movements in a market such as this affect the freight rates in the end. If you keep demand growth and idle fleet fixed, the fundamental balance will deteriorate if the fleet growth goes up from 5.5% to 5.7%.

Newbuild deliveries for the remainder of the year are still biased toward the ultra large container ship (ULCS), but not as much as in the first seven months. The share of ULCS capacity comes down from 83% to 71% for the final five months. The ULCS will be delivered from yards in all three key shipyard nations: South Korea, China and Japan.

As the trade war goes on, more containerised goods are getting involved – mostly on the transpacific trade lane, but also on the transatlantic routes – as the EU and US are far from settling their disputes.

BIMCO expected the fundamental balance to improve in 2018 and higher freight rates across the board as a result of the fleet growing slower than demand; now it seems as if it’s not going to happen. This is partly because of demand growing marginally less than expected, but mostly because of much faster fleet expansion. Having said that, a different ‘distribution’ of demand growth – away from the short intra-regional hauls towards the longer-distance trades – would have meant a better match of newbuild ships and demand growth, and potentially better earnings.

Currently, 2019 is on target for much more manageable fleet growth, that not even a very low level of demolition would be capable of putting off track, unless a sudden rush by shipowners towards the yards emerges. Contracting interest tends to come in waves, and its been low so far in 2018.

Looking at freight rates – and considering both the spot-market rates and the long-term contractual rates (the China Containerized Freight Index, CCFI, does that) – they are mostly under par compared to last year. Using the CCFI as a proxy for industry performance, the composite is down 4% on a year-to-date average compared with the same period last year.

While still at a solid level of 3.8%, global demand is growing more slowly than last year. In combination with a year-to-date fleet growth of 4.4%, a worsening of the fundamental market balance, resulting in lower freight rates, is inevitable.

For the Europe-bound trade, CCFI is down by 4.6%, whereas the US West Coast index fell by 3.8%. On one of the fastest-growing sizeable trades in 2018 (+11.4%), going from the Far East to South and Central America, rates also fell – but by a smaller margin: 1.9%. Capacity had surely been injected beforehand, anticipating a high volume growth. 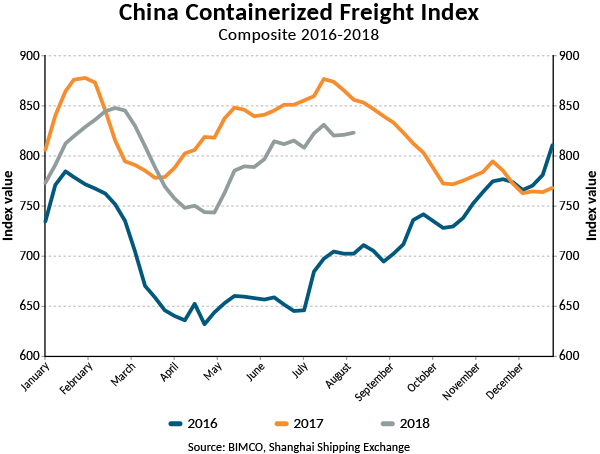 Contact online
BACK TO: Dry Bulk Shipping: An improving market, even as iron ore imports slip and the fleet grows faster. NEXT: Tanker shipping: A record poor tanker market with a growing fleet is prolonging the crisis