Starting a trade war is bad for everyone, and shipping is right in the eye of the storm. Adding a new sanctions regime involving the US and Iran is putting another layer of stress on a shipping industry that is struggling to generate profits. Not surprisingly, the IMF’s estimate for world trade volumes was adjusted downwards for both 2018 and 2019 in July.

Who is really in favour of globalisation at the moment? Shipping surely is, but many of the nations that affect shipping at large, with huge imports and exports of seaborne commodities, find themselves entangled more and more in rolling back free trade – right now, at a particularly high speed. The US is spearheading this development, and trading partners find themselves with no other option but retaliation.

Starting a trade war is bad for everyone, and shipping is right in the eye of the storm. The most recent round of proposed tariffs, BIMCO estimates, will affect as much as 20% of the containerised eastbound transpacific trade, one of the world’s busiest and most important trade lanes. More and more dry bulk commodities are being affected, whereas oil and gas tankers are only affected in a limited way.

By early July, the International Monetary Fund (IMF) kept its headline global gross domestic product (GDP) growth projection unchanged from April, at 3.9% for 2018 and 2019. The projection was made just after the ‘second round’ of tariffs on 6 July. Since then, much more has happened. The speeding trade-war train is moving faster and faster, adding uncertainty to ever more industries, which have to prepare contingency plans for how to handle the uncertainty and subsequent changes to its businesses. In early August, more goods were enrolled in the trade war and long lists of additional proposals were published.

On top of this, a new sanctions regime involving the US and Iran is putting another layer of stress on a shipping industry that is struggling to generate profits.

While keeping the headline unchanged, many smaller adjustments were made to 2018 GDP estimates for major economies, including Latin America, Brazil, Japan and the euro area – all of them going one way: down. It’s not clear from the IMF data where the balancing upgrade is coming from. Not surprisingly, the IMF’s estimate for world trade volumes, especially among advanced economies, was adjusted downwards for both 2018 and 2019 in July.

It’s no secret that many European economies’ industrial production performance peaked last year. Now it seems as if the slowdown in growth has stabilised. The same goes for the EU monthly manufacturing purchasing managers index (PMI); after falling for six months in a row, it went into reverse in July – a sign of stabilising output. Jobs are still being created, although at a slower pace than in 2017.

In July, the IMF revised GDP growth projections down for large economies such as Germany, France and Italy, among others, for business-activity reasons, as well as because of political uncertainty.

The recent Turkish turmoil is unlikely to have much of an economic impact on the euro area. Spanish and French banks are most exposed, but it’s a small share of their assets. Politically, it’s already a murky picture – and one that still holds a downside, mostly.

As 29 March 2019 comes within sight, Brexit is taking up ever more political attention. 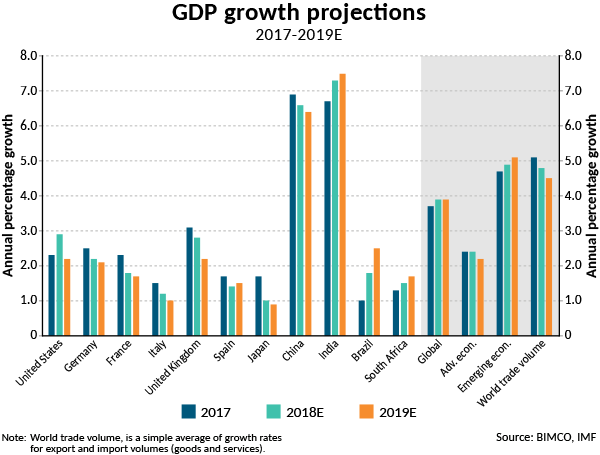 In the lead-up to 4 November, the date when the new US-only sanctions against Iran enter into force, the US is seeking wider support for the initiative. Shipowners and operators are already affected by the sanctions. It’s critical for many operators to be able to call US ports continuously, making them shy away from Iranian business.

In turn, this opens up an emerging and growing market serving Iran and, for example, China for owners and operators that never call at US ports. Other US sanctions against Russia and Turkey are expected to have less of an impact on the shipping industry.

In the midst of the trade war, the ‘advance estimate’ of US second quarter GDP growth came in high, at 4.1% (seasonally adjusted at annual rates), pushed up by personal consumption expenditure on goods, and even more on services.

The final day for hearing comments on the proposed USD 200bn tariff list of imported Chinese goods is 5 September. Implementation of that list is likely to happen in October 2018. BIMCO is keeping a close eye on the developments of the trade war and its impact on shipping via regular updates.

Emerging and developing economies’ share of global GDP is going up constantly. This is largely because of Asian economies such as those within the ASEAN-5 (Indonesia, Malaysia, Philippines, Thailand and Vietnam), which is projected to grow by 5.3% in 2018 and 2019. China and India, the largest of the Asian economies besides Japan, are expected to grow at even faster rates.

Japan is set to return to a low GDP growth level for 2018 and 2019, at around 1%, down from 1.7% in 2017. A slow start to the year has pushed down growth because of weak private consumption and investments. A reversal of these trends and stronger exports are expected to drive the Japanese economy faster in the second half of the year.

South Korea experienced a relatively poor second quarter, as it grew only 0.7% during Q1 (2.9% annualised). Exports, accounting for 43% of GDP, grew by only 0.8% after a jump of 4.4% in Q1. Investments in capital goods and private consumption fell during the second quarter.

As a positive side-effect of the trade war, some of the Asian manufacturing hubs outside China may see their share of extra-Asian exports increase at a faster rate than before. Many semi-finished manufacturing goods are transported around Asia in containers, before being exported overseas. Currently, 25% of global container shipping volume is intra-Asia.

China continues to drive a lot of shipping demand as it develops further. The Chinese economy is still growing quite strongly, but at a slower pace than before. To smooth the way to a lower growth level, the People’s Bank of China has returned to easing monetary, as well as fiscal, policies in 2018.

The trade war is affecting large parts of the shipping industry now. Only crude oil was exempted in a last-minute adjustment by the Chinese authorities. Once pulled off the list, BIMCO does not expect it back.

Most attention is on the US-China trade war, but it’s a global war impacting on many other nations in different ways – and one that also affects the global shipping industry. Domestic steel markets are now being ‘protected’ from imports. Trading partners are having difficulties figuring out how to continue doing business.

Up until now, the impact has mostly been massive uncertainty, added to an increasingly complicated trade environment. But as new tariff regimes are put into force, during the recent and coming months – transport volumes on a larger scale will be involved. Dry bulk and container shipping is at the centre of this.

One of the effects of the trade war may be longer sailing distances for some commodities, while others will experience shorter sailing distances. Overall, however, more expensive goods in general is likely to lead to a decreased demand for them, so shipped volumes could drop. The trade war also presents a risk of slower global economic growth, which will also hurt the shipping business. 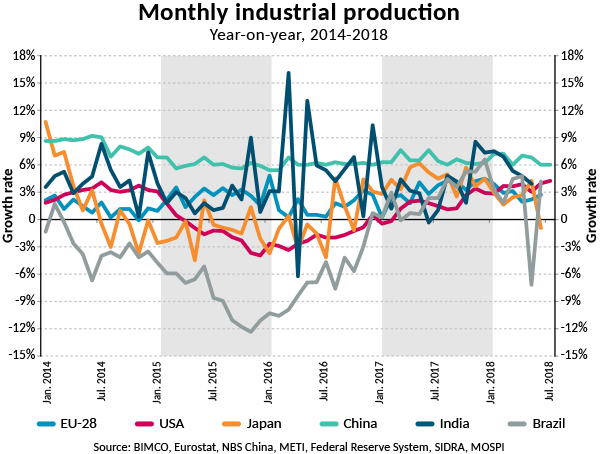 Contact online
BACK TO: Tanker shipping: A record poor tanker market with a growing fleet is prolonging the crisis NEXT: Meet BIMCO’S Chief Shipping Analyst in Hamburg