Tanker shipping: added uncertainty is not helpful to the struggling tankers

The impact of the sanctions against Iran and global stockpile levels are  two factors to watch out for.

Just when you thought it could not get any worse for the tanker shipping industry, the US is re-imposing sanctions on Iran coming into force after a six months wind-down period ending on 4 November 2018. The immediate effects are less tangible but sure to add more uncertainty to the whole shipping industry that has plenty of uncertainty to deal with already. 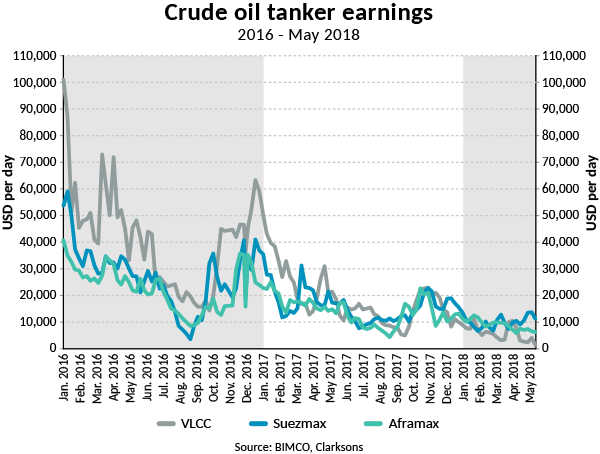 In its April Oil Market Report, the International Energy Agency (IEA) asked whether OPEC could claim “Mission accomplished” shortly, on rebalancing the global oil market after several years of oil supply being significantly higher than oil demand. BIMCO believes that the oil market still has some way to go before being balanced. As highlighted in our most recent tanker shipping report, global oil stocks still appear to be significantly above a “reasonable” target (same stocks/consumption ratio as before the building of stocks).

BIMCO believes that the tanker industry will enjoy a noteworthy higher level of demand when global oil stocks are drawn further down. Moreover, a better oil market balance may also cause a return to an oil price contango (contango is a situation where the future price of a commodity is higher than the spot price). An oil price contango is likely to indicate an increased demand for tankers for floating storage.

March 2018 was the busiest month for crude oil tanker demolition in general and specifically for VLCCs since 2003, with 10 units sold for demolition. Such hefty activity also prompted the crude oil tanker fleet not to grow during the first four and a half months of 2018. 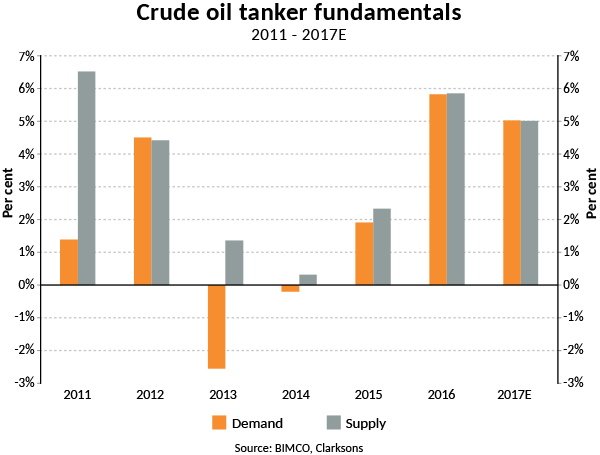 Whereas demolition is affecting the freight market balance right here and right now, ordering of new ships represents an omen of what is to come. Currently it seems that owners and investors who are starving in the freight market have little appetite for ordering new ships for future delivery. Crude oil tanker ordering is up by just 6% to 6.6m DWT (incl. 20 VLCC) during the first four months from a year before, whereas oil product tankers are down by 33% to just 1.4m DWT from a year ago.

Owners and investors have also cooled their interest for second-hand ships, with an average of only six ships changing ownership a month in 2018. This is 50% down on 2017-average monthly Sales and Purchase business. The degradation of the freight market conditions has also meant that less money is spent, even though asset prices have moved up since the low levels of 2017. 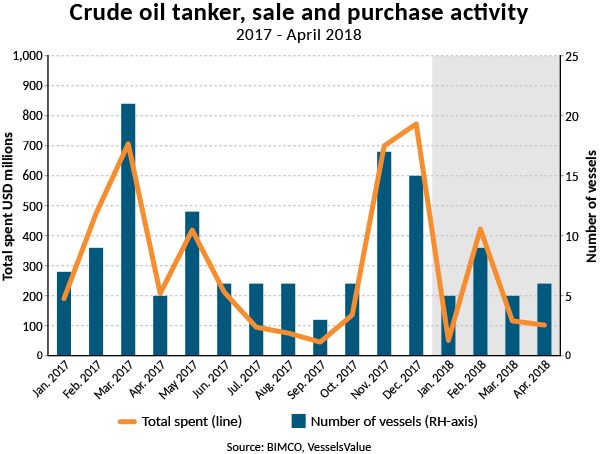 BIMCO revises its previous estimate for crude oil tanker demolition upwards, from 9m DWT to 13m DWT. The immediate effect of this is that our estimated fleet growth for 2018 comes down to 2.0% from 2.7%. During the first four months of 2018, 8.5m DWT of crude oil tanker capacity have been demolished. 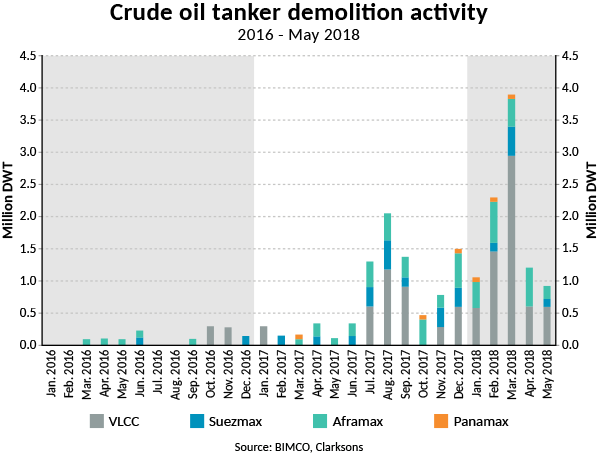 Amongst oil product tanker companies, patience is virtue. The fleet is growing slowly but earnings aren’t improving. Quite a few new orders surfaced in November and December 2017, but interest have cooled somewhat since then. Staying away from the shipyards is essential for reaping the benefit that two years of tepid fleet growth (2018 and 2019 at 2.8% and 2.6% respectively) could bring around in the form of higher freight rates. 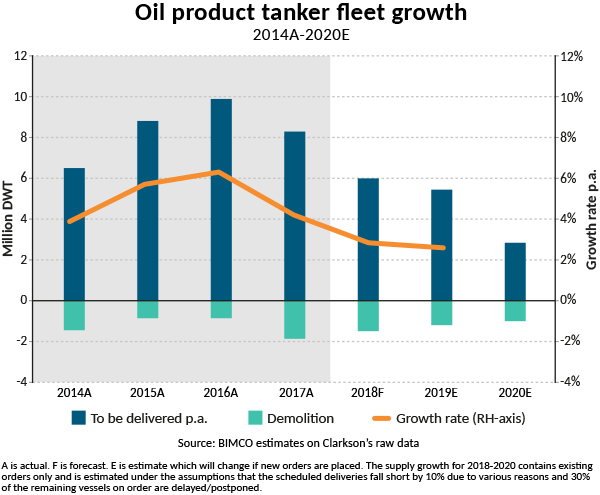 The level of global oil stocks, and not only OECD oil stocks, remains the only factor to watch out for. It is, however, also the one factor we have no hard data for. Nevertheless, indirect measures point to stockpiles still being too high for normal tanker demand to resume.

2018 has seen such a narrow focus on VLCC orderings in the crude oil tanker sector that the obvious question is: how much is too much? The developments in shipping in general and within the oil tanker sector specifically is focused on the larger ship sizes, but it remains important not to prepare too far in advance for what is forecasted to come. The better earnings that should come out of a stronger demand scenario, may end up disappointing if there is large overcapacity.

On another note, the sanctions against Iran have already had an impact on trade. But will we be able to single out the effect of US sanctions against Iran, when they come around? The answer is, “probably not to their full extent”, because the tankers are impacted by so many other factors too – some more potent. For example, the ongoing crisis in Venezuela and Libya limits oil production in both places. Imagine if that situation was reversed? The world would then be awash with oil, something which is likely to keep the oil price in backwardation (a situation where the spot price of oil is higher than the expected future price of oil).

Additionally, more pipelines are built around the world, and they are all equally critical to the oil tankers – as they take seaborne demand away. Amongst the newer pipelines are the Sino-Myanmar pipeline to Kunming, the second Sino-Russian pipeline to Daqing and the East-West Petroline from Arabian Gulf to Yanbu in the Red Sea.

Another trend to keep an eye out for is the extent to which Europe is going to keep imports of oil products high. In recent years we have seen especially Middle Eastern refineries built for exports, with more to come online in the next couple of years. But will those refineries end up producing for domestic purposes?

Contact online
BACK TO: Container shipping: Change required for higher rates NEXT: Macroeconomics: Economic growth likely to peak in 2018