GDP growth and high trade multipliers have benefitted the shipping industry through higher trade volumes, but this could be as good as it gets.

The current global economic growth (GDP) looks like it may be as good as it gets, with indicators across the globe signalling healthy expansion, but at a slower pace compared to the levels seen in the last half of 2017.

Global economic growth seems on track to reach its highest level since 2011, as the International Monetary Fund (IMF) maintain its projection for the world GDP at 3.9% and expects the global economic growth to be supported by a strong momentum, favourable market sentiment and accommodative financial conditions in 2018 and 2019. This is good news for all shipping sectors. Despite the status quo for the overall growth of the global economy, the IMF has lifted its projection for the advanced economies’ output by 0.2 percentage points for 2018 to 2.5%, while maintaining its expectations for 2019 at 2.2%. The development is broad based and driven by the euro area, Japan and expected spill over effects from fiscal policies in the U.S. The continuous strengthening of the advanced economies is beneficial for the shipping industry, more notably the container shipping industry, as growth in advanced economies has the highest impact on trade. (trade-to-GDP multiplier).

The Manufacturing Purchasing Managers Index (PMI) has been highly discussed in the recent months. The PMI development is not only an important indicator for the global economy, but also for the shipping industry. The global Manufacturing PMI signalled a peak in the global business cycle in 2017.

The recent PMI-decline in 2018 - across regions - has already caused anxiety about the recovery’s strength and thereby also introduced a question mark over the current strength of shipping demand. However, it must be emphasized that the current level of the PMI is still above the threshold level of 50, signalling an expansion in the underlying economics. It simply happens at a slightly slower rate compared to 2017. 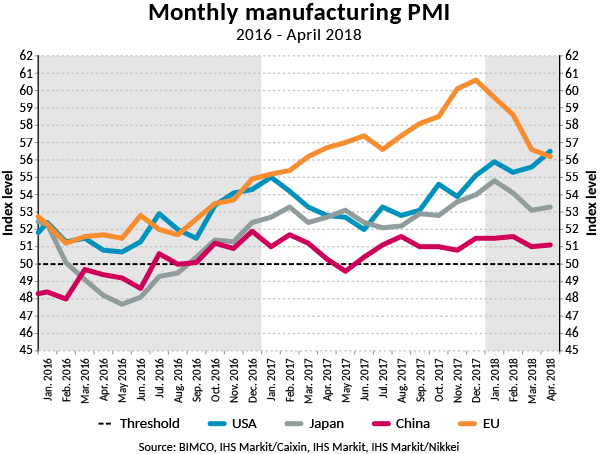 Even though the EU Manufacturing PMI is not continuing at the same strong pace as in 2017, the IMF has increased its expectations for the euro area output by 0.2 percentage points for 2018, now amounting to a growth rate of 2.4%. This is primarily due to a stronger-than-expected domestic demand, supported by monetary policy and improved external demand. The expectations for 2019 remain unchanged at 2.0% for the euro area.

The Manufacturing PMI for Europe reached an eleven-year peak in December 2017 but has lost some tempo in 2018. The current level is however still robust by historic standards and is seen as a moderation of the growth pace, not a setback. The strong growth in 2017 has created short-term capacity constraint’s limiting the economy’s ability to grow at the same expansive rate for a long period and the slower 2018 growth speed can be considered ordinary.

BIMCO’s Market Analysis Team has in recent months focused on how shipping will be affected from a full blown trade war between US and China. With shipping being a demand derived activity, an escalating trade war with many more commodities involved, could trigger something bigger that would negatively impact global shipping in a much wider way including the transpacific container trade. The impact of the trade-restrictive measures enacted to “safeguard” the US steel and aluminium production is still unknown. The US imported 32 million tonnes of the specific tariffed aluminium and steel commodities via the sea in 2017 (Source: US Census Bureau).

For the shipping industry, shipments from Asia are more influential in terms of sailing distance and tonne miles than volumes alone, with 83% of all the tariffed aluminium and steel commodities being imported via the US East – and Gulf Coast.

The EU, Argentina, Australia, Brazil, Canada, Mexico and South Korea have been exempted from the tariffs imposed, and thereby half of US imports of steel and aluminium are exempted. The seven trading partners exported 16 million tonnes of the tariffed steel and aluminium by sea to the US in 2017. 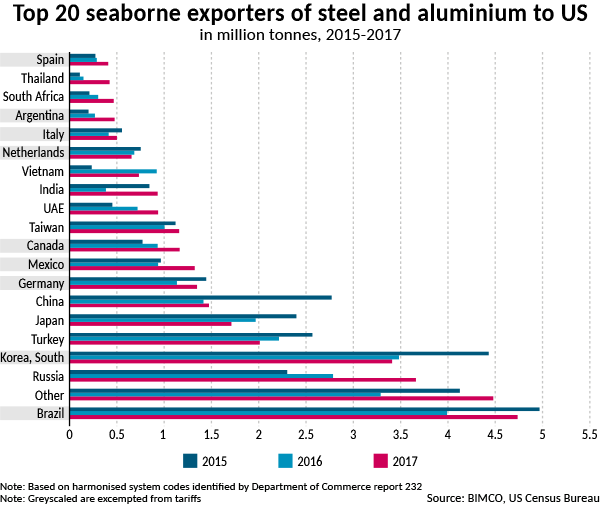 From a wider perspective, and if Chinese retaliations are imposed in response to the first US shot, they may weaken the current global upswing, with US soya bean exports as the other main dry bulk trade that could be affected - for better, if longer sailing distances comes around, or for worse, if cargoes are simply lost.

The IMF published their most recent projections after the Chinese retaliations were introduced. However, they have still increased their expectations for the US output by 0.2 percentage points for 2018 and 2019, amounting to a growth rate of 2.9% in 2018 and 2.7% in 2018.

The Chinese focus on credit tightening and a stronger push for limiting debt burdens is likely to reduce coming infrastructure investments in China (Source: 19th national congress, Reuters, Bloomberg etc). This will weigh on imports of iron ore and coal, as Chinese infrastructural investments are one of the main global dry bulk demand drivers.

After an unstable period in 2016, Japanese PM Shinzo Abe launched an economic stimulus package in August 2016, which stabilized the Japanese economy according to the economic indicators.

The Japanese Manufacturing PMI reached its highest level in 26 years in January 2018 and the industrial production growth has stayed in positive territory. The inflation rate seems finally to have released itself from its usual very marginal increase. Despite the increased inflation, The Bank of Japan has removed the timeframe for achieving its 2% inflation goal mainly due to headwinds from companies resisting raising prices and wages, due to uncertainty over the economic outlook. Higher inflation will spur higher consumer spending and benefit container shipping demand. 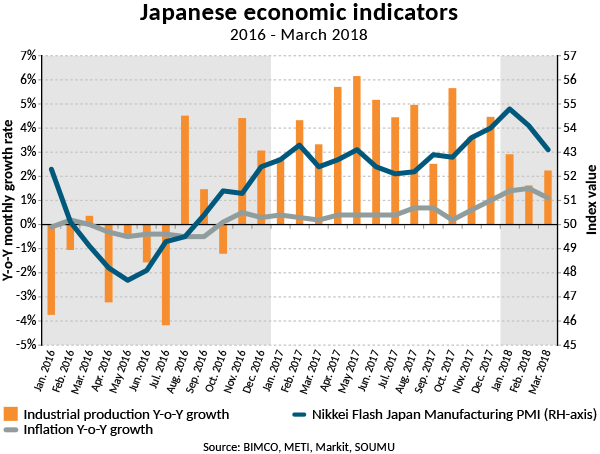 Where to go next? With the IMF’s medium-term growth outlook dropping gradually from 3.9% in 2019 to 3.7% in 2023, policymakers need to enact reforms and build fiscal buffers, which will generate robust and inclusive growth and build resilience to the hazards ahead. 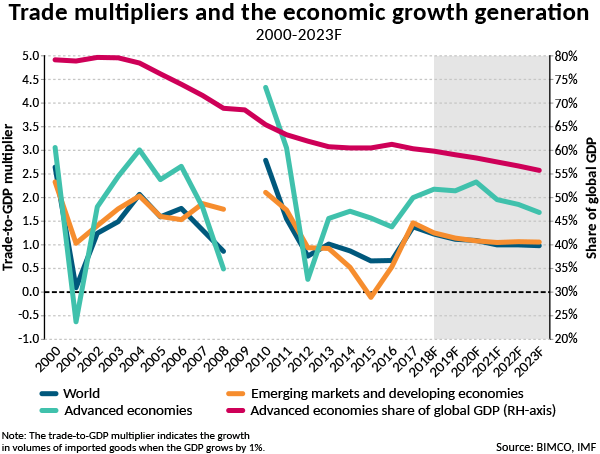 However, going forward as advanced economies are expected to account for a smaller share of global GDP, the world multiplier will start to be more and more influenced by emerging markets and developing economies, which will pull the multiplier towards 1.

If this development materializes the container shipping industry will see slower growth going forward, with demand growing only at the same pace as global GDP, which is a reversal for the industry.

Contact online
BACK TO: Tanker shipping: added uncertainty is not helpful to the struggling tankers NEXT: The trade war is all about the eastbound transpacific trade lane