The shipping of soya beans from the US to China is one of the most significant ‘one commodity’ cargoes that may become affected by the trade war between the US and China.

Soya bean trade lanes will be affected if the Chinese buyers shy away their traditional suppliers because of the extra cost from the proposed tariff on US soya beans. A move that may favour Brazilian ones further, which also hold a higher protein content.

As US soya bean exports are currently out of season, the first indication of the effect will be an indirect one, as the Brazilian soya bean exports’ season is just about to lift off, peaking in May-July.

BIMCO’s Chief Shipping Analyst Peter Sand comments: “The uncertainty in the shipping market has already been felt. Anecdotal evidence of fewer US gulf cargoes heading for China is an indicator of this. Changes in pricing of soya beans is another effect already seen.

In terms of volume, the coming months will show us exactly how much Brazil can further ramp up its exports to China. Brazil is already the leading provider of soya beans to China, but unable to become a full substitute for US exports this year.” 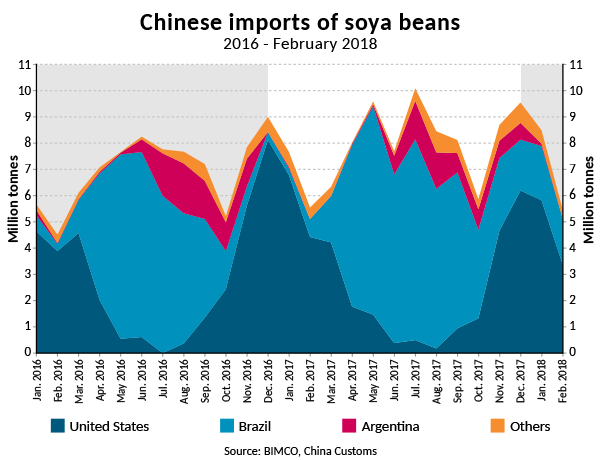 “Clash of the Titans”

In 2017, the dry bulk shipping industry transported 51 million tonnes of soya beans at an approximate distance of 11,000 nautical miles from Brazil to China.

During the same year the US exported 33 million tonnes, as it lost a bit of its share in the Chinese market. China established stricter import standards from 1 January 2018 which started to bite the US during Q4-2017. That also meant that shipping of soya beans between the two countries was down by 18% (2 million tonnes) in first two months of 2018.

Over the past two decades, one nation only, China, has increased its appetite for soya beans to any meaningful extent.

Is it desirable for Brazil to close the Chinese ‘import gap’?

Should China decide to enact the import tariff on US soya beans, the relevant question becomes: To what extent can, and will, Brazil step in to make it up for US exports?

The answer to that is: anywhere between 0% and 82%, probably depending on the price.

Brazil is expected to achieve a harvest that is almost as good as the record seen in the previous marketing year 2016/2017. That means the export potential is just as high, leaving changes to any stock piles out of the equation.

In 2017, Brazil exported 27 million tonnes to other countries than China. In theory, that means Brazil could cover 82% of the imports China used to source from the US. Subsequently, that would require, the US to take over the Brazilian market share anywhere else in the world. We deem that is not a desirable position for the Brazilians to bring themselves into, having one giant costumer only to serve.

Bottomline is that China needs the soya to feed farmed animals: poultry, pigs and fish – which cannot starve because of a trade war. Meat from these animals has grown increasingly popular as the Chinese population has prospered.

Though not preferred by the Chinese importers, taking soya bean meal (soya beans crushed before exports) may serve as an interim substitute to close any ‘import gap’.

Brazilian exports take place throughout the year, but 80% of it is shipped in Panamax and Supramax ships during the months of April through to September. This is an exact opposite to the US exporters who ship 80% of their soya beans from November through March.

“For the shipping industry, traders, exporters and importers this delayed impact gives leeway for them to adjust their business to a ‘new reality’ in due time before the real effects of a trade war involving global shipping of soya beans is felt.

Let’s hope that it will not be carried out, as a trade war is harmful to everyone”, Peter Sand concludes.