US seaborne exports of oil products at an all-time high

Following a seasonal surge in December 2017, the US seaborne export of oil products (materials derived from crude oil) reached the highest annual level ever, in terms of volume and tonne miles demand. An increase in volume, combined with a marginal increase in the average sailing distance, caused the total annual tonne miles demand to surpass the previous high set in 2013.

BIMCO’s Chief Shipping Analyst Peter Sand comments: “The development in US seaborne exports of oil products during the last 10 years have been highly beneficial for the oil product tanker shipping industry, as a larger share of the total US oil products is transported via the sea. Since 2010 the volumes have tripled and now amounts to 10% of the world seaborne oil product trade”. 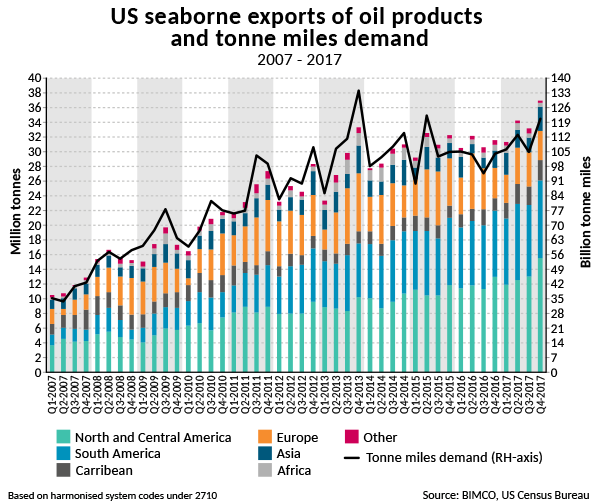 Peter Sand adds:” The recent development in exported oil products from the US provides the oil product tanker shipping industry with steady growth in volumes and yet again growth in tonne miles demand. Overall, we see oil product tankers operating in an improving market in 2018, with better market fundamentals for both demand and supply.

Still, the oil product tanker sector may only break-even in 2018, if demand growth is low throughout the year”.

Both average sailing distance and volumes increased in 2017

The volume of seaborne exports of US oil products has increased every year since 2007 except for 2016, which was marginally down from the previous year.

BIMCO’s Chief Shipping Analyst comments: “By exporting more to countries with closer geographical proximity, the additional exports of oil products do not benefit the tanker shipping industry as much as the increase in US exports of crude oil does. For the US seaborne exports of crude oil the average sailing distance grew by 65% and the volumes grew 151% for the first 10 months of 2017 compared to same period in 2016”.

15 of the top 20 importers are from the Americas

With 15 out of the top 20 importers based in the Americas, 76% of all oil products exported via the sea are bound for destinations on the American continent, which is underlined by the short average sailing distance of 3,270 nautical miles. 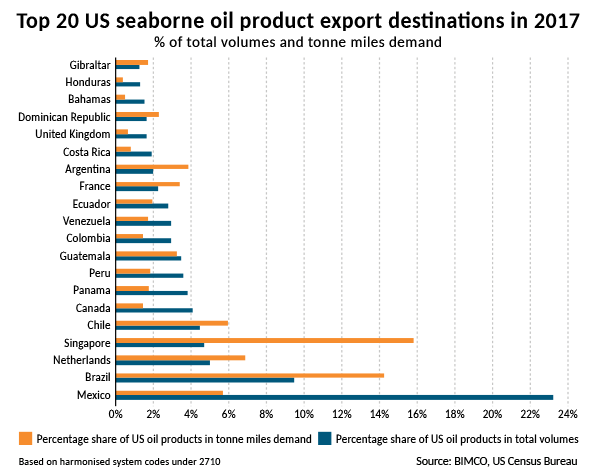 Mexico’s share of the imports benefits the oil product tanker shipping industry to a limited degree. Mexico imports 23% of all US seaborne exports of oil products, however it only generates 5.7% of the total tonne miles.

Singapore, the top 20 importer with the furthest sailing distance from US ports exporting oil products, generates 15.8% of the total tonne miles, despite only importing 4.7% of all US seaborne exports of oil products.

The Gulf Coast exports 80% of all seaborne oil products

Ports based in Texas and Louisiana on the US Gulf Coast, are responsible for 80% of all seaborne oil products exported in 2017. This level s remained close to the average in 2016 and 2015, where the level was 79% for both years.

Contact online
BACK TO: A trade war is harmful to us all and clearly bad for global shipping NEXT: Meet BIMCO’s Chief Shipping Analyst in Singapore