Imports of crude oil and coal have benefitted the shipping industry to the greatest extent as both volumes and distances have increased. 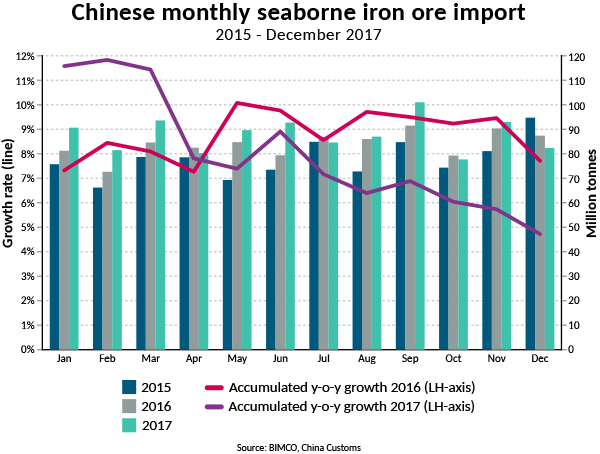 BIMCO’s Chief Shipping Analyst Peter Sand comments: “Chinese imports of iron ore have been a reliable key driver in this decade of dry bulk shipping demand growth. Not only is China repeatedly importing larger volumes, it is also sourcing most of its imported iron ore from seaborne exporters with more than 98% of the imports arriving via the sea”.

Chinese seaborne coal imports have once again provided strong support to dry bulk shipping demand by increasing 12% in 2017, compared to 2016. In 2017 China imported a total of 228.5 million tonnes of coal via the sea compared to 204 million tonnes in 2016. China sourced 84% of all its imported coal from seaborne exporters which, compared to 80% in 2016, indicates that China is not only importing larger volumes but also substituting landborne coal with coal from seaborne exporters.

The biggest exporters of coal to China are Indonesia, Australia and Mongolia, exporting 40%, 30% and 13% respectively. The rise of US exports of coal to China is largely beneficial for the dry bulk shipping industry. The 3.1 million tonnes of coal exported from the US to China in 2017, ties tonnage on long sailing distances and thereby generates high tonne-mile demand. 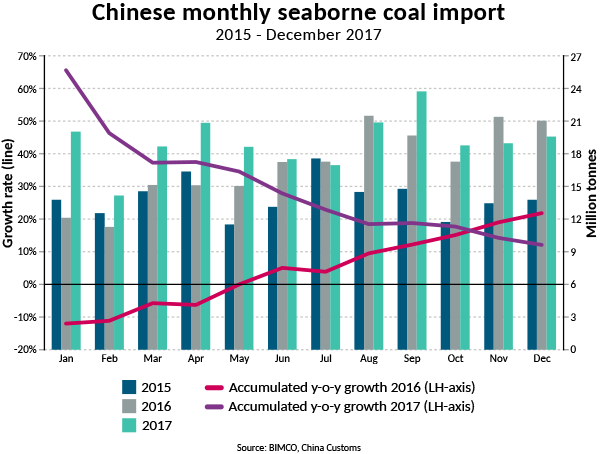 BIMCO’s Chief Shipping Analyst Peter Sand comments: “The fact that Chinese imports of seaborne coal continued the growing trend seen in the second half of 2016 into 2017, provided strong support to the  generally improved demand conditions in the dry bulk shipping industry.

The import of US coal is highly beneficial to the dry bulk shipping industry as it has a strong multiplying effect on demand, as it provides some of the longest possible distances. Chinese importers accept a journey of up to 45 sailing days when they import coal from Norfolk, Virginia and Baltimore, Maryland”.

Chinese imports of crude oil increases in volume and distance 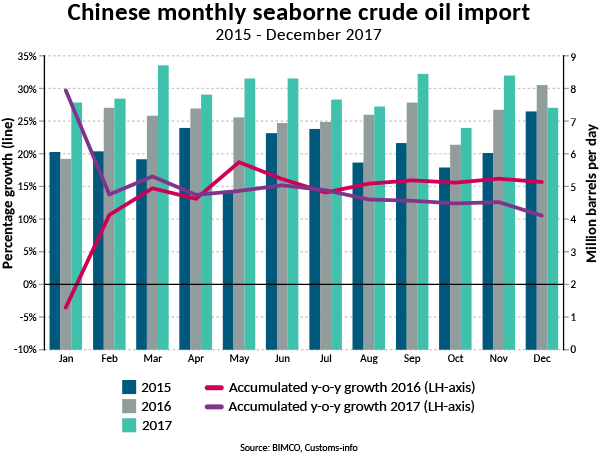 Thereby, the crude oil tanker shipping industry is experiencing the rise in Chinese crude oil demand to the greatest extent, with the growth coming primarily from exporters in Angola, Brazil and the US”.

Peter Sand ends:” Tanker demand growth in 2018 is expected to continue the trend seen in 2017, with growing imports in the Far East, and growing exports from the US.  This is expected to benefit the VLCC segment the most”.