This ongoing recovery is still in a "fragile" state - demand has increased but so has supply.

Even without much support from Brazilian iron ore exports during August, capesize rates went from $10,000 to $17,000 per day. In September, those gains were retained until Chinese Golden Week in early October reduced trip chartering interest, dampened demand and lowered the freight rates. Not dramatically, but noticeably. 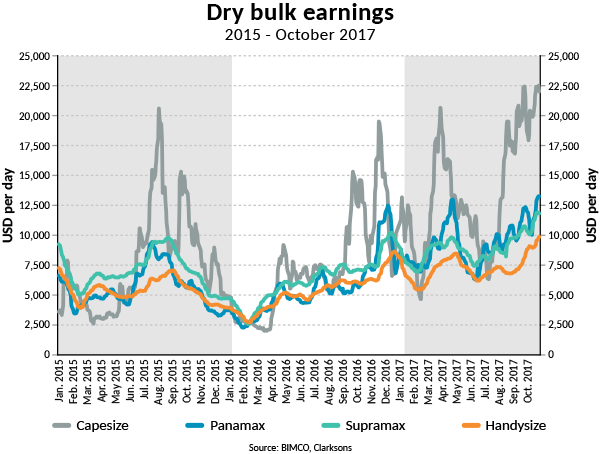 Handymax/supramax/ultramax owners and operators who fixed their ships after 21 August, have also seen freight rates covering, not just operational expenditures (OPEX) but also capital expenditures (CAPEX), leaving a slim return on investment. This has only happened three times- for more than two days in a row – in the past two years. Finally, the handysize segment has, for the first time since April 2014, reached a freight rate level above $9,000 per day.

This ongoing recovery is still in a “fragile” state - demand has increased but so has supply. This means only a slight fundamental market improvement. The return to permanent profitable freight rates is still way off. The transport demand for dry bulk cargoes in Q1-2018 is considerably lower than the volumes transported in Q4-2017, and that’s the first hurdle to cross. Maintaining slow steaming is another prerequisite to hold onto the gains that have been achieved.

Setting a new world record in steel production for the month of August of 74.6m tonnes, resulted in total growth of 5.6% for eight months’ production in 2017, compared with the same period last year.

Another record was reached in September, when Chinese iron ore imports exceeded 100m tonnes for the first time.

While this is much needed by the dry bulk shipping industry to get out of the doldrums of recent years, there may be a limit as to how far this can go. Imagine if steel production stalls, then iron ore imports are likely only to grow at the expense of domestically mined ore.

BIMCO calculates that substitution of low-quality, domestically mined iron ore in China, for imported high-quality iron ore from Brazil or Australia, would have increased imports by 17m tonnes per month in the first eight months of 2017.

Regardless of recent reports, about one in three Chinese iron ore mines being at risk of losing their mining licenses due to environmental issues, the output from Chinese iron ore mines is still up by 5% in the first eight months, year-on-year. One of the key risk elements in the equation is actual steel consumption in China.

In addition to the strong growth that we have seen into China, US coal exports have certainly added to the panamax and capesize demand in the Atlantic since Q4 2016.

From November 2016 to July 2017, we have seen a monthly average of 6.4m tonnes of coal being exported from the US to a vast number of destinations like Japan, Egypt, Turkey, South Korea, China, Guatemala, India, Spain and Morocco. This is up by 61% versus the same nine months of the year before. Key export ports, mostly on the Atlantic side, are Hampton Roads and Baltimore, where panamax and capesize ships are used to export 60% of the total volume. In the US Gulf, Mobile dominates exports with shipments of coal in panamax. On the Pacific side, US coal exports are handled via Vancouver.

The total tonne miles adjusted demand growth rate in 2017, is forecast to be 3.9%, the highest in three years.

The delivery pace has reduced significantly since H1-2017, but so has demolition activity. During H1-2017, 28m DWT was delivered, while 8.5m DWT was demolished. Whereas Q3-2017 has seen only 6m DWT delivered, and 3.6m DWT permanently leaving the active fleet.

Demolition of handymax tonnage, has been dominant this year – a natural reaction from owners operating in that segment, which has seen fleet growth around 5% pa for some time now, clearly outpacing all the other dry bulk segments. 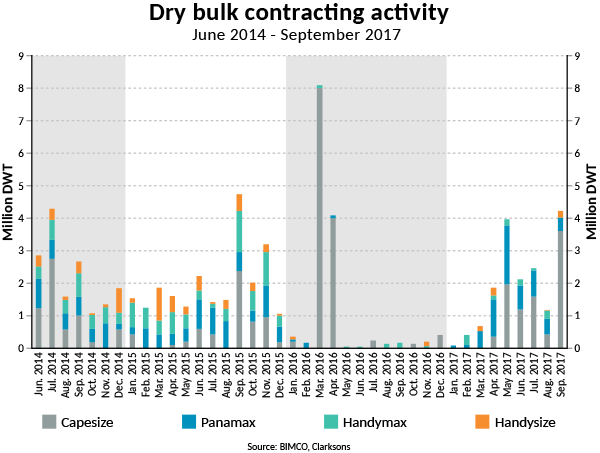 Contracting activity for the year so far, has as expected, gone up from the extraordinarily low levels that we experienced in 2016. While Q1 2017 was still quiet in terms of actual orders, newbuild interest was growing in the background. The larger segments are popular. Panamax and very large ore carriers (VLOC) account for 15 out of the 17m DWT ordered in total, year- to- date (until 2 October). It’s worth noting that many of the VLOCs have been ordered against a long-term charter, most likely replacing existing long-term chartered VLOCs when they are retired. Later in October, another 5 VLOCs were ordered.

For the first nine months of the year, the dry bulk fleet has grown by 2.7%, already a three-year high. BIMCO expects the fleet will end up growing by 3.1% to 16m DWT as demolition expectations are lower than the previously anticipated 19m DWT. 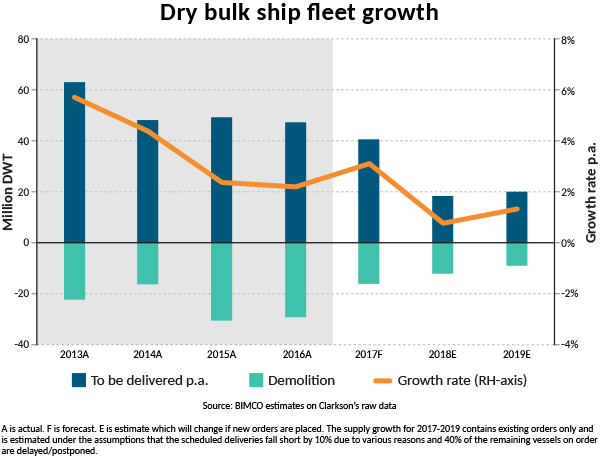 In the future, expected fleet growth remains quite low based on the ships on order now – and does not include orders not yet placed. 2018 could see the fleet grow by less than 1%.

Should we look no further than China when it comes to dry bulk market demand? No, is the short answer - at least not in relation to steel production ingredients - iron ore and coking coal. In 2008, global iron ore imports were at 841m tonnes, out of which China took 436m tonnes (52%). In 2017, the global seaborne market is at 1,478m tonnes, out of which China takes 1,075m tonnes (73%).

For thermal coal, a few other nations are worth taking note of, in addition to China. Those are India, South Korea and Malaysia. Additionally, the US seems to have re-established itself as an option in the seaborne coking coal market, providing long distance voyages into Asia.

Ever since the outbreak of the global financial crisis in 2008, the dry bulk market has only had one growth area: Asia. All other regions of the world contribute with steady or declining imports.

Note that European imports of:

For the current time and Q4 2017, selected seaborne trades from major exporters including iron ore, coal, grains, soya and steel products are expected to grow by 3.4% from Q3 2017 (source: SSY). Whereas, grain peaks in Q1 and Q3, and soya in Q2, the seaborne trading of steel products, coking coal, thermal coal and iron ore will all peak in Q4.

After a bit of a downturn in the market during the first half of October (which was expected), demand lifted freight rates again. It’s time to make the most of it, before seasonal low demand in Q1-2018 get the upper hand and push freight rates down.

Contact online
BACK TO: Macroeconomics: a "new normal" gives the global shipping industry a better outlook for growth NEXT: Container shipping: testing the strength of the market makes spot rates drop