Tanker shipping: Shipowners have their work cut out handling the supply side in 2017

Oil tankers experienced a tough start to 2017 as freight rates for all crude oil and oil product tankers continued their decline following the brief lift at year-end. For one, VLCCs may not yet have bottomed out. By 7 April 2017, average earnings stood at USD 18,853 per day, down from USD 63,284 per day on 16 December 2016.
Demand
The demand situation for both crude oil tankers and oil product tankers in 2017 and 2018 is closely connected to the destiny of worldwide oil stocks. So far, we have seen supply cuts from OPEC, from their highest supply level ever at 33.9 mb/d in October 2016. However, we have also seen an increase of supply from the US. This has lifted US crude oil stocks to their highest level ever, and global stocks have sidestepped.

BIMCO believes that we must wait until the second half of 2017, when global oil demand picks up, to see an eventual drop in global oil stocks (crude oil and oil products).

Focusing on the oil product tankers only, the month of March proved to be a relief. Handysize tanker earnings even surpassed that of all crude oil tankers, reaching USD 23,984 per day on 24 March. On that day, suezmax crude oil tankers reached only USD 22,700 per day. 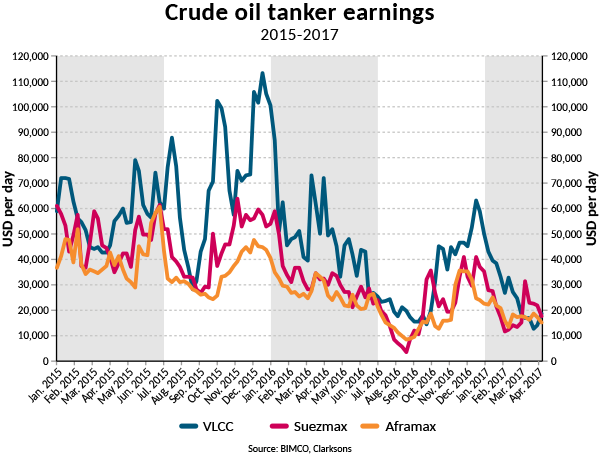 Since the removal of restrictions on US crude oil exports in December 2015, this has been a developing story. It has also been an interesting one, as shipping has certainly benefited strongly and quickly. Not so much in sheer volumes, as US crude oil exports went from 465,000 barrels per day (b/d) to 520,000 b/d (+11.8%), but exports started to find destinations globally and not just cross-border into Canada. In 2015, 92% of US exports went north; in 2016 that share was just 61%. The other destinations that we find in the top five include the Netherlands, Italy and China. South Korea, Japan and the UK are also amongst the importers – all served by tankers. US crude oil imports have also grown, benefiting crude oil tankers even more. 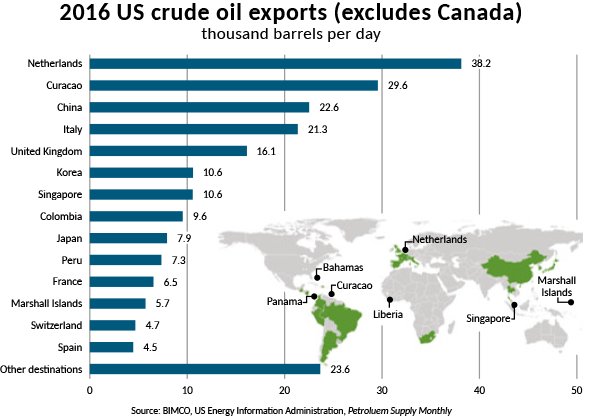 Additionally, US oil product exports keep rising, going both short-haul to Mexico, Caribs and South America and long-haul to Japan, China and India.

Supply:
As discussed in our previous tanker shipping market overview and outlook, the total amount of demolished tanker capacity was very low in 2016. Owners appeared more focused on taking delivery of new ships during this time.

This has now changed – at least to some extent. In 2016, 2.6 million DWT was sold for demolition. By end-March 2017, 0.9 million had left the fleet for recycling at shipbreaking facilities. Although slightly busier than 2016, it has been a slow start to what BIMCO expects will be a busy year for tanker demolition.

As we expect the freight market and asset values to have yet another year under pressure. Demolitions are forecast to rise fourfold to a total level of 11.5 million DWT, out of which 9 million DWT is expected to be taken out of the crude oil tanker fleet.

BIMCO forecasts crude oil tanker deliveries in 2017 to be on a par with 2016, which saw 23 million DWT of new shipping capacity. This highlights the need to handle the supply side, as demand growth will not support the market to the extent it did in 2016. The year to date has seen
9.8 million DWT being delivered with just 0.7 million DWT of crude oil tanker capacity being demolished – including one VLCC.

In terms of new orders, 2017 has seen 12 VLCCs and 8 LR2s amongst others. There have been 38 new orders in total for 5.7 million DWT, including 16 product tankers with a total capacity of 1.3 million DWT. The 12 VLCCs and other orders resulted in a rise in the crude oil tanker order book during the past two months. This is quite amazing considering the present challenges in the market.

As touched upon in a regular BIMCO news piece, a record 12 VLCCs were delivered in January. This inflow brought the VLCC fleet above 700 ships. 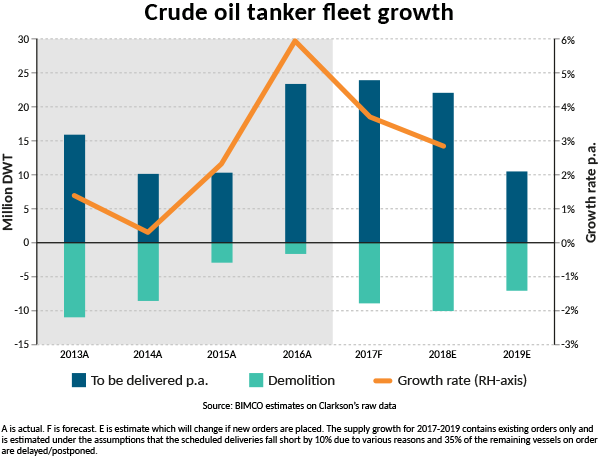 Outlook
As cargo volumes are not expected to grow that much in 2017, the increase in demand (if any) must come from longer sailing distances, and changes to the volumes from one country to the next.

China rules the crude oil tanker market, as in many other shipping markets, having been solely responsible for the incremental crude oil tonne mile demand growth since 2010. The country is set to do it again in 2017. What we have seen so far in terms of Chinese car sales, is supporting this. Though the subsidy has been reduced in 2017, the numbers are holding up.

The US could spoil the party, however. As discussed above, US imports and domestic production have both contributed to rising crude oil stocks. A continuance of that could prove difficult to uphold. 2016 was an abrupt break of trend that has seen US seaborne crude oil imports drop consistently since their peak in 2005.

2017 is proving to be a year of change for oil tankers, as was indicated during 2016 with freight rates coming down. After two years of solid demand growth, 2017 is a year of tepid demand growth around 0–2%. As fleet expansion is also slowing down, though still at a higher growth rate than demand, the shipowners have their work cut out.

Managing the supply side is essential to ease the pain and avoid a marked dip in the fundamental balance that would take years to overcome.

In May, BIMCO extends the series of analysis on the “Road to Recovery” for the shipping markets by looking at the crude oil tanker sector.

Contact online
BACK TO: Upbeat crude oil tanker demolition goes against general trend NEXT: Macro economics: Economic indicators have been pointing up in recent months