Macro economics: Economic indicators have been pointing up in recent months

The recent months’ uptick in global indicators, which implies a strengthening in the global economy, is not sufficient for the patient to be discharged yet. The state of the global economy is still uncertain, despite stronger growth dynamics in advanced economies, and not least in China.

When the IMF updated its outlook for advanced economies for 2017 and 2018 in January, it was the first time since 2007 that an IMF January update lifted expectations for the present and coming years. This shows a growing confidence in the economy and may break the past years’ trend of constantly downgrading the GDP growth rate forecast, pending the IMF’s next update in mid-April.

The inflation rates for the EU, China and the US have recovered and reached the highest levels for several years; however, much of this has been due to the increase in commodity prices. The core inflation rates - which exclude food items and energy products - have remained at very low levels and generally below inflation targets.

Since the mid-March US interest rate hike, which took the base rate from 0.75% to 1%, there has been an increasing expectation that other central banks will follow. However, it is vital for the timing of interest rate hikes that they are not implemented too early, as this may shock a growing economy and cause deflation if labour is still abundant and wage pressure is muted, as is the case in many countries around the world.

US
Since the US election in November 2016, there has been a steepening of the US yield curve that mirrors anticipation of more positive economic news. Additionally, we have seen a rise in the equity prices and a sizable appreciation of the US dollar. Together with the unemployment rate dropping to 4.7% in February and wages growing by 2.8%, US consumer confidence has continued to surge, and in February 2017 reached the highest level since July 2001.

The growing consumer confidence in the US is further emphasised by “US housing permits”, which in January 2017 reached the second-highest level since August 2007. Furthermore, “US housing starts” in Q4-2016 recorded the highest quarterly number since Q3-2007. “US housing starts” is a clear stimulant for containerised goods in the US, and a continuous increase will be of great importance to the demand side of the container shipping industry. 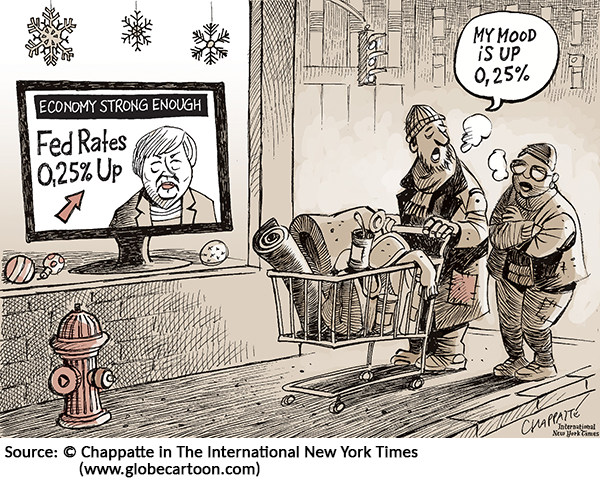 Europe
Following the UK’s passing of the EU Withdrawal Bill, and its handing in of the official notice under Article 50 to the president of the European Council on 29 March 2017, the EU and the UK must now focus their combined efforts on a smooth separation. A clear plan is needed: one that limits the potential negative effects of economic, political and institutional uncertainty to do the least amount of damage to global trade.

In the wake of the US interest rate hike, there has been a focus on the European Central Bank (ECB), questioning if they would follow the US lead. However, it must be emphasised that a premature increase in interest rates may be counterproductive, and the ECB first needs to focus on normalising its expansive monetary policy. Remember, that the interest rate hike back in 2011 proved to be premature as it led to a ‘double dip’ recession.

The economic growth currently experienced in the Eurozone, with PMIs (Purchasing Managers indexes) and inflation going up, signals that the ECB may scale back its bond-buying scheme and thereby take a step away from exceptional monetary policies.

Fortunately, limited inflationary pressure in the Eurozone gives the ECB pause for thought, as core inflation (the measurement that excludes fuel and food prices) has not changed significantly since May 2015 and remains low at around 0.9%.

On the political side, the election in the Netherlands reduced the political uncertainty temporarily. Next in line are France and Germany. Even with long and strong public support for inward-looking policies, the election in the Netherlands did not support the growing sentiment for ‘Globalisation of Nationalism’, as pro-EU parties experienced strong support.

Asia
Although it seems like China’s GDP growth has settled at around 6-7%, there is still a risk of a further slowdown or disruptive adjustments. This is due to the continued reliance on policy stimulus measures, a slow development in addressing corporate debt and a rapid credit expansion.

Chinese economic activity bottomed out in 2015, as it grew by only 4%, if measured by standards other than the official GDP- like the ‘Li Keqiang’ index or the Manufacturing PMI. The two indexes also agree on the 2016 rebound. The official GDP growth rate appears not to show the full picture of the development in the Chinese economy. 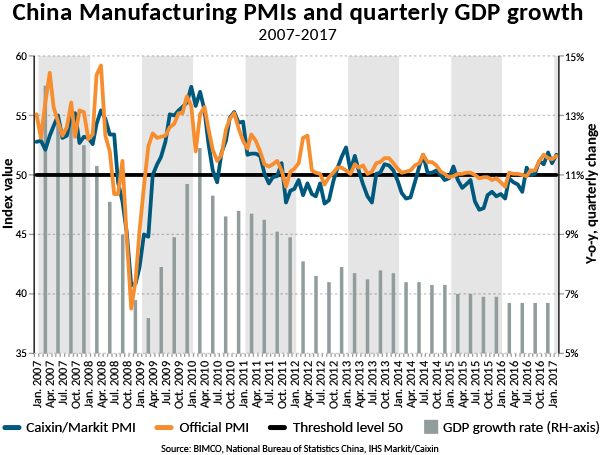 The increase in manufacturing PMI has been driven by a strengthening in foreign demand, as new export orders in February 2017 surged to their highest level since July 2014. It is essential for the shipping industry that foreign demand remains high, as this is a direct indicator of the external demand for manufactured Chinese goods.

The Japanese PM Shinzō Abe, launched the economic stimulus package in August 2016 to stop further deceleration of the economic growth, and it seems like the Japanese economy has now stabilised. General indicators such as industrial production, inflation and PMI surged during the second half of 2016, and all achieved levels that point towards continuous economic growth.
Japan’s manufacturing PMI rose to 53.3 in February 2017, hitting a 35-month high. 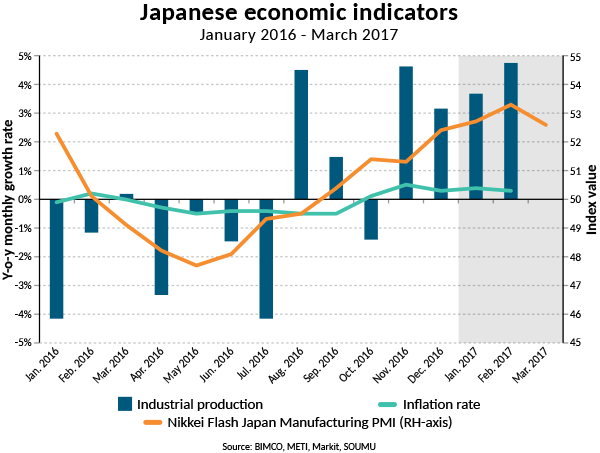 Outlook
Economic indicators suggest the global economy is in better shape today than in 2016. However, the uptick in inflation is still short term, and the risk of deflation remains due to persistent overcapacity in many sectors of the economy. The monetary policy must therefore remain accommodating, with fiscal support focused on lifting medium-term growth prospects.

It is vital that the uptick doesn’t lull policymakers into a false sense of security, as comprehensive and coordinated action is still required in support of the current positive economic development.

Despite growing public support for protectionism in several large advanced economies, the WTO’s Trade Facilitation Agreement (TFA) entered into force in February 2017. This is essential to cross-border economic integration and may encourage new trade flows and facilitate trade to and from emerging economies. Agreements like this are vital for the wider shipping industry.

The EU and Japan have stepped up their efforts to reach a free-trade agreement after meeting in March 2017. Jean-Claude Juncker, President of the European Commission, is very confident of a swift agreement this year and indicates that the negotiations with Japan are at a decisive and final stage. Removing trade tariffs and implementing duty-free access to each individual market are essential to spur trade.

Growing trade between the EU and Japan would be of high importance to the shipping industry, due to the significant tonne miles, improving utilisation. As countries embracing protectionist measures are leaving trade deals, the EU are welcoming and finalising them.

Contact online
BACK TO: Tanker shipping: Shipowners have their work cut out handling the supply side in 2017 NEXT: Dry bulk shipping: as the BDI moves higher, demolition activity weakens