The growth rate of Chinese imported iron ore in 2016 was constant throughout the year, as the annual volume broke into landmark territory. Both the total iron ore import and total seaborne iron ore import volumes for 2016 exceeded 1 billion tonnes for the first time ever.

Clouds on the horizon
BIMCO’s Chief Shipping Analyst Peter Sand says: “Despite a growth of 7.5% in total imported iron ore for 2016, the growth in Chinese steel production remained limited at 1.2%.

The Chinese demand for steel grew by 1.4%, which has increasingly been from construction and increased public spending on physical infrastructure works”.

Thereby, China has imported more iron ore via sea in 2016 compared to 2015 and less iron ore via inland transportation in the same period. This is the best possible scenario for the dry bulk shipping industry, as land borne sources are being substituted for seaborne providers. 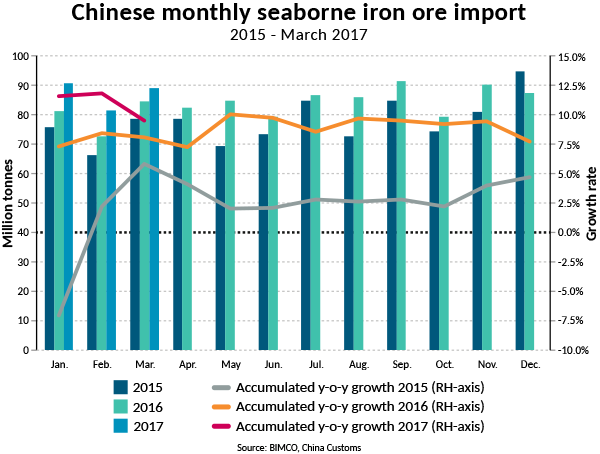 Brazil being more influential is a substantial benefit to the dry bulk shipping industry, as the Brazil-China route is the longest iron ore voyage and ties up tonnage for a longer time. An 8.5% growth in tonne-miles according to BIMCOS’s own calculation of Chinese iron ore imports further emphasises, that China is sourcing their iron ore imports from farther distanced origins in 2016 compared to 2015.

Contact online
BACK TO: Container shipping: New networks come into focus as the supply side holds the key to improvements NEXT: Meet BIMCO’s Chief Shipping Analyst at Dry Cargo Conference 2017 - POSTPONED to 2018 -