The dry bulk fleet exceeded 800 mill DWT in January 2017, as the dry bulk fleet grew by 2.6% year on year.
BIMCO’s Chief Shipping Analyst Peter Sand expects the dry bulk fleet to grow 1.6% for the full year in 2017, if the projected demolition activity of 19 mill DWT is realised.
The declining growth rate from the panamax, supramax and handysize segments was absorbed by a growing capesize fleet; the total fleet growth was stable in 2016.

As the dry bulk fleet grew by 2.6% year on year in January 2017 it exceeded 800 mill DWT. This was due to dry bulk demolition being half of what is was in January 2016, while total dry bulk deliveries reached its highest level since January 2013.

In February 2017, fleet growth reached 2.8%. If the fleet growth remains above 2%, the dry bulk shipping industry cannot rely on global demand to cure the oversupply caused by this fundamental imbalance in the market. Therefore, industry actions, such as demolition, need to get back to the activity levels seen in the first half of 2016, where demolition figures balanced out close to 80% of the inflow of new dry bulk ships to the market. 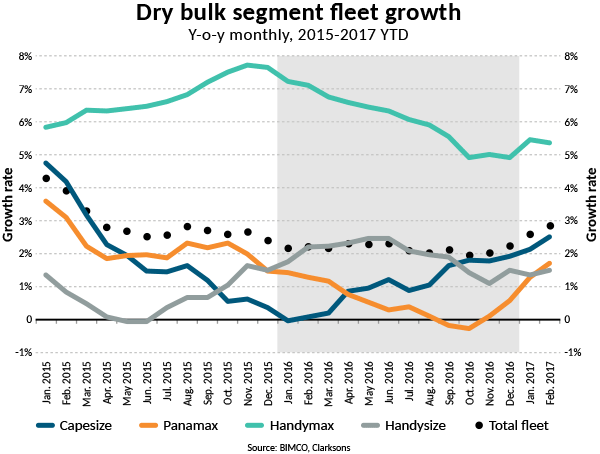 We expect to see an increase in the fleet across the board for dry bulk shipping in the first quarter of 2017, in part because this is always the quarter with the most deliveries of newbuilt ships.

The continued slowdown in scrapping and the lower level of demand in Q1, means that the supply side growth will exceed the growth in demand on a short-term basis and lead to lower dry bulk earnings in that given period.

Despite an uneasy start to 2017, fleet growth will start to stagnate and BIMCO expects to see a supply growth of 1.6% for the whole of 2017.

BIMCO expects 19 mill DWT to be scrapped in 2017, which is lower than the previous two years of demolition activity - around 30 mill DWT annually. With BIMCO’s “Road to Recovery” update due for publication mid-March, a revised projection of when the industry will turn profitable again, will be reviewed.

The panamax segment experienced a stall in fleet growth in the first three quarters of 2016, which led to a decrease in the growth rate. As H2 2016 delivered the lowest number of panamax bulkers in seven years, the demolition activity also stalled and the year on year fleet growth went from -0.3% in October 2016 to 1.7% in February 2017.

The handymax achieved the largest drop in fleet growth rates of all four segments, as it decreased from 7.2% in January 2016 to 4.9% in October 2016. However, it is still the highest fleet growth rate across all dry bulk segments, but shows an increasing willingness towards scrapping, as 4.3 mill DWT of demolished handymax tonnage in 2016 was the second highest ever.

What to watch out for

As the capesize segment represents 40% of the total dry bulk fleet (measured in DWT), it represents the biggest share of the four ship types in DWT and is thereby also the main driver for total fleet growth. This is highlighted by total fleet growth stabilising around 2% during 2016, as the declining growth rates from panamax, handymax and handysize were absorbed by a growing capesize fleet.