On an unprecedented scale, 5.5m DWT of crude oil tanker capacity (up 220% from January 2016), has already been delivered in 2017(according to preliminary data from VesselsValue.com). January 2017 accounts for 22% of the crude oil tankers previous year’s total deliveries. In comparison to the totals of 2015 and 2014, this 2017 figure amounts to 48% and 51%, respectively.

January 2016, in terms of crude oil tanker deliveries of 2.5m DWT, hit record levels in relation to the previous two years. However, that level has been dwarfed by the tremendous amount of deliveries in January 2017. 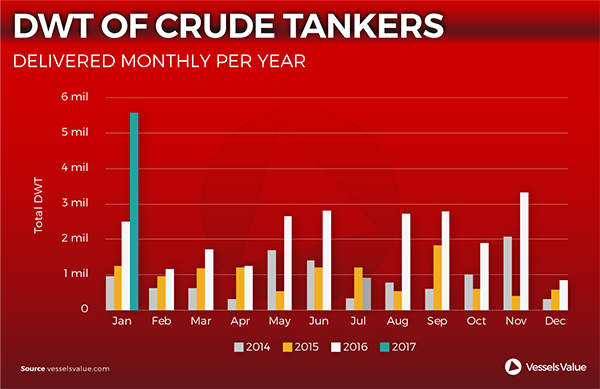 This record-high crude oil tanker delivery growth is troubling, and worsens the balance between supply and demand, due to sluggish demolition in this segment.

From January 2014 until January 2017, demolition amounts to only 8m DWT, which represents an astonishingly small proportion of 2.2% of the current crude oil tanker fleet.

This development in January highlights the fact that the crude oil tanker market faces headwind for the current year already. 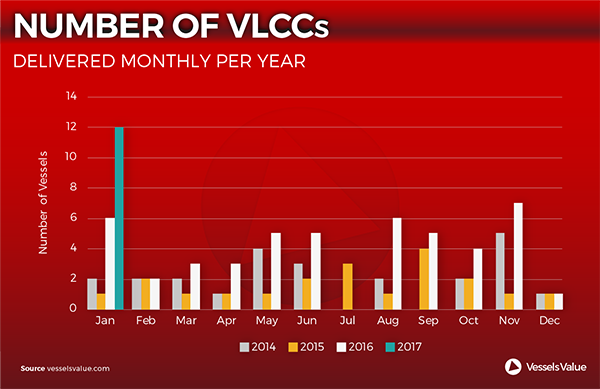 Showing leadership to the global shipping industry, in 2017 BIMCO will continue its unique series of analysis on the “Road to Recovery” for the crude oil tanker market.

Contact online
BACK TO: Dry bulk fleet exceeds 800 mill DWT as supply surges NEXT: Tanker shipping: A strong season lifts crude oil tankers before it is expected to hit the fan in 2017