Update on the “road to recovery" for the dry bulk market: improvement on the demand side only but the supply side is worse off

Back in May, BIMCO disclosed a projected “road to recovery” for the dry bulk shipping industry. The main message back then on what the dry bulk sector must do to return to profitability was, and still is: “Scrapping ships and no new builds is the fastest road to recovery for the dry bulk market”.
As promised, BIMCO will monitor and report back to the dry bulk shipping industry on the progress made towards a recovery. 2016 must be the turning point in addressing the fundamental imbalance of the dry bulk market. Despite better demand side conditions recently, we cannot expect positive demand side surprises, coming to rescue eternally. The enormous overcapacity of ships must be addressed – starting now – and continued over the next three years at least.

Strong demand side growth helps as demolition interest has cooled

As shipowners’ interest in demolition has cooled, the supply side is worse off today than earlier estimates projected for 2016. Stronger demand side growth is the only reason for the improved market conditions in the dry bulk shipping sector.

In short, the fundamental balance of the market has improved, and freight rates can still reach profitable levels in 2019. But bringing profits back remains in the hands of shipowners themselves. But staying on the road to recovery requires a series of extremely tough and sustained measures to be taken, year on year.

“The dry bulk market is still in a terrible condition. Regardless of a significant improvement in the BDI from its all-time low back in February 2016, the freight market remains lossmaking and in a very bad state.”

“The market has risen only from ‘catastrophic’ to ‘gloomy’ - so the need for shipowners to take decisive action remains.”

“When you claw your way back from the worst market ever – the road is long, rocky and tough. It requires stamina, adaptation and determination from all shipowners. The market has improved based on growing demand, but the sector cannot rely on this alone – which is out of its own hands.”

“The industry must act decisively to reduce the enormous overcapacity of tonnage by keeping demolition activity high, even as freight rates go up – to make the recovery a sustainable one.”

How are we doing on demolition of excess capacity?

For the first five months of 2016, shipowners were doing just the right thing. They were limiting the impact of new deliveries launched into the market by demolishing ships which were creating excess capacity.

From January to May, a net fleet growth of just 4 million DWT meant that the dry bulk fleet grew by 0.5%. This was right on BIMCO’s target to reach a net supply growth of 10 million for the full year, based on 50 million DWT of newbuilds fed into the market and 40 million DWT taken out of the market for demolition.

Much more needs to be done

As of early October, the changes to the supply side of the dry bulk shipping market are no longer on target, if judged by net fleet growth. This is because shipowners have halted demolition of excess shipping capacity while taking delivery of newbuilt ships at an unchanged pace. The dry bulk fleet today is 1.75% larger than at the start of 2016. 38.8 million DWT has been delivered in the first nine months of the year, while only 25.2 million DWT has been demolished.

In conclusion, the lack of action on demolition means that the development of the supply side of the freight market has made the situation worse – if compared to our original “Road to recovery”, where the 2016 net fleet growth was estimated at 10 million DWT. 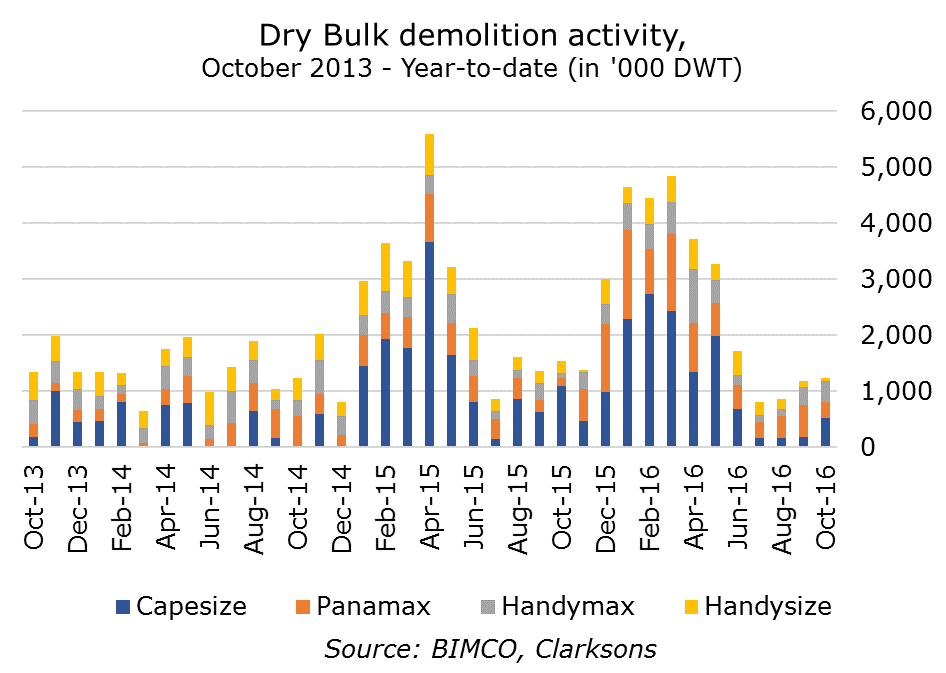 Taking the sailing distances into account as well, the added tonnes of cargoes coming from long-haul trades further improves the picture, as the tonne-miles demand growth rate increases significantly. Our current estimate suggests the demand side will improve by 1.4% in 2016, up from 0.1% in our original tonne-mile estimate.

In conclusion, the demand side has clearly improved in comparison to our original “road to recovery” report in May 2016, where the 2016 demand growth rate was estimated at 0.3% for 2016.

In our projections, we have set the demand side to grow by 2% from 2017 onwards. The developments in 2016 seem to have smoothed the path upwards from the low level in 2015.

The overall fundamental balance has improved

Weighing up the improvements to the demand situation and disappointments of the supply side slips, the overall fundamental balance has improved.

Shipowners did not do enough work on the supply side of the market - the improvements of the market were predominantly driven by a stronger demand side growth.

Why are freight rates still sluggish, then?

Because the market is still awash with excess shipping capacity. Improvements like those seen in 2016 so far are needed for many years to come.

“The slowdown in demolition activity is alarming. The work needed to be done on the supply side is substantial and the low level of demolition merely postpones the recovery.”

“What is clearly keeping the dream of a profitable market in 2019 alive is the fact that global shipowners and investors have stayed away from the shipyards.”

“Marred only by the 30 VLOCs ordered from Chinese owners confirmed in March and April, we have only seen a handful of new orders for dry bulk ships.”

It remains of key importance to stay on that track, in order to achieve the zero supply growth rate in coming years, as demolition activity is bound to slow upon a gradually improving freight market”.