Global demolition activity rose in the first nine months of 2016 in comparison to the same period of 2015, by 16%. Showcasing shipping industry action, to counter the imbalance between supply and demand in the market.

Global demolition activity rose in the first nine months of 2016 in comparison to the same period of 2015, by 16%. Showcasing shipping industry action, to counter the imbalance between supply and demand in the market.

However, diminishing demolition activity from March through July was bad for the recovery of the market. But could the recent increase in August and September be seen as a mild sign of hope? Next weeks’ update of BIMCO’s “Road to Recovery” will shed more light on recent developments, specifically on the dry bulk sector, whereas this analysis focuses on the total shipping industry’s demolition activity.

However, comparing the period May - September 2016 in the same period as last year, the growth of demolition activity adds up to 2.9m DWT or 26%. Therefore, the decrease in scrapping from the fourth till the ninth month of 2016 can be accounted for by cyclical demolishing activity.

BIMCO’s Chief Shipping Analyst Peter Sand says: “The poor global economic situation, as well as the depressing outlook for most of the seaborne shipping sector caused by excess supply of capacity, needs to be countered by a drastic increase in demolishing activity in order to lower merchant fleet growth.”

Throughout 2014, 33.9m DWT was demolished; China accounted for 26% and became the major ship breaking location. In 2015, demolition increased in comparison to the previous year by 5.8m DWT 15%. Bangladesh scrapping yards recycled 35% of the total in 2015.

In the first nine months of 2016, the market-share of Bangladesh diminished to 32%. However, it still maintained leading position as the single biggest scrapping location. Comparing the period between January through September 2016 to the total previous year’s amount in DWT is a record in the making, 94% is already scrapped in the yards. 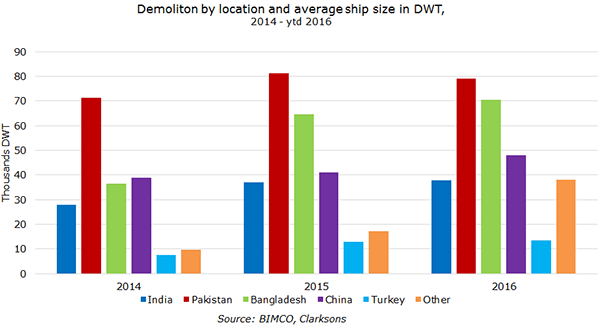 In reference to the available data from the beginning of January 2014 through September 2016, the average demolished ship size in DWT increased on a year-on-year basis by 32% in 2015 and additionally 13% in 2016.

Peter Sand adds: “The trend for the demolition of bigger ships can be explained by weak global demand, especially for containerships in 2016, which is not growing at the pace needed to match excess containership capacity.

Another factor is the expansion of the Panama Canal, which takes the uniqueness away from the panamax ship segment.”

Pakistan has demolished, on average, the largest ships in DWT in the period between 2014 until present day. In the current year, Pakistan’s scrapping yards have on average ships with 79,077 DWT on their docks, in comparison to the global average of 47,845 DWT per ship. 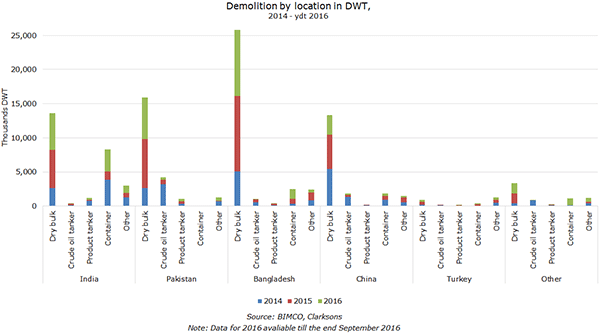 Substantial differences between demolition by ship segments and demolition location

The dry bulk segment accounted for, from the beginning of January 2014 through September 2016, 72.9m DWT or 66% of the total demolition. Bangladesh demolition yards, took 35% alone of the total bulk demolishing activity. Throughout the years, in consecutive order, 16.4m DWT, 30.6m DWT and 25.8m DWT of the dry bulk shipping segment was scrapped.

Crude oil tankers accounted for 8.6m DWT or 8% of the total demolition in the entire reference period, especially in the year 2014 where 73% of the crude oil tanker total was scrapped. Pakistan alone demolished the majority of this particular segment with 49%.

As a minor segment, product tankers accounted for only 3.2m DWT or 3% of the total demolition in the entire period. In 2014, 46% of the total for this segment was demolished, the majority in India with more than 50%.

Containership demolition accounted for 14.2m DWT or 13% of the total demolition in two years and nine months starting from January 2014. Most notably, India demolished, in the whole period, 8.3m DWT or 58% of the total. The majority of India’s container ship demolition occurred in the year 2014 with 3.8m DWT or 46%. In the first nine months of 2016, 6.1m DWT or 43% has already been demolished, therefore marking the current year a record breaker. 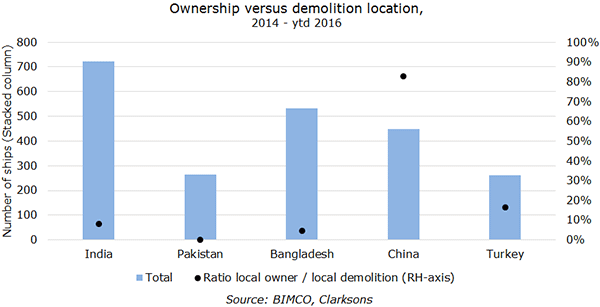 Peter Sand adds, “The high ratio of Chinese shipowners demolishing at local shipbreaking yards can be explained by the government-run rebate programme. It provides additional subsidies to Chinese shipowners who choose to recycle their ships in Chinese yards.”

Contact online
BACK TO: Update on the “road to recovery" for the dry bulk market: improvement on the demand side only but the supply side is worse off NEXT: UK seaborne coal imports plunge 64% as a worrying trend lurks