The main exporters of thermal coal for coal- fired power plants to the United Kingdom (UK) have experienced a heavy decline in seaborne cargo volumes in 2016. This comes as a result of the UK starting a concerning trend for the dry bulk shipping industry, by close to doubling its Carbon Price Floor (CPF).

The main exporters of thermal coal for coal- fired power plants to the United Kingdom (UK) have experienced a heavy decline in seaborne cargo volumes in 2016. This comes as a result of the UK starting a concerning trend for the dry bulk shipping industry, by close to doubling its Carbon Price Floor (CPF).

Russia, Colombia and the United States (US) have been the top coal exporters to the UK for the previous three years. The long hauls from the US and Colombia have historically been strong routes for the dry bulk industry, as they have provided a lot of tonnage miles. Since the UK increased their CPF to £18 per tonne of CO2, the exports from the three main exporters during the first 7 months have declined 69% compared to last year and the UK total import of coal for coal- fired power plants is down 64% for the same period.

Peter Sand Chief Shipping Analyst at BIMCO comments: “This is one of the most significant effects, which has impacted the demand side of the global dry bulk shipping industry in 2016. It reflects something bigger lurking beneath the surface of the coal industry and in transportation of this commodity.

The declining trend in coal consumption in the UK is affecting the dry bulk industry negatively and this story will not be the only one”. 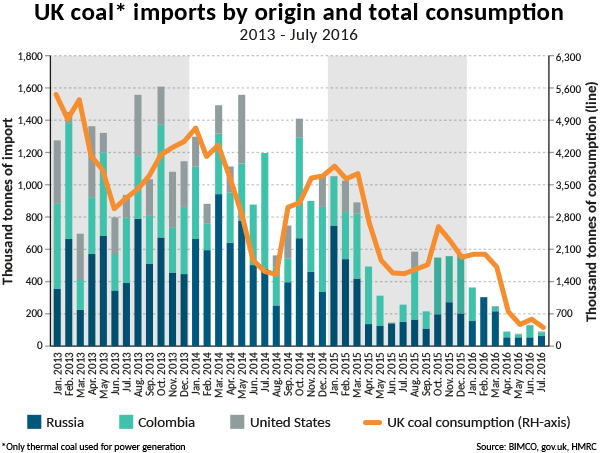 When the CPF first came into effect in April 2013, it was based on the carbon price support (CPS) price per tonne of CO2 on top of the EU emission trading system (ETS) rate per tonne of CO2. At that time the CPS was £0.819 per Gigajoule (GJ). The introduction of this led to closures of several coal plants from 2012-2014 in the UK, with a total capacity of 8.4 Gigawatt (GW), enough to generate electricity for an estimated 6.7 million homes (Total: 25 million homes).

Peter Sand adds:” Implementing a tax which increased the total price of coal by 138 %, caused an immediate reaction from the UK coal-fired power plants. The dry bulk industry is hugely affected by this, due to a large reduction in long haul thermal coal imports.”

Depending on the other European countries energy mix, their electricity exports will be a surplus of renewable fossil fuel - or nuclear energy.  If the electricity generated comes from fossil fuel it may offset the declining UK coal imports somewhat and the change in demand for the dry bulk shipping industry will be less severe.

While the effect of the UK carbon price floor to coal imports is undeniable, the European Union emission trading scheme (ETS) has not limited coal imports to the same extent. The development of the European ETS rate per tonne of CO2 from €30 in 2008 to the current €5, has not incentivised others to reduce coal consumption on a large scale. The decrease of the EU ETS rate is primarily due to an oversupply in allowances. 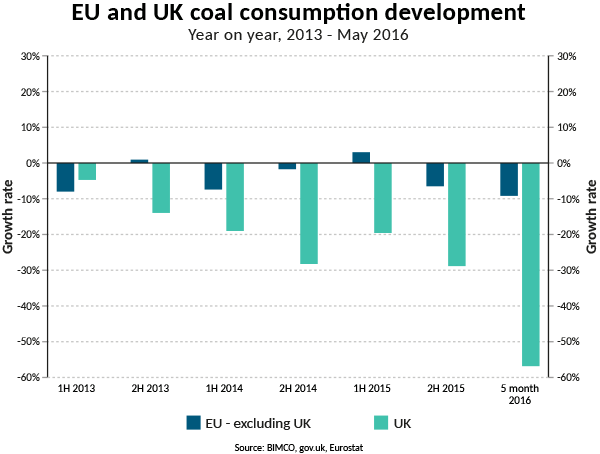 UK coal consumption has been falling for four years, while the development in EU coal consumption has been more stable. The increase of the CPF level in 2016, caused a decline of 56.7% year-on-year for the first five months of 2016. A total of 6,839 thousand tonnes was consumed in the first five months, compared to 15,800 thousand tonnes in the year before.

Peter Sand comments: “It will be a setback for the dry bulk shipping industry if the CPF becomes a standardised scheme and is adopted by other nations as well as on a supranational level. It will, if introduced at the same level as in the UK, cause a similar development and closure of coal-fired power plants.

France, importing the fourth largest share of coal for European countries (8%) in 2016, has already imposed a CPF on 30€ per tonne of CO2 planned to be introduced in January 2017”.

Contact online
BACK TO: Demolition activity slowly but steadily grows…yet again NEXT: Lowest level of newbuilding contracts in 20 years 12 Sept. 2016