After a decline from 2010 to 2012, shipbuilding had a rebound in 2013 and was expected to level out over the next few years. The reality was a slight decline in 2014 and 2015, but still high levels of contracting measured by compensated gross tonnage (CGT). Since then, shipyards have crashed, as the contracted CGT globally has reached its lowest level since on record.

Peter Sand Chief Shipping Analyst at BIMCO comments: “Since the high contracting in 2013, BIMCO expected the shipyards could come under pressure. This expectation became a reality at the start of 2016, with Q1 contracting the second lowest CGT in 20 years.

A low level of contracting is exactly what the shipping industry needs in order to eventually restore the fundamental balance between supply and demand”. 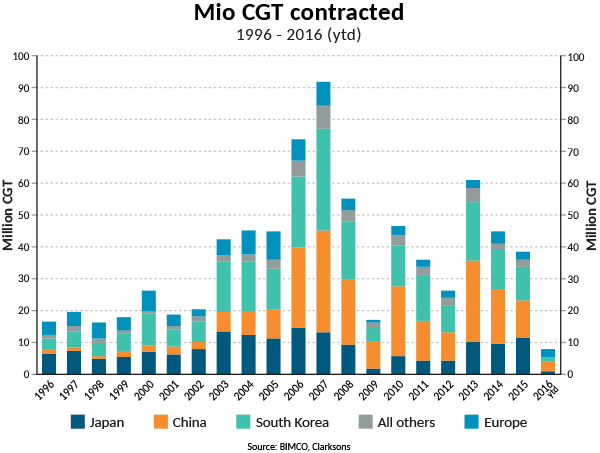 Japanese and South Korean contracts down by 86%

Alarming order cover due to overcapacity at the shipyards

The effect of declining contracts and continuing shipyard overcapacity has put pressure on the shipyards order cover. The order cover is the number of years it will take to deliver the scheduled order book, based on the capacity of the shipyards. Therefore, a low order cover can be a result of high capacity at the shipyards, as well as a decreasing order book.

Shipbuilding in South Korea is suffering the most, as they hold orders for less than two years of building. Europe continues the positive trend seen in contracted CGT, with increasing order cover. This shows that additional contracting orders are not being absorbed by new shipyards entering the market. 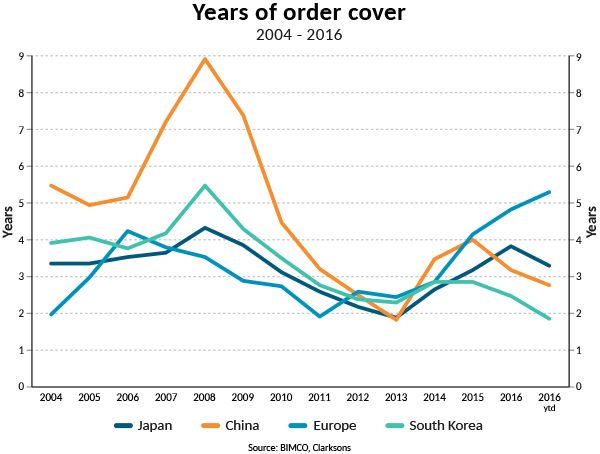 * The order cover is calculated by the size of the shipyards current order book over the previous year’s average monthly output.

Peter Sand comments: “There is a declining trend for Japan, China and South Korea and with such low levels of newbuilding contracts being placed, this will look even more severe next year. However, the order cover could have been even lower, if capacity had been taken out due to shipyards cutting down on operations or closing entirely”.

South Korea saw the order cover start to decrease from 2014 to 2015, whereas China and Japan saw the decline one and two years later respectively. This might be an indication of South Korean capacity being held artificially alive by government support. Government support is seen in many places in the shipping industry.

It’s positive to note that Europe’s order cover is still increasing and is currently 5.3 years. Europe is however only responsible for 9.3% of the global order book. The order book for Europe consists mainly of ferries, tugs and cruise ships.

As 67.9% of the Chinese order book and 58.4% of the Japanese order book are deliveries for either the container, dry bulk or offshore segments, there is a possibility for postponements and cancellations. The postponements can add a further headache to the shipyards’ liquidity, as the final payments in these cases may be delayed.