Severe overcapacity in the market and recently agreed contract rates on the transpacific trade lanes keeps pressure high on the liner companies.

Severe overcapacity in the market and recently agreed contract rates on the transpacific trade lanes keeps pressure high on the liner companies.

Without doubt the slow economic growth globally and the moderate recovery in Europe results in slow growth in world trade - including container trade. Q1 was especially poor in terms of global container throughput, which, according to Drewry, went up by just 0.5%. Q1 saw no growth year on year in throughput in Chinese ports, whereas they grew by 3.2% in Q2-2016 compared to the same period in 2015. Overall container demand grew around 2% in Q2-2016 compared to Q2-2015. Global container demand is struggling to achieve a GDP-to-trade multiplier of one.

Reflecting on our last report, where BIMCO stated that demand is not really going anywhere, we now see a development, minor and slow, but above all positive.

In the key trade lanes into Europe, primarily from East Asia, demand grew by 1.4% in the first five months of 2016 compared to the same month in the previous year.

The weak demand growth in Europe hit spot freight rates on transatlantic services, but more importantly on services out of Shanghai, which was hit hard during the first four months of 2016. Since then successive general rate increases have lifted freight rates above the USD 1,000 per TEU mark after hitting an all-time low during March and April where rates hovered around USD 250 per TEU. Freight rates for Shanghai to Europe have not stayed above USD 1,000 per TEU for more than one week at a time since Jan/Feb 2015. 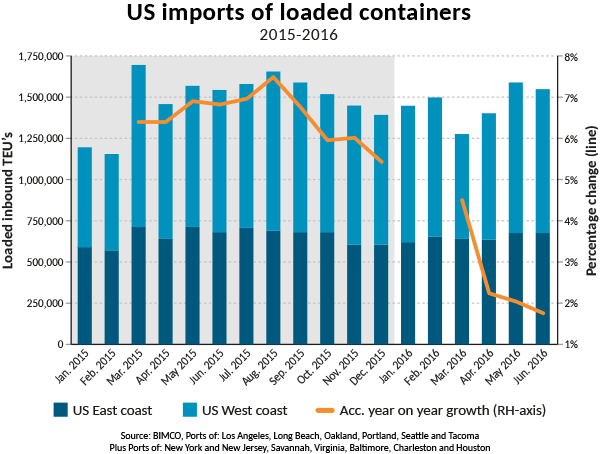 BIMCO’s own data for the United States (US) imports on the west coast shows a year on year increase of 3.6% for the H1-2016 against H1-2015. Meanwhile on the US east coast, import growth of loaded containers has stalled completely, exhibiting a year on year decline of 0.4% in H1-2016. However, being able to hold onto past volume growth – almost – is positive for the east coast ports as it shows that last year’s growing throughput of containers (+12.6%) has become permanent. Total imports on both coasts are up by a decent 1.75% in H2-2016 year on year.

Unfortunately, the effect of a positive demand growth has been crippled by carriers deploying too much tonnage into the trade lanes. 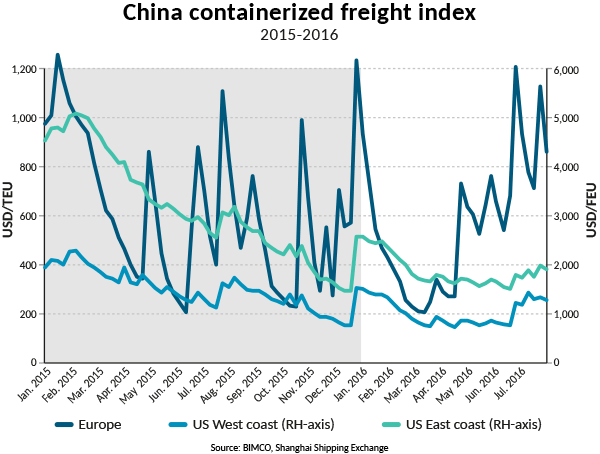 The container shipping fleet has now passed 20 million TEU, at a point in time where no celebrations will follow. Total fleet growth year-to-date in 2016 stands at 1.5% by 9 August. 85 units with a combined capacity of 598,000 TEU were delivered, while 92 units representing 303,000 TEU left the fleet to be demolished.

This high pace in demolition activity prompted BIMCO to upwardly adjust (by 30 June) our estimate for a full year demolition of capacity in 2016, now set at 400,000 TEU. The fleet is developing as expected as the delivery of new ships also is slightly higher than earlier estimates. In total, this points towards a full year expansion of 3.3% for the nominal fleet (including idle ships).

The tough market conditions mean that nominal fleet growth does differ somewhat from active fleet growth. According to Alphaliner, the idle fleet totalled at 1,019,937 TEU by 8 August. 91% of the idled capacity is of ships below 7,500 TEU, controlled by non-operating owners.

Anecdotal evidence points towards “old” panamax containerships feeling some heat after the opening of the new set of locks in the Panama Canal, which allow ships up to 13,000 TEU to transit. Idling of those ships appears to be more long term than that of other ship sizes.

Such a high level of idled ships as we enter the peak season of the year (Q3) has not happened since 2009. A very positive development and a sure sign that reality has hit home. This adds to another extremely positive trend, that of almost no new orders being placed.

So, for the industry to stay on track into profitability, it’s vital that new orders are rarely placed and only against retirement of other ships. 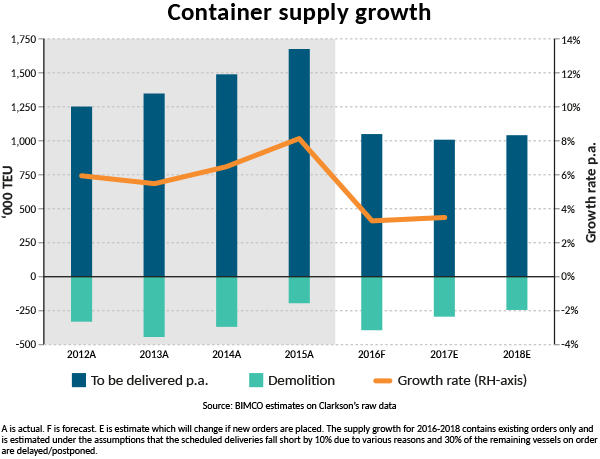 Slow steaming and idling remain essential parts of a freight rate improvement until the market (especially the demand side) is strong enough to support extra capacity in the key trade lanes.

Cascading, in the chase to reap economies of scale, has damaged earnings on all trade lanes, as ships way too big for requirements have been introduced aggressively. But without enough cargo, running ships with too much capacity brings down utilisation and profitability

IMF notes that “high frequency” indicators point to lower economic growth in the second half of 2016 for the euro area. This could cool the East Asia to Europe trade even before it was back on track.

As we are now well into the peak season of the year (Q3), demand growth may support utilisation levels of the ships, but severe overcapacity in the market and recently agreed contract rates on the transpacific trade lanes mean the pressure remains on the container shipping industry.

Over the coming year, carriers will feel the drag of the new, and much lower level of annual transpacific (price and volume) contract freight rates which were agreed on 1 May 2016. Anecdotal evidence indicates that the price offered to the largest customers has dropped below USD 750 per FEU for US west coast bound containers and USD 1,500 per FEU for those east coast bound. These levels reflect the poor spot market during the negotiation period.

Agreeing to such low rates demonstrates clearly that container shipping customers are enjoying a negotiating power not seen since 2009. And they are taking advantage of it. Carriers can fear an even worse spot market in the coming year. The fight for market share among carriers will surely exaggerate this imbalance, making a bad situation even worse.

For the full year to balance out between supply and demand growth, we need demand to grow in Q3 and Q4. Year-to-date the balance has worsened. Demand has been slow, part of the idle fleet has been reactivated and new ships have outstripped the number of ships being demolished.

Contact online
BACK TO: Lowest level of newbuilding contracts in 20 years 12 Sept. 2016 NEXT: Tanker shipping: The expected negative change of market balance is taking its toll 5 Sept. 2016