Tanker Shipping: Signs of weakness are appearing, but still money to be made

Our recommendation remains to balance your exposure to market by seeking a fixture in the time charter market.


For the oil product tankers, Q3-2015 stands out as the peak quarter of the current cycle. Earnings in Q1-2016 were the lowest since Q3-2014 when the markets started to rise. 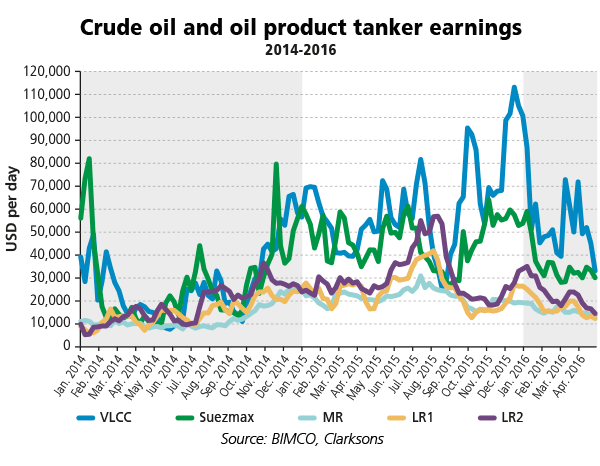 BIMCO believes that having a volatile oil price gives a stronger oil tanker market than one where oil prices are stable – high or low. Volatility in oil pricing and growing arbitrage opportunities due to price differences between the same oil products in different places around the world provides a lot of business. Trading in crude oil and oil products is an important demand component, one that often provides a boost to tanker demand in the market. This supplements the demand coming from the end consumers of oil.


Only 4.35 million DWT of crude oil tankers, out of BIMCO’s expected 21.4 million DWT for the full year, have been launched. This has buoyed the freight market in Q1. Still, it is the highest quarterly volume of newbuild deliveries for almost three years.

For the product tankers the opposite has been the case in Q1, when 2.8 million DWT was launched. That is 1/3 of BIMCO’s full year estimate. LR2 and MR tankers represent the lion’s share of new tankers in 2016.

The total number of newbuilding orders for tankers in first quarter of 2016 was eight, out of which five were for oil product tankers. Only one VLCC has been ordered by mid-April. A sharp contrast to the scary 66 new VLCC orders placed in 2015.

The tanker market may be the only shipping market that is profitable for the time being. This makes it even more positive to note that the money made is not immediately being “put to work” in a traditional sense, by placing more orders for new ships.

Demolition activity has naturally been low, as only nine tankers- built between 1977 and 1995 with a total capacity of 412,000 DWT - have been taken out the fleet. For the full year 2016, BIMCO expect 6 million DWT of tanker tonnage to be demolished, mostly crude oil tankers. 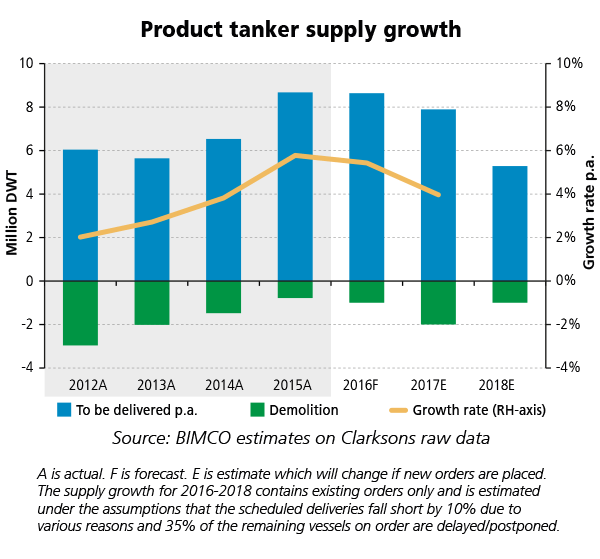 For the mid-term outlook, the supply side for tankers looks to be on the heavy side.

For oil product tankers, BIMCO expect the fleet growth to come down in 2016 and 2017, based on current orders and anticipate a continued slow uptake of new orders.

For crude oil tankers the opposite situation is in the making. BIMCO expects 2017 to surpass 2016 on all parameters: new deliveries, demolition and net fleet growth.

While all eyes are on how quickly Iran can ramp up production and increase its exports, neighbouring Iraq is not letting go of its market share without a fight. Iraq exported an average of 3.26 million barrels of oil per day (bpd) through its southern terminals in March, up from 3.22 million bpd in January 2016 and 2.5 million bpd in the full year of 2010.

Reports of 2.2 million bpd being exported in February tell us that Iran is ramping up export capacity steadily. This will bring more oil to the market and hopefully positive economic growth in Iran that will have a general positive impact on shipping.

The International Energy Agency (IEA) forecast global oil demand to grow by 1.2 million bpd in 2016, while estimating that demand grew by 1.8 million bpd in 2015. Both numbers provide solid demand growth for oil tankers. Currently oil supply is also coming down, limiting stock building, which we have seen on a large scale since mid-2014, when oil prices started to come down. BIMCO has argued that bloated oil stocks represent a risk to tanker demand going forward, but we also note that the new stock levels may become permanent, and if that is the case, we will not see tanker demand come under pressure due to that. Time will tell.

Independent Chinese “teapot” refiners continue to support crude oil imports into China as they take advantage of the extended allowance to export more refined oil products in 2016. In particular, the VLCCs may continuously benefit from this in the coming months. This is a growth in demand that has caused congestion around main discharge areas. 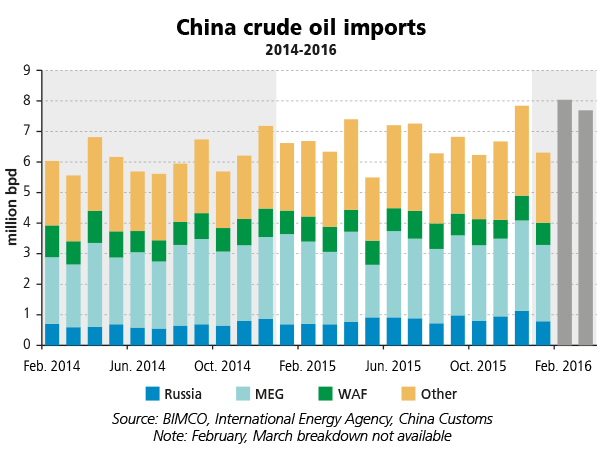 In February, China imported a record of 8 million bpd. While March saw 7.68 million bpd landed. This compares to the 2015 average of 6.7 million bpd. The dominant part of the increase is due to the “teapots”. Q1 imports hiked by 13.4% year on year.

As strong as the demand side is, the market acknowledges that changes during 2016 to the freight market fundamentals may result in lower earnings going forward. Asset prices for crude oil tankers, as well as oil product tankers started to decline in August 2015, not dramatically but in response to the outlook. Only 37,000 DWT handysize product tankers seem to defy forecasts. The key development will therefore be the large inflow of new tonnage, especially crude carriers, and how big an impact that is going to have on freight rates.

Contact online
BACK TO: Containership fleet on the brink to break through the 20 million TEU barrier NEXT: Macro Economics: Continuing low GDP growth reduces output, demand and investments