On 12 April 2016, the International Monetary Fund (IMF) released its updated World Economic Outlook stating that future economic prospects are now so poor that an immediate, proactive response is called for.

On 12 April 2016, the International Monetary Fund (IMF) released its updated World Economic Outlook stating that future economic prospects are now so poor that an immediate, proactive response is called for. There is a need for a more potent policy mix to turn the tide based on well-known elements: fiscal and monetary policies, as well as structural measures. IMF suggests joint action by nations across the world. Growth-friendly revenue generation and spending should be the central focus of fiscal supportive initiatives.

To what extent the downward adjustment in emerging economies relates to the United States (US) central banks’ initial rise in interest rates (Dec 2015) is difficult to assess. The US slow-down on quantitative easing had a big negative effect on capital flows into investments in emerging economies. 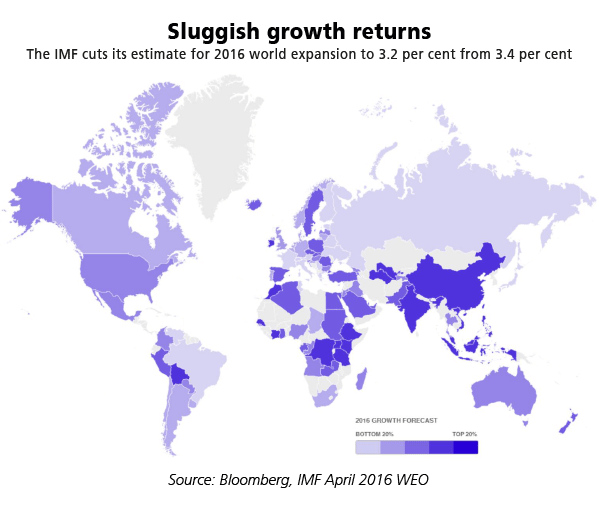 While the US remains the global economic stronghold and the country that has advanced the most in its recovery – not everything is perfect. The dark spot being US industrial production, down seven months in a row on a year on year comparison. The change being partly due to the slowdown in the energy sector.

The subsectors of “utilities” and “mining” slipped by -9.3% and -9.9% on a year on year basis in February whereas manufacturing went up by 1.8% over the same period. The struggling mining sector affects the dry bulk industry badly. Total seaborne US exports of coal dropped by 20.6 million tonnes (-25%) in 2015 and could slip by another 14 million tonnes (-23%) in 2016 according to Simpson Spence Young (SSY). 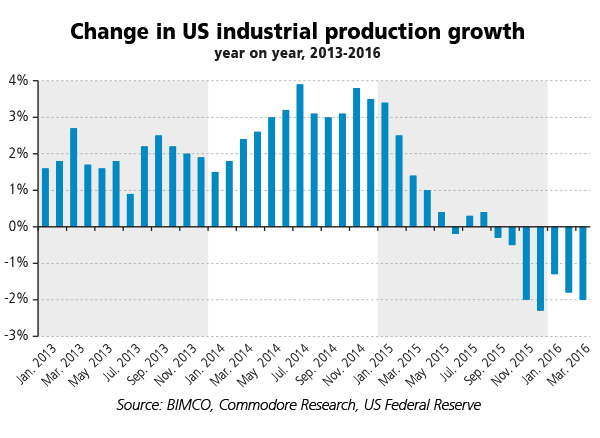 While job creation in the US has been consistently strong over the past year, we have not seen wage pressures contributing to higher inflation rates until recently. US inflation averaged at 0.7% in 2015, but has picked up in the first quarter of 2016. The unemployment rate stands at 4.9%, half that of the European region.

Overall GDP growth for emerging markets and developing economies continues its bumpy recovery according to the IMF. China has moved up by 0.2 percentage points, India together with ASEAN-5 are unchanged, but Japan has seen its 2016 GDP growth estimate halved, now at 0.5% from the year before. Growth and inflation are weaker than expected in Japan, clearly seen from data on poor private consumption. BIMCO stated earlier this year that Japan could surprise everyone and show growth on the back of a poor 2015. We now know it could actually be the opposite, as illustrated by the March levels of the Tankan-index for large manufacturing companies, which fell to its lowest level since mid-2013.

In China, we see early indications of what could be a stabilisation in some of the relevant sectors of the economy. The official manufacturing PMI rose to 50.2 in March from 49.0 in the month before, impacted by government stimulus. More importantly, perhaps, the Caixin manufacturing PMI, which focuses on private small and medium-sized enterprises, improved from 48.0 in February to 49.7 in March. This is the best reading for more than a year and was driven forward by domestic and foreign demand. 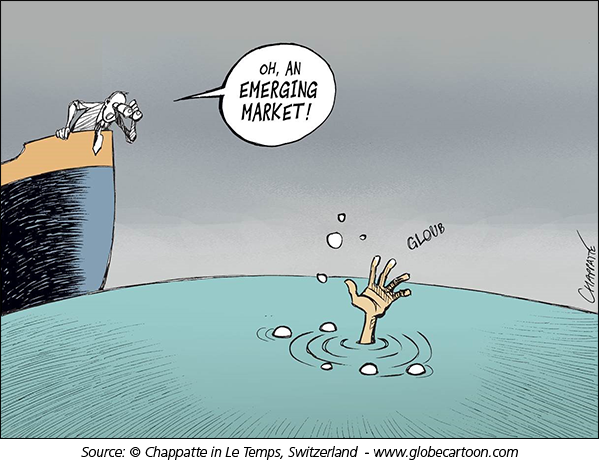 While Europe’s recovery continues at dead-slow speed, there are improvements seen in other indicators besides overall GDP growth figures. Unemployment in the Euro zone has fallen three years in a row now, but is still too high at 10.3% in February. This means that the European Central Bank (ECB) is not getting any help from the labour market when it comes to lifting inflation. The inflation rate stood at 0.0% in March up from -0.2% in February. As the ECB over several years now have told the market that it will do “whatever it takes” to stabilise prices, it impresses no one to see how slowly economic activity picks up. The Euro region has now seen negative interest for close to two years. However, it is not deterring banks from placing deposits at the ECB, instead of increasing lending. Deposits made by commercial banks with the ECB have jumped six-fold since February 2015, equal to about 85% of the monetary expansion during that period. Meaning that the real economic effect from ECB actions is limited.

BIMCO still expects the economic situation in Europe to improve gradually, in spite of the IMF downward revision, as that was in line with the overall development across all advanced economies.

As the oil price now seems to have bottomed out, the world now has to prepare for a different future. A future where oil price volatility may not be a one-sided slide as it has been since mid-2014 until January/February 2016. WTI and Brent currently quote USD 40-45 per barrel, up from USD 30 per barrel.

This means that bunker prices will start to go up too. From 2014 to 2015, average bunker prices dropped by 50%. The prudent owner with a long cargo book and significant future contract of affreightment commitments may choose to manage risks by hedging the expected bunker consumption at the current fuel price level. If he has not done so already.

‘Brexit’ represents a good deal of uncertainty, where no one benefits. Much needed policy actions are being put on hold due to this, in order for central banks and governments to save “ammunition” to fight even bigger troubles a few months down the road. If the UK exits the EU following its referendum in June 2016 – and that coincides with a steeper slowdown in China and more severe economic chaos in Brazil – institutions may blame themselves if they run out of “ammunition” in the middle of the battle. The fact is, the global economy needs action to be taken now. Lack of action now, may simply contribute to more or bigger troubles later.

Many of the commodity exporting countries still face hardship going forward, as the dwindling oil and gas prices and lower prices for other key commodities has resulted in financial distress for public finances. This hits hard, when your economy is overly reliant on the revenue made from commodity exports, as it is the case in Russia, Nigeria and Saudi Arabia. This not only leads to less exports from these countries but also lower growth and thereby fewer imports, all of it impacting world growth and shipping negatively.

Contact online
BACK TO: Tanker Shipping: Signs of weakness are appearing, but still money to be made NEXT: Dry Bulk Shipping: Improved freight rates despite continued fleet growth