The demand for container shipping is stalling at the moment. Indicators for growth in the first months of 2016 point to limited overall demand and huge variations from trade to trade.

The demand for container shipping is really not going anywhere at the moment. Indicators for growth in the first months of 2016 point to limited overall demand and huge variations from trade to trade. In addition, all numbers are impacted by Chinese New Year, which disrupts most trade figures for the first months of any year.

BIMCO’s own data for the United States (US) imports on the east coast shows an increase of 6.5%, a significant rise even above the strong level seen in 2015. The west coast imports of loaded containers are only impressive in comparison with the very poor volumes seen in 2015. These were impacted heavily by the conflict between the International Longshore and Warehouse Union (ILWU) and the Pacific Maritime Association (PMA) which clogged up the main ports.

Volumes going into Europe from Asia dropped 6.8% in Jan-Feb 2016 from the year before, according to Container Trade Statistics (CTS). It’s not just the volumes via transhipment that used to go into Russia which caused the volumes to drop. Mainland Europe demand continues to be weak in itself. In 2015, volumes transported from Asia to Europe dropped by 3.6%. Out of which, volumes going specifically to Russia dropped by 24.2%.

Head haul TEU-miles globally were down 1.2% in Jan-Feb 2016 (as measured by SeaIntel) compared to the year before. A similar negative development was seen in 2013, whereas 2014 and 2015 saw sailing distances grow faster than underlying TEU demand.

This drop in demand for container shipping was also reflected in freight rates on all the container routes out of Shanghai covered by the Shanghai Shipping Exchange. Nearly all of the head haul freight rates sit at their lowest levels on record by mid-April. Both trades going to US east coast and west coast are 50% below a six year average for April. For Shanghai to Europe it is slightly worse. The exceptions are to destinations in East Japan and Santos, where rates are above the 2015-level but still below the six year average.

Time charter rates seems to have reached their lowest possible level. Only very few charters exceed six months in duration. A clear sign of how bad the market is. No one commits to a longer term under current market conditions. “Bid and ask spreads” for longer term time charters are simply too wide, a huge change in that market over the past year.

The selected charter rates shown in the chart indicate a flat line for most segments, but 4,250 TEU ships have seen rates slide from USD 5,700 to USD 5,250 per day in April alone. 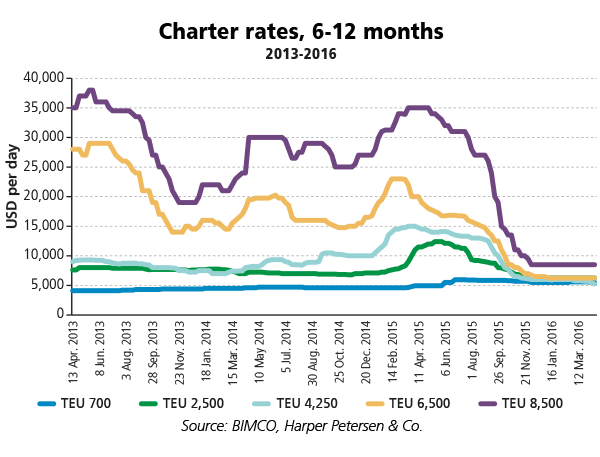 The delivery of new containership capacity, as well as the recycling of superfluous ships has exceeded our expectations slightly in 2016. 240,730 TEU was delivered into the fleet in Q1, whereas 105,509 TEU left it. The net growth of the fleet in Q1 was 0.7%. For the full year BIMCO expects 3.4%, slightly up from our January estimate.

March saw the record broken for the largest containership ever to be demolished. The 15 year-old, 6,479 TEU post-panamax “CSAV Papudo” was sold to breakers in India at a strong USD 295 per ldt and became only the second ship with a capacity of more the 6,000 TEU to be demolished.

Demolition of excess shipping capacity lies at the centre of the road to recovery, also for container shipping. Multiple years of negative fleet growth is needed to bring back sustainable freight rates to the industry. BIMCO’s forecast of 250,000 TEU to be broken up in 2016 only cuts into the fleet by a fraction representing 1.26% of the current fleet size. By mid-April owners have sent 115,570 TEU to the breakers primarily in India. 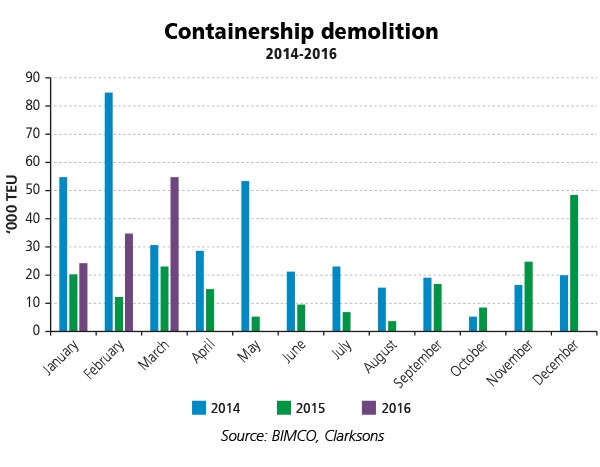 With regards to new contracting activity, no orders have been agreed in 2016. This is the first time since Q2-2009 that three months have passed without any new orders signed. The lack of orders reflects the very poor market conditions and the fact that 2015 saw 2.2 million TEU being ordered. This was the second ever largest volume of containership capacity ordered annually– second only to 2007 when 3.25 million TEU was contracted. The one-sided focus on cutting costs per transported TEU by ordering ever larger ships continues along the lines of “bigger is better”. In 2015, 119 ships with a 10,000+ TEU capacity accounted for 87% of the total new capacity being ordered. The other 118 ships ordered, ranging in size from 1,000 TEU to 5,300 TEU accounted for only 13%.

This year, the average containership size for delivered ships is going down from the all-time-high 7,952 TEU in 2015 to around 7,000 TEU per ship. 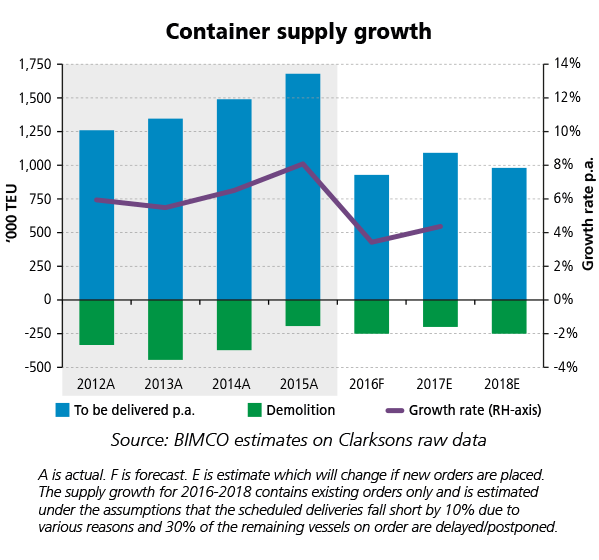 Bunker fuel prices have followed the crude oil prices down from USD 560 per mt of 380 cSt bunker fuel oil in Singapore in 2014, to USD 292 per mt in 2015 and currently costs USD 177 per mt. This has encouraged some liner companies to exploit the lower fuel costs to sail the longer route and avoid the costly canal tariffs in the Suez Canal.

As BIMCO has previously highlighted (in relation to avoiding piracy by re-routing round the Cape of Good Hope) low enough bunker prices open up for the possibility of longer sailings to cut out the expensive Panama Canal and Suez Canal transits. Today, the re-routing option from Europe or the US is a lot cheaper than going via the Suez Canal.

This has prompted the Suez Canal to make an unprecedented move - offering 30% discounts to containerships sailing from the US East Coast back to Asia. Surely, this initiative is also a “welcome present” to the Panama Canal, which will be opening up its new locks for business shortly.

For the shipping industry, this is a very positive move, as canal transit is normally very costly. The opening of the new set of locks in Panama mean more competition for Asia-US East Coast trades – something that we could hope would drive down canal transit fees.

Liner operators currently engaged in negotiations for price and volume contracts, find themselves exposed. They are no longer shielded from the poorly performing spot market, as more and more contracts become index-linked.

Managing capacity by the individual companies in the industry is at the centre of the recovery. As demand is not expected to grow at a pace needed to match the capacity of new ships entering the fleet, extensive idling of the modern and efficient ships in the fleet and continued demolition of the inefficient ships will improve the market both in the short and mid-term. For the longer term management of capacity, a low level of contracting for newbuildings must be maintained. 2016 is off to a good start on all these parameters.

Contact online
BACK TO: Dry Bulk Shipping: Improved freight rates despite continued fleet growth NEXT: BIMCO says dry bulk recovery will be multi-year effort, in an interview with "Akti Miaouli"