With 12 weeks of 2016 behind us, the dry bulk market is still looking bleak. As the current low demand for transportation of commodities continues, the market is doing what it can by scrapping old ships and restraining from ordering new ones.

With 12 weeks of 2016 behind us, the dry bulk market is still looking bleak. As the current low demand for transportation of commodities continues, the market is doing what it can by scrapping old ships and restraining from ordering new ones.

With only four newbuilding orders registered in the first 12 weeks of 2016, dry bulk contracting is merely a fraction of previous year’s activity. New contracts for dry bulk ships have been on a path of decline in the last year and a half. Currently culminating at a level that resembles a standstill. The four orders amounting to 267,000 DWT is less than a tenth of the 2.8 million DWT placed by the end of February last year.

The ordering remains low despite 12-year low newbuilding prices offered from the shipyards. The fact that shipowners have restrained from renewing or adding to their current fleet, is good for the immensely challenged dry bulk market. As an increase in new orders would only worsen the oversupply of capacity in the market, further down the road.

Chief Shipping Analyst, Peter Sand, says: “The low level of new orders is a much needed development in the market. With little to no influence over demand side developments, reducing supply is the only tool owners and operators on the dry bulk market can use to improve on the market situation. The best way to do that is to limit the amount of new orders and increase scrapping.” 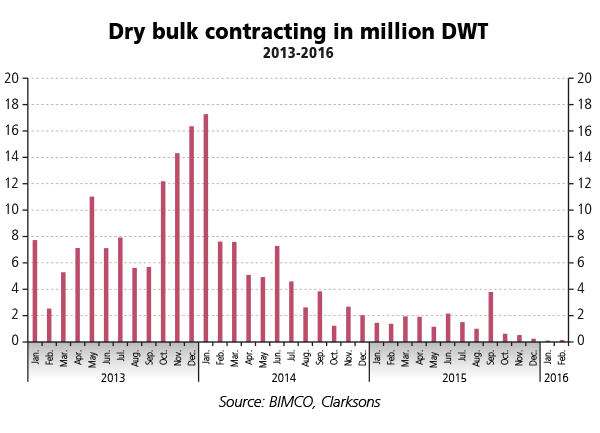 The noticeable outlier in September 2015 stems from a large order by Nippon Steel & Sumitomo Metal Corp. (NSSMC) who ordered nine VLOCs to renew its Capesize fleet.

In addition to the low level of newbuilding orders, demolition has gotten off to a good start in 2016. 144 dry bulk ships have been scrapped so far this year, equivalent to 11.9 DWT. In January and February alone, 111 dry bulk ships were scrapped, equalling 9.3 million DWT. This represents a 42 per cent rise compared to the 6.6 million DWT scrapped in the two first months of 2015.

Despite the low ordering activity, there is still a large order book for future deliveries. This is evident by the fact that 13.2 million DWT of new tonnage was delivered in the first two months of 2016 a slight increase compared to last year’s 11.6 million DWT. 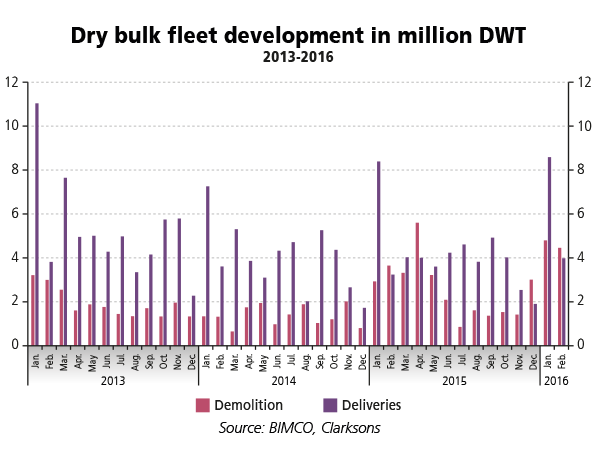 Peter Sand adds, “The increased demolition is taking place despite the fact that the scrap steel prices offered to owners wishing to sell their ship for demolition is run down by a low demand for scrap steel.

The fact that so much has been scrapped in the first two months alone supports our prediction that 2016 will be the busiest year for breaking of dry ships ever."

Contact online
BACK TO: BIMCO: "Dry bulk shipping fleet will grow by 1.3% during 2016" NEXT: Best year ever for container imports on the US East Coast