Best year ever for container imports on the US East Coast

While the US East Coast ports experienced a surge in incoming traffic, labour issues and port congestion gloomed over the US West Coast.

The start of 2015 was dominated by the ongoing contract negotiations between the International Longshore and Warehouse Union (ILWU) and the Pacific Maritime Association (PMA). The conflict between the two parties led to substantial congestion at ports on the western coast, with dozens of ships anchored waiting for berths to open.

Chief Shipping Analyst, Peter Sand says, “As the conflict on the US West Coast dragged out, some of the traffic was diverted to US East Coast ports. These ports benefitted greatly from the diverted traffic but also from the fact that this happened at time when personal consumption of goods in the US was on the rise.

Going forward, one of the big questions will be whether or not the US East Coast ports can hang on to this new business,” he added.

Our US East Coast traffic data is based on a group of ports selected by BIMCO as a representative proxy for the region. When we look at the growth in 2015 on a monthly basis, the inbound loaded traffic was higher in the first 11 months of 2015 compared to 2014. Imports peaked in March with 711,000 TEU of loaded containers - almost 30% higher when compared to March 2014. Only in December did traffic underperform, declining 0.2% compared to 2014. 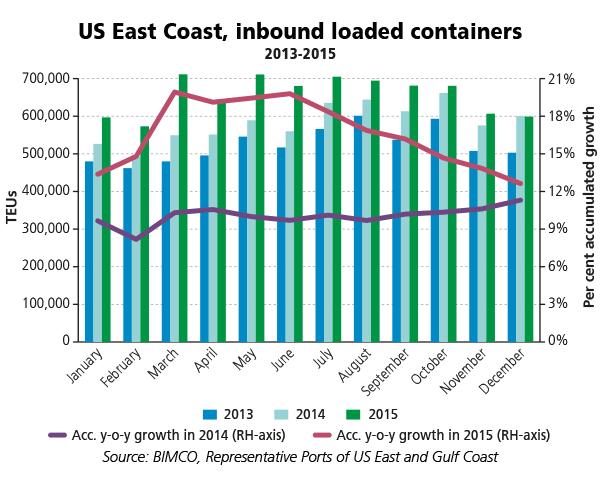 Strong growth across the board

The Port of New York and New Jersey (PANYNJ) manages the majority of the container trade on the US East Coast, with a total of 6.4 million TEUs handled in 2015. The amount of loaded containers that headed into PANYNJ grew by 9.2% in 2015, to a total of 3.2 million TEUs. Despite being the biggest player on the US East Coast, PANYNJ was not the only port to benefit from the growing traffic. Actually, all the ports on the US East Coast experienced strong growth in 2015. The Port of Savannah was the port that experienced the highest growth rate. Rising by 20.4% from 2014, 1.6 million TEU loaded containers entered Savannah in 2015.

On the US West Coast, the quantity of loaded containers entering the ports was virtually unchanged at 10 million TEU in 2015, growing only 0.4% from the previous year. One of the primary reasons for the low growth was the labour dispute, in addition to the subsequent port congestion.

The conflict reached its pinnacle in January and February. The number of inbound containers dropped by 26.7% in January, from 821,000 TEU in 2014 to only 602,000 in 2015. When the dispute was settled, trading quickly resumed and the inbound containers in March were nearly 40%t higher in 2015 compared to 2014. However, most of the increase in March came from the ships already anchored by the coast. 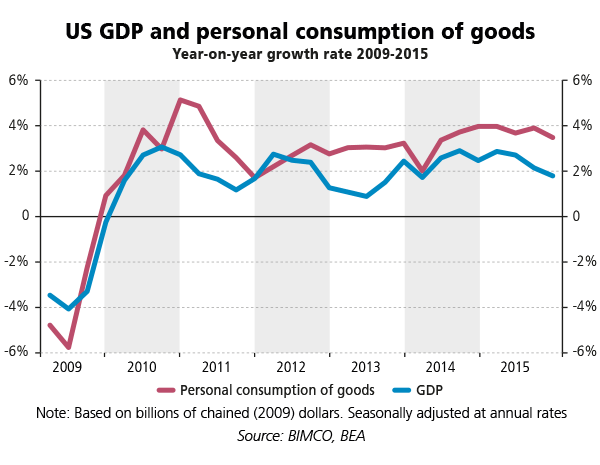 Peter Sand adds, “Despite two consecutive years of double-digit growth at US East Coast ports, it is important to note that the US West Coast ports still handle more volume.

Due to the expansion of the Panama Canal and the lower fuel costs brought about by the lower oil price, we expect to see even more of the Asian imports head towards the US East Coast ports. These ports are currently preparing to cater for ultra-large containerships in the near future.”

Contact online
BACK TO: Dry bulk contracting comes to a halt while demolition is on the rise NEXT: Six new VLCCs marks the start of a busy delivery year