Macro Economics: Uncertainty in Asia echoes around the world

2016 continues where 2015 ended, with all eyes on China. This is mainly because of uncertainty surrounding the development of the world’s second-largest economy. When the first day of the Shanghai Stock Exchange of 2016 closed prematurely, the trading results echoed around the world. It warned us that we are in for a rough ride in 2016.

2016 continues where 2015 ended, with all eyes on China. This is mainly because of uncertainty surrounding the development of the world’s second-largest economy. When the first day of the Shanghai Stock Exchange of 2016 closed prematurely, the trading results echoed around the world. It warned us that we are in for a rough ride in 2016.

IMF has just revised its view on 2016 and 2017, down by 0.2% for each year. Now being more in line with BIMCO’s view of challenging global economics, where the pickup in activity is more gradual than earlier IMF estimates.

The lifting of Iran’s sanctions will impact shipping. As Iran is now fulfilling its obligations under international agreements, the suspension of sanctions will increase the country’s foreign trade, making a positive impact on international shipping. Large-scale investments are needed for Iran to make a significant impact on all shipping segments. Investments in the oil and gas industry are needed to facilitate a growth in exports, as well as increasing the purchasing power of the 80 million Iranians before imports can be boosted.

The US have finally started hiking interest rates. This much anticipated event, announced by the US Federal Reserve Bank (FED) on 16 December 2015, may have been “a close call” according to the minutes of the FED meeting. Nevertheless, job creation was still strong in December with 292,000 new jobs, cementing the unemployment rate at 5%.

The US GDP grew by an annual rate of 2.0% in the third quarter. It was comforting to see that private consumption and imports both went up. What did not go up was the inflation rate, but that is not all bad news, as it means that real wage increases are seen across the board, enhancing consumers’ purchasing power.

2016 started with China at the epicentre of volatility. During the first week of the year, the Shanghai Stock Exchange closed for trading twice after falls of 7% in the leading index. A poor reading of the key indicator in the manufacturing sector added to the overall struggles that the economic transition presents for the government. The slow-down in China echoes in most of the emerging and developing economies (EM) from South America via Africa to its closest neighbours. China has in recent years spurred growth in EM, and as economic growth slows down for China as the “main engine” – so it does for others who normally benefit.

The ongoing devaluation of the Chinese Yuan against the US dollar is a two-edged sword. Exports may go up, which will be good for containerised imports into Europe, but imports will become more expensive in China, which may hamper the tanker and dry bulk markets.

Despite lacking fundamental reform in India, the country’s economic performance stood out in 2015, (as measured by the new methodology of calculating GDP in India, implemented in January 2015). GDP grew by 7.4% in Q3-2015 year on year, up from 7.0% in Q2-2015. For 2016, it’s going to be interesting to see if the Modi administration can deliver another year of strong growth, capitalising on the huge rebranding effort by India in being a good place to do business.

Japan is still making its way back from several decades of bleak economic performance. Prime Minister Shinzo Abe seems to be going the right way after implementing the first two of his “arrows” which focused on fiscal and monetary policies. What remains to be done in this matter, is work on the “third arrow” of structural reform, the significant but missing piece of the puzzle. The successful liberalisation of the energy markets may benefit shipping, but more work is still needed to deregulate the labour market to make the economy stronger.

As we are still to see the anticipated positive effects from the original “three arrows”, PM Abe announced during 2015, “three additional arrows” to move the nation forward: strong economy, support for families and social security. Whether those arrows will create a turnaround is yet to be seen. What has shown itself is that the original “arrows” so far, have failed to turn around its economy as Japan went into its fourth recession in five years, with Q2-2015 GDP growth at -0.7% and Q3-2015 at -0.8%. 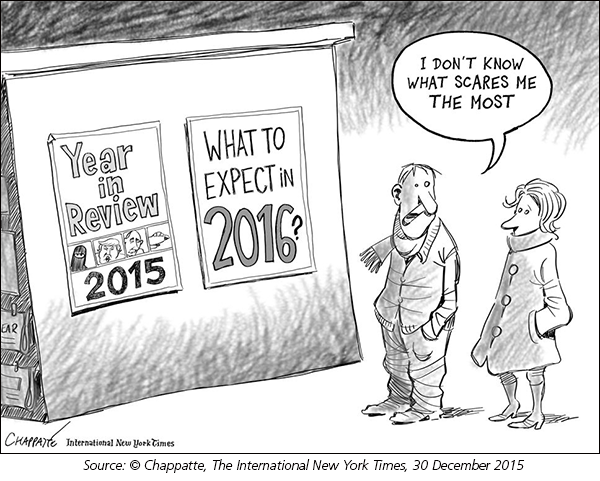 The sluggish inflation rates remain a global issue, not just a European one. December inflation for the Eurozone showed an increase of just 0.2% against the European Central Bank‘s (ECB) target of around 2%. We have not seen inflation at or above the target level since 2011-2012.

Over the past year, the Euro has lost 8% against the US dollar and 3% against the Chinese Yuan. Exchange rate volatility is, once again a big influence on international trade.

Europe remains split, with struggling economies in the south and stronger economies in the north. On top of that Europe is finding the refugee and migration crisis difficult to handle and politicians are at risk of losing focus on improving the economy this year. Luckily, the ECB continues to support the market, handling low inflation, and low interest rates.

Households in the European region saw consumption rise by 2.2% in Q3-2015, unchanged from the previous quarter. If consumers keep spending while governments increase spending as they take care of the refugees and migrants, we could see stronger growth in Europe in 2016. BIMCO sees Europe and Japan as potential positive stories in 2016, standing out from an otherwise dismal outlook in most regions. 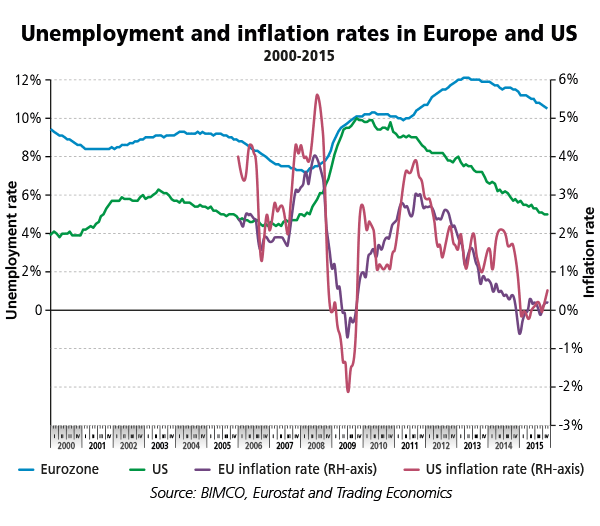 The year has started on thin ice and with mixed messages from economists, ranging between there being a new financial crisis around the corner to much calmer statements. The likelihood of a solid and steady growth path throughout the year in all nations of the world can swiftly be dismissed.

In addition to the various economic issues, we also have a good deal of regional geopolitical tensions right now, involving (amongst others): Iran and Saudi Arabia, North Korea, Russia and Ukraine, Islamic State and the neighbouring regions. Underlying all this bad news –fortunately- is the fact that the world economy is moving forward.

It’s not only politics that shape the future, changes to commodity prices and economic structures may do so too. Saudi Arabia has aired a 5-year plan to restore its economy. The drop in oil prices means that revenue has dropped significantly and huge public deficits mean that Saudi Arabia is now considering a new way to run its economy. In 2015, they tapped into the global bonds market for the first time and now look to float a part of the state-owned Saudi Aramco, which is the world’s largest oil company. A lot of commodity exporting nations are facing challenges like this.

According to the World Bank, major advanced economies are going to increase their contribution to global GDP growth during 2015-2018 - but the opposite is true for commodity exporters who are suffering due to low commodity prices.

Historically, growth in advanced economies has generated more trade than growth in emerging markets but that is not guaranteed going forward. What we know from the last few years is that the trade multiplier on economic growth has decreased from the level we saw before 2008 and we have yet to see any improvement on that. 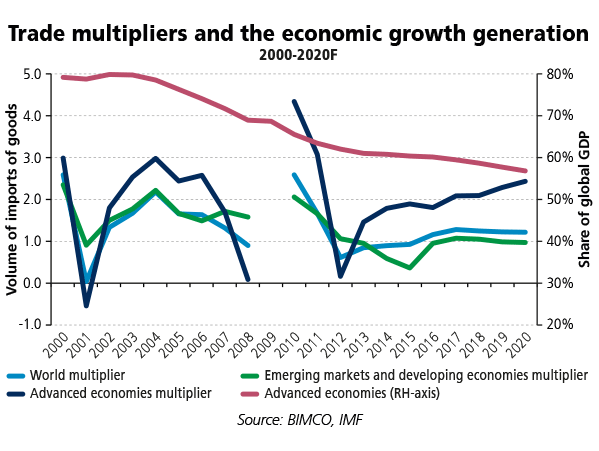 Contact online
BACK TO: Container Shipping: A difficult market is helped along by low supply growth in 2016 NEXT: Dry Bulk Shipping: A miserable start to a new year, where the market struggles to grow at all